Raksha Mantri Shri Rajnath Singh inaugurated Border Roads Organisation (BRO) Tourism portal (https://marvels.bro.gov.in) in New Delhi on March 24, 2022. The user-friendly website aims to facilitate e-booking of guided tours to the road infrastructure projects constructed by the BRO. In the initial phase, only e-Booking for guided tour to Atal Tunnel, Rohtang will be available through the portal. Soon, infrastructure projects in Ladakh, Jammu & Kashmir, Sikkim, Arunachal Pradesh etc. will be included for guided tours. World’s highest motorable road at Umling La Pass, state-of-the-art bi-lane Sela Tunnel and Nechiphu Tunnel are among the projects which will be included.

The first ticket from the website was presented to the Raksha Mantri by Director General Border Roads (DGBR) Lt Gen Rajeev Chaudhry on the occasion. Shri Rajnath Singh, in his address, appreciated the efforts of the BRO in developing the portal and exuded confidence that the website will go a long way in boosting tourism in far-flung areas. The website contains photo and video galleries of tourist destinations and local flora & fauna, besides providing information about the BRO, the nature of works it has executed in border states and the challenges faced. It also hosts technical information related to construction for those working in the field of civil engineering, especially students and academia. The Raksha Mantri said, in the coming times, it will be the most accessible & reliable source of information about the history & importance of the projects executed by the BRO and will provide a peek into the upcoming projects as well.

The Raksha Mantri commended the BRO for playing an incomparable role in promoting tourism in these areas, saying that after the construction of Atal Tunnel, the number of tourists in that area increased six times. He made special mention of the setting up of BRO Cafes at 75 places in far-flung areas, expressing confidence that these cafes will provide basic amenities to the travellers, promote tourism in remote areas and strengthen the local economy.

Shri Rajnath Singh also praised the BRO for constructing more than 60,000 kilometres of roads, 850 major bridges, 19 airstrips and four tunnels over the last six decades, thereby playing a vital role in nation building through infrastructure development in remote and inaccessible areas. He stressed on the importance of connectivity and infrastructure in the development of the nation, saying that roads, bridges and tunnels in border areas play a central role in ensuring their socio-economic development of the region, besides catering to the needs of the Armed Forces.

The Raksha Mantri appreciated the fact that the far-flung areas are now witnessing reverse migration, wherein people who had left their villages in search of employment, education and better health facilities are returning back, seeing the development in these areas. He spoke about the Huri village of Arunachal Pradesh, the residents of which returned after the BRO ensured connectivity with the district headquarters. “Atal tunnel and Umling La pass are the biggest achievements of the BRO which have put India on the world map. The BRO is striving towards realising Prime Minister Shri Narendra Modi’s dream of ‘Aatmanirbhar Bharat’,” he added.

The Raksha Mantri emphasised that tourism and travel industry are one of the biggest job and wealth creators in the world and the Government has taken a number of steps to promote tourism in the country. “‘Incredible India’, ‘Adopt a heritage – Apni Dharohar, Apni Pehchaan’, ‘Swadesh Darshan’, ‘With love from North East’, ‘Dekho Apna Desh’ and ‘Udan’, are some of the schemes that aim to ensure all-round development of the country. These efforts will ensure increased connectivity, strengthened security system, developed tourist destinations and creation of employment opportunities,” he added. 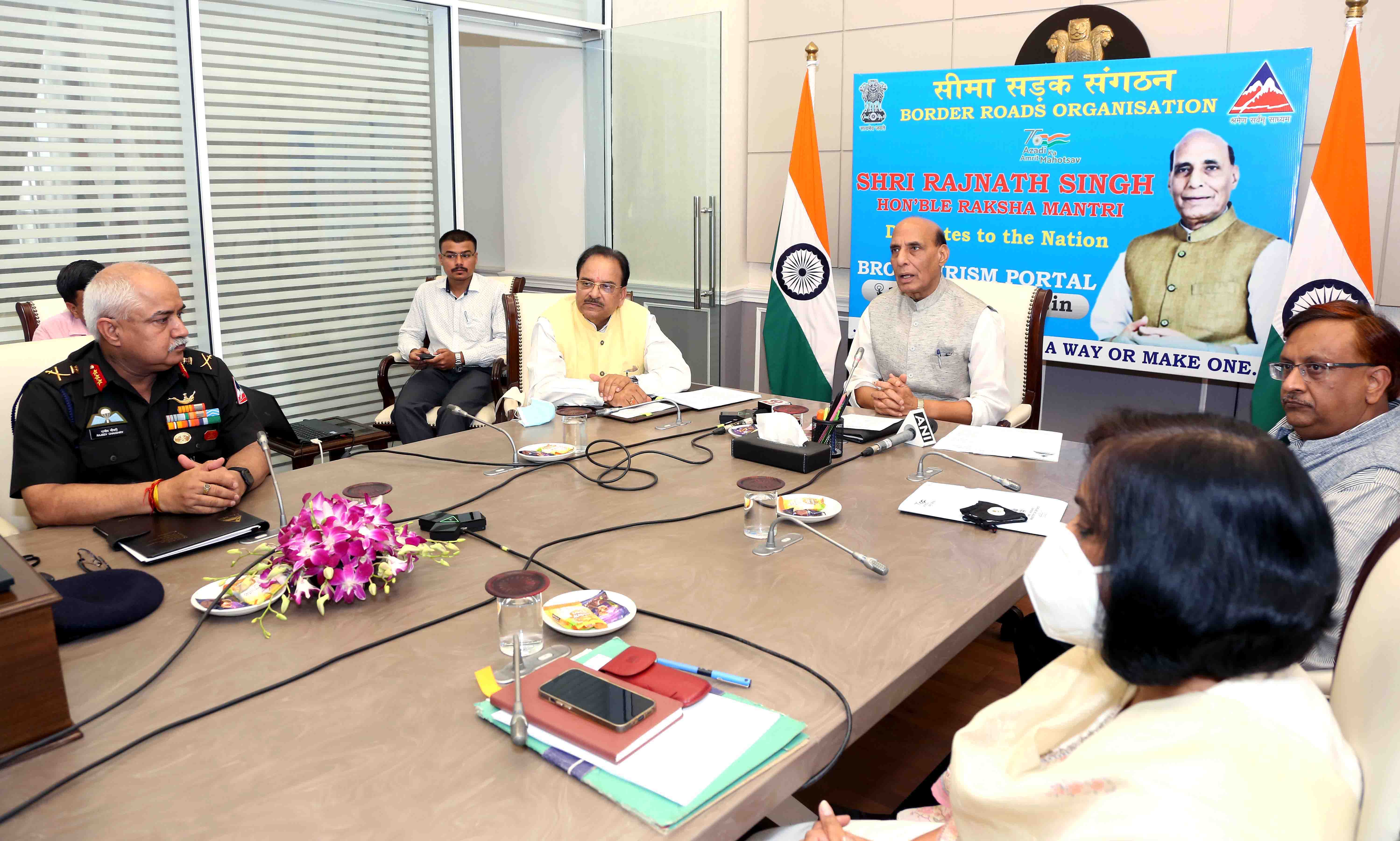 Pointing out the willingness of people, especially the youth, to connect with the subjects related to defence, Shri Rajnath Singh urged the officials of Ministry of Defence (MoD) to devise a plan to promote defence tourism. He suggested exploring the possibility of organising visits to historic battle fields, war memorials, war museums, training academies or other similar defence establishments for people with the help of industry, start-ups and ex-servicemen, keeping in mind the security and sanctity of the places. This will instil a feeling of patriotism among the people and generate revenue at the same time, he said.

In his introductory remarks, DGBR Lt Gen Rajeev Chaudhry said, the website will enable the people to conveniently plan a visit to the places which have become popular among tourists and the academic fraternity. Raksha Rajya Mantri Shri Ajay Bhatt, Financial Advisor (Defence Services) Shri Sanjiv Mittal and other senior officials of MoD were present on the occasion. BRO personnel and representatives of tourism & travel agencies joined the event virtually.