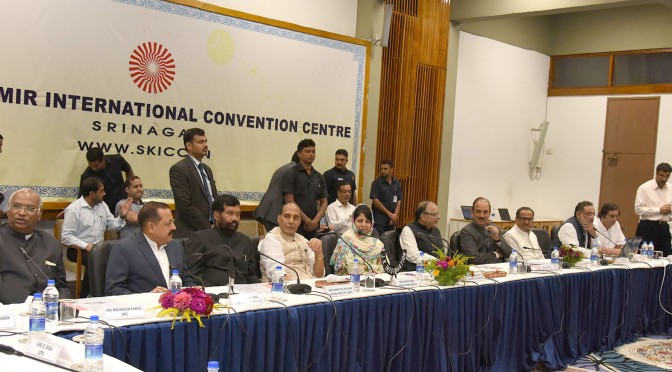 An All Party delegation led by the Union Home Minister Shri Rajnath Singh reached Srinagar today. Before leaving for Srinagar, Shri Rajnath Singh said that we intend to talk to individuals and groups who want peace and normalcy in the Kashmir valley. The delegation is on a two-day (September 4-5, 2016) visit to Jammu and Kashmir.

During the first day of its visit, the delegation met about 200 members in about 30 delegations from various sections of society and listened to their point of view to reach at a common solution to the current scenario in Jammu and Kashmir.

The Home Minister chaired the meeting of All Party delegation which was attendend by Jammu and Kashmir Chief Minister Ms Mehbooba Mufti. During the meeting, a detailed presentation was given by the State Government highlighting various issues related to the current scenario in Jammu and Kashmir. It was emphsasised that a clear roadmap needs to be drawn with a focus on the way forward. It was also stressed upon that the recommendations of Working Groups and Parliamentary delegations need to be considered.

While interacting with the delegation, Ms Mehbooba Mufti said that Kashmir is a common issue of national interest and should not be viewed as a political issue. All the parties agreed to this fact and emphasised that steps need to be taken to restore normalcy and peace in Kashmir at the earliest. CM of J&K also thanked all the parties for visitng the state to listen to the problems of people of Jammu and Kashmir. She also thanked the members for holding discussions on the issue of J&K in Parliament. Ms Mehbooba Mufti emphasised that media needs to be sensitive while reporting on such issues like the current happenings in Kashmir.

In addition to the political parties, delegations of academicians, teachers and student assciations, representatives of school management, prominent NGOs, representatives of Leh, Kargil, Pahari associations, Gurudwara Prabandhak Committee, Fruit & Saffron Growers associtions, Civil Society etc. also met the All Party meeting visiting Srinagar. The Jammu and Kashmir Students Welfare Association informed the All Party delegation that they are willing to work with Government of India, hand in hand and shoulder to shoulder to bring normalcy in the state.

The delegation will meet the Governor of Jammu and Kashmir Shri N. N. Vohra later in the evening today.

The All Party delegation will visit Jammu tomorrow after meeting different civil society delegations in Srinagar in the morning.