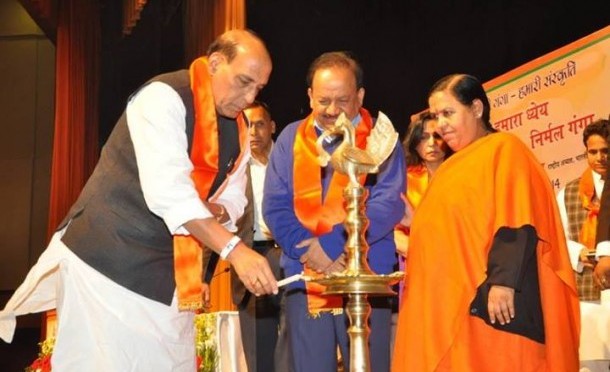 I cordially welcome to our respected sister Uma Bharti Ji, Dr. Harshvardhan Ji, Shri Anit Singh Ji and all my respected brothers and sisters presenting here in seminar hall. I suppose not to detail about Maa Ganga as you all are well aware; and even I can’t say that I know much about Ganga. I, you and the whole nation is worried about the pollution increasing in Ganga. To control the pollution in Ganga, the ‘Ganga Action Plan’ was formed in 1985-86 ensuring the clean Ganga by then government else reversible reaction could be taken against the growth of nation. Since then whither I know approximately 1500 crore rupees has been invested and recently, might be the World Bank decided to invest 2600 crore rupees to keep Ganga clean.

We know that India is our eternal nation and the Ganga is our most sacred river. Eternal nation is known for two reasons only, first Sages and second farming; therefore, the Ganga has its greatest contribution to form India eternal nation undoubtedly. As if Sages are the symbol of cultural development, so as the farming is registered with the symbol of economic, social and physical growth and happiness of the nation. So the Ganga has tremendous contribution to form our nation’s eternity and reflects our culture, traditions and mythology all over the world. A foreigner author I L Wassom has written in his book if we need to understand the Indian culture then we needs to see the society developed by the bank of the Ganga.

An as we know that India has never been worried about its economic growth only but cultural and spiritual growth as well. If India was known as the master of world, if it was given the name as the Golden bird and if India was flooded with milk; then it was just because of that India has developed itself on the both aspects, the economic terms as well as in the spiritual terms. And, the Ganga has been credited for both of the aspects achieved since so far.

I do completely believe that just to gain the luxury only, with our sinful deeds and actions Ganga got polluted and turpitude. We all need to take an oath to keep Ganga clean and sacred as it was. Moreover, we believe that the responsibility given to Uma ji to keep Ganga clean would be succeed very soon because Uma Ji has the Golden touch. I know that Ganga is not incarnated easily on the earth; Bhagirath made great efforts for it. Therefore, we too need to have the Bhagirath efforts to keep Ganga pure and clean.  BJP is completely prepared for it and surely we will do it as soon as we make our government. According to my point of view, by spending funds only can’t make Ganga clean and pure but by spreading water too shall make it done. So, increasing the volume of water level, Uma Ji has the clear action plans. And not only we shall deploy the plan made by Uma ji, but also amendments shall be done if needed to ensure the complete success. I know well that it is well understood the importance of rivers across the Globe where ancient culture exists. The people of London took an oath to make Themes River pure and cleaned as it was polluted much in 19th century. Since then it is overcome. In continuation to the oath taken BJP would deploy schemes and action plans ensuring our holy Maa Ganga should not be polluted anymore.

You know well the importance of the holy water of Ganga. It contains largest amount of Oxygen than any other Rivers, that’s why no Maggots are found in the holy water of Ganga. Our great scientists and sages knew the scientific reason behind that at the early stage. Sometimes I am much surprised to know the scientific approach and great knowledge of our ancient sages and scientists and on the basis of same I believe that the knowledge spread over the world derived from here only in India and to prove it there are great numbers of instances existing. In our national council, once I have given the example for same as the Law of Indefinite produced by Hiesenberg. Our scientists always used to say that this kind of knowledge exists in foreigners only; but when a friend of Hiesenberg, Mr Fiz Coopera once asked Hiesenberg that from where he got to know the root of this principal, and then he simply replied from India while discussing with Ravindra Nath Tagore over Vedanta. From there only I got to know about the basic fundamentals of Indefinite Principals. Therefore, I believe that we are far ahead in the terms of Knowledge and Science than rest of the world. But today, our young generation doesn’t know much about our culture, science, traditions, and ancient knowledge; then, I believe that there is a need of government who can sustain, protect and spread these all things. Today in order to strengthen our belief, we all are united to protect Ganga; therefore, I rest you assured that we shall support enormously this campaign by every mean Physically, Mentally and Financially. And I believe that our mission and efforts will be successful very soon. Jai Hind Jai Bharat.