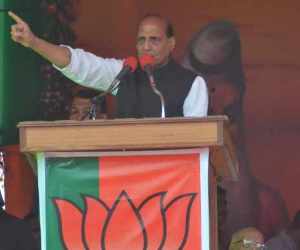 Speech of Shri Rajnath ji on the foundation day of ‘Patanjali Yogpith’.(05/01/14)

At first I congratulate Baba Ramdev and Aacharya Balakrishnan on the 21st foundation day of Patanjali Yogpith. On a very auspicious day, I welcome the crowd who are present in huge numbers. My friends, first of all I would like to recollect you all that ‘Bharat Swabhimaan’ was established so as to make India the golden bird again. Today if a political party has damaged India that is Congress Party. Congress is the only party that is responsible for the disastrous situation in India. 67 years after independence has passed by and congress has ruled for the maximum 55 years but still the nation has been suffering from financial crisis. Mahatma Gandhi after freedom said that Congress must be dissolved but it remained in existence now what the situation is going on, everyone knows that.

My friends, in the congress rule the country has only seen inflation, corruption, poverty and only one family is responsible for all this. When BJP was in power and Shri Atal Bihari Vajpayee was the Prime Minister that was the only time when the country noticed the highest GDP growth rate. India was at one time a current account surplus country but now it is current account deficit country.  BJP is not only confined and dedicated for the economic growth of the country but the party also believes in spiritual growth. India is known for its spirituality and surely will regain that position again.

When BJP was in the Center then 6 crore people got the benefit of employment, whereas only 27 lakh citizens got employed though congress has been in the center for such a long time.

Pakistani Soldiers cross the line and kill our soldiers brutally. On the other hand China makes a possession in our area, our ambassador gets arrested, and this is what congress has given to the country.

In states like Gujarat, Madhya Pradesh and Chhatisgarh, where BJP has been in power, people have only seen development and good governance. Gujarat’s development model is the best example for that.

Political analyst not only in India but all across the globe have expressed that if BJP gets back to power again then Indian will come on the right track again. I and my party firmly believe in change. A Change in politics, system, administrative and judiciary. Corruption is the major problem that the country is facing today. Black Money is also a challenge for the country today and has affected the reputation of the nation and we are committed to overcome and take the necessary steps regarding Black Money.

I just appreciate Baba Ram Dev for his excellent thoughts over nation. On the issue of taxation, I feel that the burden in the form of tax on the citizens must be lessened and when BJP government will come to the power we have to make policies on it.

When I was agriculture minister in 2003 then a scheme for farmers was finalized so that they get secure. The scheme was ‘Farm Income Insurance Scheme’.  When BJP will come in power again then it will be implemented soon.

On the issue of languages, I want to say that when I was education minister in Uttar Pradesh, I felt, ‘primary education must be in Indian Languages’. The language has an impact on a person’s thinking and perception. And how Indian languages can be brought forward will be considered in a positive way.

My friends… BJP is dedicated for the development of this country. I have full confidence in Shri Modi and believe that he will serve the best and India will see development.

At last I want to again thank Yog-guru Baba Ram Dev for this great cause.