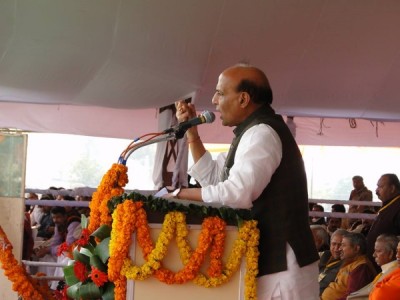 First of all I cordially welcome in the premises of central office to every hard party worker of Social Justice Front. Why this Social Justice Front was needed to be organized? According to the explicit ideology of BJP; we can’t make our dream come true to make India prosperous, powerful, and self-proud unless each and every groups of the society is grown and self-dependent, and to achieve this aim BJP has decided to form the Social Justice Front. It has been quite tragic not to overcome the poverty, unemployment and others awful situations getting more worst instead since 67 years of independence whether we have ample of different shades of society in India.

Therefore BJP has thought to consolidate the every group of society together and making them belief in our ideology of One India. We want the politics of unity and not the separation. At the cost of separation one might win the elections but will lose the faith of nation. We believe in our ancient culture of India which led love, respect and care to everyone, for everyone, with everyone and by everyone no matters if anybody belongs to what social level or group? We can see in our scriptures and mythology that our great saints and personalities like Maharshi Vyas Ji,  Sant Ravidas Ji, Sant Raidas Ji, Brahmarshi Vishwamitra Ji was borne from schedule cast or tribes of then but they all lit the light of knowledge, love, respect, care, growth, peace and harmony in the society. But nowadays, these cultures and traditions are being forgotten.  BJP is working with the concept of ‘Novelty construction over Ancient base’, without this concept it is totally impossible to gain the desired growth and development of nation.

There was a time when India was known as ‘The Golden Bird’ and presumed the milk flooded country in the world. Nobody was reported dead due to hunger because the society was full of prosperity. And as for as the education is concerned of that time, it was clearly stated in the history of Bombay Presidency and Calcutta Presidency that the sweepers who were called ‘Dome’ at that time were also taught and many of them became famous on the basis of their talents and abilities accordingly. There were no partialities in the society on the basis of cast; creed or dynasty because of cultural values which set standard that a person becomes great by owns deeds not by cast, creed or dynasties. Such kind of instances exists in political references as well. I won’t project prior examples but one of the current examples is before all of us. Undoubtedly the most popular political leader in today’s scenario across the country is the one who used to help his father on platform to sell the tea, belongs to schedule group; but became three times Chief Minister being in BJP. Respected Kalyan Singh Ji, Shivraj Singh Chauhan Ji, became Chief Ministers on the basis of their abilities only.

BJP thought that nation needs a leader who has guts to make quick decisions, who has strong foresight and vision, who must be courageous so that we nominated Shri Narendra Modi as BJP’s Prime Minister Candidate. If we look in to the political scenario of Uttar Pradesh it clears that there is only one person or family is completely holding everything regardless to Congress, SP or BSP. No other person even can think to be designated as Chief Minister or any decision making positions.  And as for as the Congress party is concerned, nobody can be either the Chief Minister of any state or the Prime Minister of India without consent of family special. This approach is possible only in BJP that’s why we have formed the Social Justice Front. If I talk about in the reference of Uttar Pradesh, Shri Hukum Singh Ji being the then Energy Minister of Uttar Paradesh, is witnessed for what I said to him being the Chief Minister of Uttar Pradesh. I said that there are a lot more schedule casts and tribes who are not getting the benefits of reservation policy resulting them undeveloped below standard life style so I have thought to ensure their reservation at the very best and earliest.

But though I was the Chief Minister for a very short span of time that’s why I had to make that done at the earliest. And I knew if the law is functioned once it shall not be overruled.  Friends, few would say that it was the time of elections that’s why I did that; therefore, once again I would like to make an appeal that BJP does politics to build nation not to build its government only.  When that discussion was being held I said to Shri Hukum Singh Ji that I want the complete report within 2-3 months only and I must appreciate to Shri Hukum Singh Ji who replied me that within 2 months the report would be submitted and he did it in the said time. He made all the Lekhpals and Patvaries at work and completed the report. A booklet of that report was published and I believe that many of you must be having the same. And finally when I made the proposal on the basis of report submitted to ensure the reservation of schedule groups, dear friends, it was SP whose all the elected members resigned from Legislative assembly to protest that bill.

Should these people stay in politics anymore? But I have decided that the bill shall be submitted before the assembly and shall be converted in to the Law, and finally with the signature of Hon’ble Governor it was done and functioned. But as soon as the BSP came in to the rule, Mayawati Ji abolished the functioned law forcefully. I tried my level best to fetch this issue in court. I filed a petition there; now after a long time a decision came out and the Honourable Court admitted itself that the in justice has taken place in this issue. If anybody else other has BJP has file any petition favouring schedule groups, Shri Karpuri Thakur did it in 1978, and you shall be surprised knowing that I went myself to participate in Karpuri Thakur’s anniversary this time in Patna.

Dear friends, our parliamentary board admits that every necessary step should be taken to ensure the development of these caste and groups without any hesitation. The book describes everything how the development of these groups to be done? How can we provide them the employment on the basis of their abilities and also how can we make them secured and self-proud? BJP is the only political party ensuring the social justice; therefore we have tried once to achieve our aim by forming the Social Justice Front. I would like to say Prakash Ji to form this type of committee on All India basis to study the social justice. This study group should be responsible to study the problems, grievances and issues of different groups and find out the better redress. A complete report should be monitored in this regard.

I know well that the task is big and big deals take time as well but I believe if BJP gets the full support of every groups of society, No forces can stop us achieving success in coming election of 2014 and this is said by top survey companies. Undoubtedly BJP is has emerged most favorite and credible party in India and Narendra Modi is the most Popular Leader of India. Remember that the day BJP win Delhi no sooner we will be in the largest state Uttar Pradesh as well.