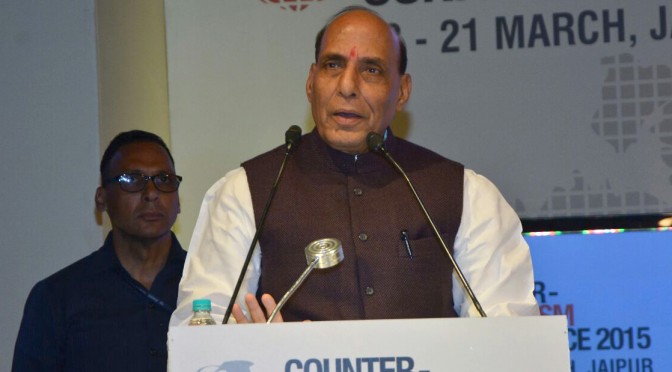 It gives me pleasure to deliver the inaugural address of this International Counter-Terrorism Conference. It is also heartwarming that India Foundation and Sardar Patel University of Police Security and Criminal Justice are organizing this Conference. Today, when much of the world is trying to grapple with the menace of terrorism, this Conference being held to deliberate on ways and means to counter terrorism is a welcome initiative .

A galaxy of counter-terrorism experts from several countries are gathered here. The timing of this Conference is apt, since the world is witnessing an entirely new paradigm of terrorism in the form of the Islamic State (IS). Never in the history of mankind, has a terror outfit controlled such a large geographical area, generated such huge funds and has been immune to world public opinion regarding its atrocities on innocent people. The appeal of ISIS to young, educated people, inspite of its medieval ideology, is a cause for concern to the global community. I hope this Conference analyzes this phenomenon and suggests policy prescriptions .

Terror outfits like ISIS do not believe in a plural society and are extremely intolerant of a liberal and secular democratic order. They do not accept the fundamental fact that diversity of faiths and philosophies reflects the inherent beauty of human beings. These terrorists unleash the worst forms of violence to erase the diversity and destabilize the democratic order. Mass killings of people of other faiths and mass enslavement of women by the ISIS and Boko Haram – who belong to this category of terrorists are frequent occurrences these days .

In their endeavour to shape a future for mankind according to their dangerous dreams, they do not even spare the past. They vandalize the secular heritage of mankind left in the form of art and craft.   Destruction of Bamiyan Buddha by Taliban in Afghanistan and the pre-Islamic relics by the ISIS in Syria and making a big spectacle of such destruction by posting their videos on internet reflect their utter depravity .

These terrorists are adept at using the latest technologiesto propagate their beliefs and deeds. They extensively use modern technology to reach out to wider audience with susceptible minds. Their online propaganda is causing online self-radicalisation among youths. It is a matter of serious concern that they are seeding the minds of innocents with poisonous provocation and inspiring them to be brutally intolerant and violent with others .

However, at the same time, I am happy to note that the influence of Islamic State on the Indian youth is negligible. According to our intelligence agencies, just a handful of Indian youth have joined the ISIS. Some have also returned after being persuaded by their families .

The failure of ISIS to attract Indian Muslims, who constitute the second largest Muslim population in the world, is due to their complete integration into the national mainstream. Indian Muslims are patriots and are not swayed by fundamentalist ideologies. Extremism is alien to their nature. Moreover, India, as a country is proud of all its diversity. I am happy to note that India has the second largest population of Muslims in the world after Indonesia. India is home to all 72 firqas of Muslims and it houses one of the oldest Church known to mankind in the world. We have been practicing the philosophy of peaceful coexistence for centuries .

We also need to be concerned over the increasing possibility and opportunity to use available technology and cyberspace in a destructive manner. The computing power of your smartphone is greater than all the computing effort deployed to put a man on the moon in 1969. The menace of terrorism is greatly amplified in today’s digital world. An incident in one corner of the globe can instantly spark a reaction thousands of miles away; and where a ‘lone wolf’ or a ‘DIY (Do It Yourself) Terrorist’ can go online and learn how to carry out an attack without ever leaving home. We have recently constituted an expert committee to look into all possible avenues of cybercrime and its linkages with the terrorist world .

The source of most terrorist activity in India lies across our borders. It is unfortunate that even after paying such a heavy cost for itself, Pakistan and its associates find it difficult to understand that there are no ‘good terrorists and bad terrorists’. Differentiating terrorists into ‘Good’ and ‘Bad’ categories has failed miserably. If the ISI and the Pakistan army stops its support to certain terror outfits, I have no hesitation in saying that the security situation in South Asia will improve significantly. I sincerely believe that the Pakistan should seriously rethink its strategy of using terrorism as an ‘instrument of proxy war’ and it would be in her own national interest .

India has been a victim of cross border terrorismfor the last several decades. Terrorists organisations like Laskhar-e-Toiba and Jaish-e-Mohammad etc., patronized by those across the border, have inflicted several acts of terror on the Indian soil. There are several instances of such proxies being used in other parts of the world .

Terrorism knows no boundaries and doesn’t respect nations’ sovereignties. They have become trans-national in character. They use modern technology to propagate their ideology and perpetrate violence. They are exploring new frontiers to inflict terror such as cyber terrorism and use of chemical, biological and radio-active nuclear devices .

Since terrorist outfits do not recognise national boundaries and acts of terror are executed often through networks spread over several countries there is no alternative to forging international cooperationto effectively counter it. Such co­operations are required in the field of intelligence sharing to pre­empt terrorist threats .

International Co-operations are also imperative among the law enforcement agencies of different countries for post-event investigations to bring the terrorists to justice. International co-operation is also needed to build popular opinion and pressurise the countries that use terrorists as their strategic assets .

I understand that this Conference is also discussing issues related to India’s internal security like the Left Wing Extremism and Border management. I will keenly await your recommendations on these issues so that I get a non-governmental perspective for policy formulation .

This brings me to the next issue of the role of think-tanks and non-governmental organizations in positively influencing policies of the government. It is my opinion that the government should benefit from as many strands of opinions as possible, to formulate policies. The inputs of security experts and think-tanks, at present, have little or no influence in policy formulation in India. I want this to change. I feel that the government should benefit from your expertise and knowledge. Also, the think-tanks have an important role in developing strategic culture in India by aiding informed discourse on national security issues. Hence, I once again welcome this initiative of the Rajasthan Government in partnership with the India Foundation .

Finally, I am given to understand that one whole day is devoted to discussions on global terrorism. This is important since the lines of local terrorism and global terrorism are getting blurred. In many ways, international terrorism today is an unintended outcome of the process of globalization. Hence, all countries should be aware of developments in this area, which is bound to affect them in some way, sooner or later. Also, this brings me back to my earlier point that all nations should be on the same page to tackle terrorism and there cannot be any discrimination in this regard. With these words, I wish this Conference all success .