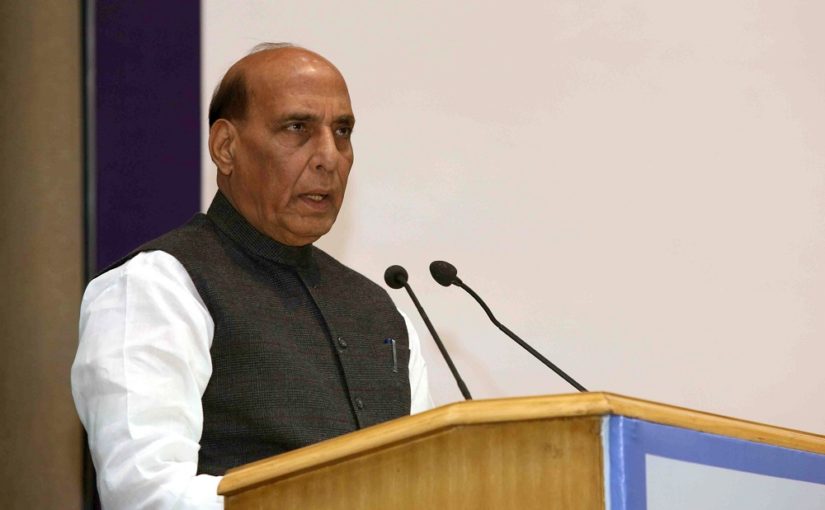 It gives me great pleasure to be amongst the larger fraternity of the armed forces and particularly the air warriors who were part of the planning and execution process of the Balakot operation. I am sure that your deliberations during the day will contribute towards better understanding of events and facilitate in improving our response options in the future as well. I saw with interest the names of a number of experienced and seasoned speakers on the seminar panels. I look forward to receiving important takeaways from their presentations and follow-up discussions.
On this momentous occasion, I would also like to remember the sacrifices of the armed forces in the service of the Nation and pay homage to those who have laid down their lives, so that we can continue to celebrate every moment of freedom and peace in every corner of the country.

I will also like to reaffirm that the sacrifices of the jawans at Pulwama will never be forgotten. I wish to convey my personal gratitude to the families of the CRPF security personnel who lost their fathers, brothers, husbands and sons and convey to them the support of the government. I would also like to assure them and every citizen of India, that we will remain ready and willing to respond appropriately to any threat to our national security in the future as well.

Today the world remains committed in the fight against terrorism and stands shoulder to shoulder with India in forcing countries like Pakistan to bring terrorists to justice. We have recently seen the impact of collective diplomatic and financial pressure on Pakistan. Terrorist like Hafiz Saeed who were treated like VIPs and heroes, have been placed behind bars. We realise that this is not enough and unless Pakistan is made accountable, it will continue with its previous policy of duplicity and deceit. All attempts are being made to work in this direction.

For long, India had been seen as a country that did not respond adequately to terrorism despite grave provocations. The surgical strike of 2016 and air strike of 2019 at Balakot changed that perception once and for all. These actions were not only resolute military strikes against terrorism and terror supporting elements. These operations also conveyed a strong and unequivocal message that went beyond its immediate impact. Let me try and put that in perspective today.

First and foremost, Balakot reflected our approach against employment of terrorism as a low-cost option against India. It also indicated that terrorist leaders, terrorist infrastructure and terrorist training facilities in areas beyond the Line of Control (LoC) and the International Border (IB), when employed against India, will no longer be a safe haven. It was made amply clear that terrorism will not remain a low-cost option that can proliferate under veiled threats and bogeys that have repeatedly been voiced by irresponsible and ill-informed leaders from across the border.

I have little doubt that the Balakot strike forced the rewriting of many a manual and rule book across the LoC. Those who preferred to place India in an imaginary understanding of the past, were brought into the reality of the present and its potential manifestation in the future. For those who bracketed India’s actions into predictable options, the out of the box reality of our response may have given more than one reason to pause and reconsider future misadventures.

These actions not only received the overwhelming backing of our countrymen, it also received support from countries across the world. The responses affirmed our stand and the right to defend ourselves against terrorism. Attempts at obfuscating reality were rejected unequivocally. Similarly, efforts to garner support on narrow and limited regional and religious lines also drew a blank. This was a sign of changing times. The world stood as one against terrorism and its employment for perceived strategic gains. One year down post Balakot, I would again like to thank all our partner countries, friends and well-wishers, who recognised the challenge posed by terrorism to be greater than narrow parochial pronouncements.

Our approach to terrorism therefore, was and will remain a judicious combination of clinical military action and mature and responsible diplomatic outreach.

I remember the debate post Balakot vividly. However, I feel that in certain quarters, the big picture often got side-tracked and instead issues that were relevant but less important took centre stage. I feel, one year later, this is an opportune time to discuss the operation in all its manifestations dispassionately. Time and distance often provide greater objectivity and realism.

There is little doubt about the importance of the Balakot strike, as a singular event of military precision and impact. As I said earlier, it has possibly led to the rewriting of many a doctrine across the LoC. However, it is equally important to understand what it represents as a statement of intent and capability.

There are countries that spend multiple times of India’s defence budget. There are also countries that have more sophisticated and modern weapons and aircrafts. Perhaps there may also be airmen and soldiers who are trained and dedicated. However, unless this is backed by the requisite intent and capability to deliver, efforts don’t necessarily succeed. Balakot is a successful example of how these two critical elements of national security combined effectively. However, our endeavour did not stop at Balakot, nor did it reflect the culmination of our ongoing efforts. It was an important milestone in our quest to maximise our capability development in as efficient a manner as is feasible.

Balakot will continue to reiterate India’s intent to employ the most appropriate resources for the intended impact, with an element of unpredictability and innovation as an integral part of the endeavour. It is this factor that must remain uppermost in our minds rather than a count of numbers. Balakot must teach us to think strategic rather than tactical. It must indicate that an operational victory is won on the ground, however the war must be won against the enemy’s mind. We are engaged not merely in a clash of weapons but more importantly in a clash of wills. And I have little doubt that the collective will of 1.3 billion people supported by justice and righteousness will ultimately prevail.

I also feel that there is a need to analyse and study the impact of seizing and retaining initiative in a long drawn strategic competition. It is relevant to assess the utility of force in an environment that is fast evolving. It is critical to challenge and question situations and solutions that dictated our actions in the past. For the future has a bad habit of rarely repeating its legacy situations.

Balakot represented the first time that Indian aerospace power was put into offensive use across the border since creation of Bangaldesh in 1971. In the last fifty years, the security scenario has transformed and more so in the last two decades. Kargil and cross border terrorism incidents are examples of this new kind of warfare. Hybrid warfare is a reality now and a mix of kinetic and non-kinetic tools is a real threat. In this transforming conflict scenario, there are neither clear cut beginnings nor ends. In fact, the definition of conflict space is also ambiguous.  I will touch upon three major aspects that need emphasis.

First is expanding battle space. In yesteryears, war was almost always across national borders and had restricted geographical space for conduct of force on force battles. But that has changed with induction of long-range weapons. Now striking deep inside enemy territory bypassing intermediate obstacles and objectives is a possibility. This primarily means that battle space now encompasses the entire country and also important lines of communication for trade and supplies. Another aspect that has gained traction is identifying and hitting sources of power not necessarily located within the countries in direct conflict.  And in all these, aerospace power plays a defining role as exemplified by an attack in September 2019, on Abqaiq-Khurais refineries, and in January 2020, killing of Qasem Soleimani in a UCAV attack. On one hand, these have demonstrated the strategic significance of employment of combat aviation that is significantly defining and shaping the combat environment. And on the other, it means we need to monitor vast areas for possible signatures of impending strikes. We need focused approach to comprehensively enhance battle space transparency. Aerospace power has to play a pivotal role in this.

Second aspect is about time compression. The missions have near real time planning cycle. There will be small windows of opportunities to unhinge any entity that intends to disrupt peaceful progress of our nation. That means a force like IAF has to be ready to deliver decisive blows at very short notice with precision and minimal collateral.

And the third aspect is about technology infusion. Aviation, in general, and military aviation, in particular, is heavily dependent on technological changes.  On one hand, technological developments are resulting in sensors with greater sensitivity and range and, on the other hand, higher speed and volume of communication is permitting dispersal, diffusion and expansion of battlespace. The balance is gradually, but definitely, tilting in favour of the aggressor and first-mover advantage is increasing. In such a scenario, Artificial Intelligence, high-speed weapons (hypersonic) and space-based sensors and tools will have a significant impact. These aspects will also redefine the role played by kinetic forces. While manned combat aviation has ceded some space to unmanned combat aerial vehicles, in the combat support aviation this is much more pronounced. Gradually unmanned aircraft and systems will undertake a majority of combat support missions. The entire human resource matrix and training has to undergo major change to cope with this transformation.

The technology infusion in kinetic and non-kinetic capabilities at very low cost has given states and non-states actors a capability to initiate offensive actions. This means a very high cost for creating defensive mechanisms to protect our interests and values. Here we not only have to imbibe new technologies but have to use existing capability in innovative ways. Here comes the role of air warriors like you all. We as a nation have no doubt about your valour and courage and are proud of you all for your activities and sacrifices in protecting all of us.   We need to reorient our training to meet the challenges that hybrid warfare has brought.  As far as governmental support is concerned, I assure you that all resources required will be provided to our armed forces.

Organisationally, we have initiated some major structural changes in the way we intend tackling threats to our nation. It will take some time for the entire set up to be fully operational. This transition time is crucial and we need to keep the guard up. All stakeholders need to contribute in making these changes effective and efficient. Of course, there will be some teething problems in the initial days. We need to be ready for these and use our professional knowledge to find suitable and effective solutions.
Let me once again thank the organisers of this seminar for initiating deliberations on a very timely and appropriate theme. My best wishes for further deliberations.