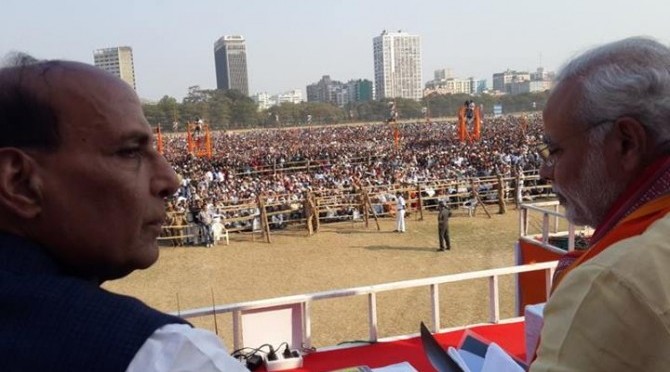 I pay my heartiest thankfulness to the State President of BJP Shri Rahul Sinha Ji, and welcome to our hope of nation BJP’s prime ministerial candidate Narendra Modi, none other than the respected Shri Narendra Modi Ji, to whom we all wish to see the next Prime Minister of India in 2014. The national general secretary and in charge of West Bengal Shri Varun Gandhi Ji, deputy in charge Shri Siddharth Nath Singh Ji, former Chief Minister of Jharkhand Shri Arjun Munda Ji, National speaker of BJP Shri Shahnawaz Hussain Ji, the well-known personality of music industry Shri Bappi Lahiri Ji, the famous and great magician not only in India but also across the globe Shri PC Sarkar Ji and my dear respected brothers and sisters.

Dear brothers and sisters, looking at yours tremendous presence I must say that we are having ‘Jan Sagar’ beside the holy ‘Ganga Sagar’. We never assumed that this kind of presence would be seen here. I know well the history of West Bengal. Its soil produced a great number of person and personalities in the history of India and blessed the world as well.  The national Anthem and the national song that every Indian sings, is written from here only. Who dares to forget Shri Chaitanya Maha Prabhu, Swami Ramkrishna Paramhansa, Swami Vivekanand who initiated to let the rest of the world’s aware about Indian culture on international platform itself. If anybody asks me that who is known as the first Global Youth of India? Then I will take the name of great personality of Swami Vivekanand Ji who was born from the holy soil of West Bengal. Who even dares to forget the names of great personalities like Maharshi Shri Aurobindo, Ravindra Nath Tagore, Bankim Chandra Chatterjee, Netaji Subhash Chandra Bose? Netaji Subhash Chandra Bose who asked the youths and raised the voice as ‘Tum Mujhe Khoon Do Main Tumhe Aazadi Dunga’, dear friends the soil of West Bengal produced this kind of freedom fighter; therefore I must pay my deepest gratitude to this soil.

It is clearly seen that CP(M) has deteriorated the economic condition of West Bengal during their 35 years of control over here. Dear brothers and sister, it is the same state which made its strong contribution in the industrial production by up to 24% before governed by CP(M); but during the tenure of CP(M) its contribution was reduced to 4% only, what a pity? Maximum numbers of great industries have been finished gradually. The well-known Jute industry which is famous across India is now on the edge of dilution. CP(M) derailed every industry but one industry increased and that is Murder Industry! Assassination, Robbery, Loot and other serious crimes has taken place replacing industrial growth here in West Bengal during the time of CP(M).

I know about Kolkata, it was known as City of Joy, but in current scenario nowadays only criminal offences are reported such as Loot, Rape, Murder, Kidnapping and others. According to the National Crime Bureau’s report West Bengal is affected seriously with high crime graph other than rest of the Indian states, and it is the serious challenge before West Bengal.

There was a time when West Bengal was contributing up to 13% in the GDP of India, which is reduced now limit to 7% only. If we talk about the Foreign Direct Investment in West Bengal in comparison to rest of the Indian states, it covers only 1%. Now how the West Bengal shall be developed? You can easily imagine the situation now. But then again, I wish to congratulate the people of West Bengal to suppress the reign of CP(M) for 35 years and granted the chance to TMC and Mamta Ji became the Chief Minister of West Bengal. I want to say to Mamta Ji that change is not being seen as quickly as the people of West Bengal wanted from you. I know well that the debt of 2 lakhs and 26 thousand crore is pending over the government of West Bengal and the state government has to remit the sum of 28 thousand crore every year. CP(M) is completely responsible for this economic deterioration of the state. To regain the economic condition of the state, Mamta Ji asked to the Congress Leader to hold the remittance for next three years only, in this regard I want to appeal the Congress led UPA government to accept the proposal of the Chief Minister of West Bengal to ensure the establishment of growth and eradication of poverty and unemployment.

It was approximately 2 crores poor population was existing during the reign of CP(M), now the reduction is seen but still not up the mark as desired. It is very slow. In current days the economic condition of West Bengal is compared to Greece and Yunaan, so I want to make UPA and Congress remind that, European Union granted the Bailout Package to the Greece and Yunaan in order to revive those countries. Therefore I want to say to the Congress Led UPA government to make the kind of Bailout Packages for West Bengal to make the state revive and that bailout packages should be granted by keeping the innocent people of West Bengal in mind to ensure their rights.

Concerning with the same issue I must say that Congress always made partiality to the non-congress governments and that led to the regional imbalance in result. But I wish to rest you assured that the whole India regardless North, South East or West will be completely developed equally, when Mr Modi will be the Prime Minister of India.

Today I have come to make a single appeal only that Congress has deteriorated the nation, increased inflation and supported corruption. I don’t want to discuss the name indulged in corruption but want to say that it is limitless. It is hard to imagine that Congress has made five and the half lakhs crore of scams and corruption so far and still counting.

I am clearly watching the large numbers of unemployed youngsters here. These guys are forced to wander here and there, even then having the great potential and ability to perform, because of no vacancies of employment. I want to rest you guys assured that yours hands will be full of work and yours wallets will be full of your self-earned currencies. You are well aware with the government of Shri Atal Bihari Bajpai, just go through with the National sample survey report. It clearly states that during the government of Shri Atal Bihari Bajpai in the tenure of 6 years, 70 lakhs new employment opportunities were generated; but on the contrary Congress led UPA government could barely raise only 27 lakhs employment opportunities since 2004.

I want to say to my farmer brothers that their condition is worst in West Bengal in comparison to other states. So for that sake, we have decided to deploy a scheme in to the favor of farmers to make sure that their income is settled down before ploughing the field. You may visit across India and may easily find that the BJP governed states are working intensively in to favor of farmers by providing them loan with the minimum interest rates of 1% and 0%, and it is being done by BJP governed states and not in other states. Being the Agriculture Minister of India in NDA government I had made the scheme and it is known as “Farm Income Insurance Scheme”.

BJP has the clear Idea for unemployed youngsters to ensure their employment by providing them debts at very minimal interest rate so that they can be self-employed as well. Before making an appeal to you people of West Bengal, I want to make an appeal to the Chief Minister of the State Mamta Ji, to give back the fields of our farmer brothers which were taken in Nandigram.  At the time of Nandigram agitation by farmers taken place I was also there in order to protest the policy under which our farmer brothers were imposed to quit their fields. I got arrested then.

I want to make one more request to all the people of West Bengal just by letting you know that here, in West Bengal few ill forces are working to break and divide West Bengal in order to retain their control over the state. Their only aim is to establish own government anyhow; But BJP does not play politics just to maintain our government only but to make and maintain our society and our nation as well.

As far as Mr. Modi is concerned for other political parties who claims Modi for riots, I want to say them that go to Gujarat now see the scenarios, development, peace and harmony then talk to us. Unfortunately the riots were taken place once in the 12 years and he always condemned it. Riots or violence should always be condemned and defamed whether in any form or at any place. At the time of Gujarat riots in 2002 Mr. Modi condemned that and said that it was such an unfortunate incident happened. And now, if we talk about the current scenario of Gujarat the Per Capita Income of the resident minority of the state is much higher than other states across India.

And My dear brothers and sisters, I am saying all these things before you because BJP is the party that believes in Human and Humanity and not in religion, sect, cult dialects or ethnicity or anything else. Jai Hind Jai Bharat.