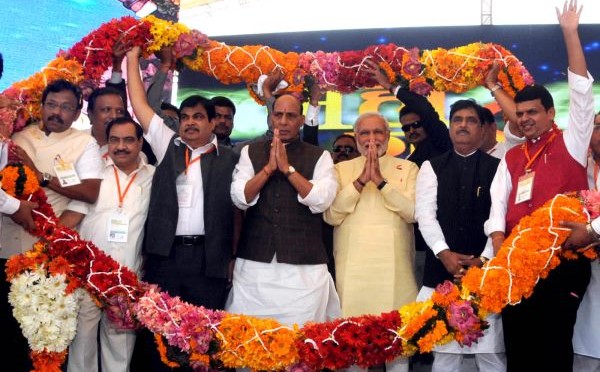 Bhartiya Janata Party National President Shri Rajnath Singh today addressed a huge rally named ‘Maha Garjana Rally” in Mumbai at the BKC ground.  Addressing the gathering with a great pride he said, Maharashtra is the land of great legends like Chhatrapati Shivaji, Bal Gangadhar Tilak, Veer Savarkar, Bhim Rao Ambedkar, who can never be forgotten. He praised late Shri Bala Saheb Thakrey and said that whenever the country was in trouble he roared like a lion.

Shri Rajnath Singh announced from the stage that the Bugle has been blown by the countrymen and what they want is a change.  He said that in the past assembly elections in five states, BJP turned out as winner in four states that are Rajasthan, Madhya Pradesh, Chhattisgarh and Delhi. BJP got the majority and it is indubitably a clear indication that what the country wants. He also said that Congress has emerged victorious in Mizoram and calls this win to be merely a consolation prize that has been offered by the citizens with an example that, when a race is organized then the participants who run but don’t do well are given that prize. Shri Rajnath Singh said that in Delhi the situation of congress is such that last time they won 43 seats but this time they were successful at only 8 seats.

Shri Singh said that congress has only been engaged in corruption and scam. Inflation rate is up and the value of rupee has gone down. Criticizing the Maharashtra Government he said that it has turned into the government of scams and corruption, whether it is Aadarsh Society Scam, Campa Cola scam or the irrigation scam.

He said that when BJP was in power and Shri Atal Bihari Vajpayee was the Prime Minister of India then he balanced and controlled the inflation. Even no one can point a finger that there were any corruption charges on any of the Minister or the Prime Minister at that time.

He takes a dig at the congress and says that the party is mocking poor. The congress says that a tea seller can’t be the Prime Minister of India. He questions that if an ice cream seller like Barak Obama can become the President of America and a news paper seller like APJ Abdul Kalam can be the President of India then why can’t Shri Narendra Modi become the Prime minister of India?

On Sonia Gandhi commented that how she can stop inflation as she don’t have any magic stick. Shri Rajnath Singh says that the magic stick was with Shri Atal Bihari Vajpayee but now he has handed it over to Shri Narendra Modi.

Shri Rajnath says that our fight is not with a particular person and we are only against corruption, Inflation, unemployment, terrorism and poverty.

Shri Singh said that congress is trying to take the credit of Lokpal Bill but in reality if someone who has to be credited is the one and only Anna Hazare.

Shri Singh concluded his speech urging the crowd to vote and support BJP and make Maharashtra and the entire country Congress free.