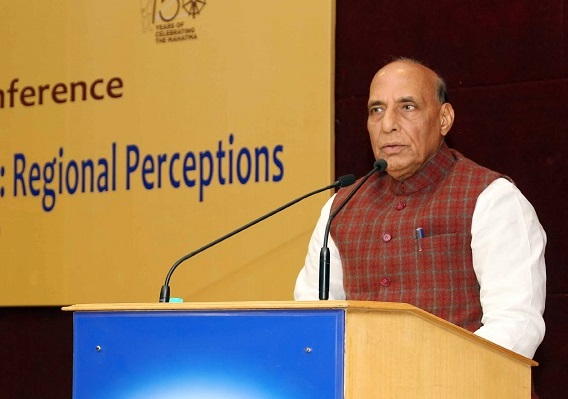 1.  As President of IDSA, I am privileged to extend a hearty welcome to all the delegates and participants from South Asia and Myanmar for the 12th South Asian Conference.

2.  India has always attached great importance to its neighbourhood. The theme of this year’s conference, “India’s ‘Neighbourhood First’ Policy: Regional Perceptions” is quite timely. India has at all times harboured the rich cultural ethos of brotherhood and वसुधैव कुटुम्बकम. Our traditional knowledge through Vedas (वेद), Upanishadhas (उपनिषेद) and Puranas (पुराण) has taught us the significance of ‘संघे शक्तिः’ meaning that unity is where strength lies and propelled us to follow the path of ‘संगच्छध्वम्, संवदध्वम्, सं वो मनांसि जानताम्’ meaning we all may walk together, speak in unison, think in common direction and our hearts may be one.

I feel immensely happy that our government under the visionary leadership of Shri Narender Modi is moving ahead with the values of ‘सबका साथ, सबका विकास, सबका विश्वास’. It is my firm belief that this principle of unity and brotherhood would bring win-win situation for all.

3.  Friends, in our second term, under Prime Minister Narendra Modi, the neighbourhood has been recognised as the most important foreign policy priority of his government. The Prime Minister chose to invite leaders of the SAARC countries in May 2014 and again leaders of the BIMSTEC countries in May 2019 to his swearing-in ceremonies, indicating his personal commitment to neighbourhood.

4.  As the largest country in the region, mindful of its asymmetric preponderance and the developmental aspirations of its neighbours, India has always made efforts to share its prosperity with its neighbourhood. India regards peace and prosperity in the neighbourshood as critical to its own growth and in its enlightened self-interest. Under the Neighbourhood First Policy, intensifying bilateral developmental partnership with countries in the region may create the necessary impulse for regional cooperation in South Asia in the long run.

5.  Friends, I have noticed that through the Concept Note of the conference all of you have been approached to evaluate and assess India’s approach. It would be very helpful to understand your perceptions and this would enable us to make our engagement a positive proposition for all countries in the region.

6.  Friends as you are well aware that today, in a rapidly changing world, our destinies are linked by both shared challenges and shared opportunities. Traditional security challenges today are accompanied by non-traditional threats. Our region faces the threats of military conflict, terrorism, piracy, climate change, natural disasters and food and energy security. Our intra-regional trade flows are among the lowest in the world. All this can change if we build cooperative structures that deepen mutual trust and enhance our traditional friendship.

8.  Friends, allow me to briefly dwell on the essential contours of our Neighbourhood First Policy (NFP). It is mutually beneficial, consultative, broad-based, inclusive and sensitive to the priorities of our neighbours. It has both developmental and security components. Regional initiatives taken by India such as our Act East Policy, SAGAR, SECURE, and Project Mausam, form the bed-rock of our cooperation and outreach in the extended neighbourhood.

9.  On the developmental front, there is an emphasis on greater connectivity, including energy, road and rail, port and waterways, space and digital connectivity, and making resources available to the neighbours to build necessary infrastructure in this regard. Linkages established through such initiatives with each of the neighbours in the region are not exclusive. They add to the network of communication, enabling connectivity and easy flow of region-wide movement of goods, services, people and ideas. India is willing to play a lead and critical role in this regard.

10. Apart from connectivity, India has also invested much in various neighbouring countries, through credit-lines, assistance programmes and waiver of loans, in areas related to agriculture, education, culture, health, human resource development, drinking water and sanitation, disaster relief and rehabilitation, capacity building, trade and investments as well as defence and security. In the development sphere, India has committed about 13.14 billion US dollars in credit-lines and about 4 billion US dollars in assistance in the neighbourhood over the last decade.

11. I wish to convey to you all that we have accorded special attention to address the issue of delivery deficit. Our projects in the region are being completed in much shorter timeframes earning the goodwill of people in different countries.

12. On the security front, India is engaged in conversations with its neighbours, with one exception, in order to develop joint approaches for regional peace and security. The true pathway to regional peace, security and prosperity lies in understanding each other’s sensitivities and in following basic policies of non-interference in each other’s internal affairs. It is important that we unite in our efforts to defeat terrorism. It is essential that terrorists and their ideological and financial networks are cut off and that they do not receive state support. With the exception of Pakistan our region has adhered to these principles.

13. We all must be mindful that it is only through cooperation that great heights can be achieved. The full potential of SAARC has not been realized due to the behavior and policies of a single country. All of you are aware how it stalled the SAARC motor vehicles agreement at the last Kathmandu session in 2015. It has preferred to use terrorism as a state policy towards India, rather than peaceful settlement of disputes through dialogue. Use of terror as an instrument of its foreign and security policy has promoted radicalism and terrorism in the region and posed critical challenges to security of all states. The Easter Bomb attacks in April 2019 were the latest instance of how dangerous such a policy has been for the region and beyond. The terror attacks in Mumbai, Pathankot, Uri and Pulwama in India are grim reminders of state-sponsored terrorism by a neighboring country. From Afghanistan to Bangladesh, and India to Sri Lanka, innocent lives have been lost to terrorism.

On our part, we have made it clear that talks and terror cannot go together and that Pakistan must take demonstrable steps against terror groups responsible for launching various attacks on India from its soil. We are fully capable of giving a firm response to cross-border terrorism, as we demonstrated in our strikes against terrorist targets in 2016 and 2019.

14. Friends, South Asia is at a critical juncture of history. A world of opportunity is beckoning to us. We should not hold regional prosperity hostage to the interests of select states who are obstructing all efforts aimed at regional cooperation. Our intra-regional trade has so far been abysmally low. We have to transcend these limitations. In regions like ours which is emotionally connected by historical memories and inerasable cultural linkages, but separated by zero-sum politics and misgivings, it requires careful articulation of ideas. As I told you earlier, even the steps to enhance connectivity within the region, which would have boosted people-to-people contact, and trade and commerce, were misconstrued as undesirable ploys to pose security threats to some countries. We need to seriously ponder over these issues and evolve ways of circumventing such hurdles. We need to identify areas where our initiatives have a greater chance of succeeding.

16. Let us think like South Asians over the next two days and not as citizens of any particular country for this conference.

17. I am eagerly looking forward to the suggestions, recommendations and actionable outcome reports that you are going to produce by weaving together perspectives from all corners of South Asia.

I wish you all success in your deliberations.