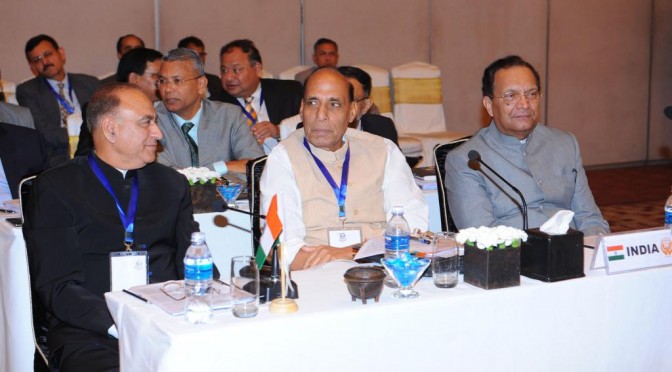 May I, at the outset, congratulate Your Excellency on your election as the Chairman of our Meeting. I would also like to thank the Government of Nepal for the traditional warmth and gracious hospitality, accorded to me personally and to my delegation.

We are meeting today in the historic capital city of Kathmandu, virtually on the eve of the Eighteenth SAARC Summit, scheduled to be held in Kathmandu on November 22-27. We cannot but recall, the momentous decisions taken at the 11 on January 4-6, 2002, when our leaders set a long term vision on how we would move ahead on the shared goal of economic prosperity for our peoples. We then agreed to finalise the text of a Free Trade Agreement by the end of the year and implement “the vision of a phased and planned process, eventually leading to a South Asian Economic Union”. This was the cherished dream of our then Prime Minister Shri Atal Bihari Vajpayee, who even spoke of establishing a South Asian Monetary Union.

With a strong and unambiguous mandate from the people of India, our present Government led by Prime Minister Narendra Modi assumed office on May 26, just over 100 days ago. Even before Prime Minister Narendra Modi assumed office, he decided that as a manifestation of our commitment to a stable, peaceful and prosperous South Asian neighbourhood, he would invite the leaders of all SAARC countries as our honoured guests, for the swearing in of the newly elected Government. The first order of business of our Prime Minister was to assure our SAARC neighbours individually and collectively of the   importance we placed in working together with them, for the welfare and well being of our peoples. The very first bilateral visits of Prime Minister Narendra Modi were to our two Himalayan neighbours, with whom we have open borders and enjoy close ties-Bhutan and Nepal. I would like to reiterate that our commitment is to giving primacy to improving our relations with all our SAARC neighbours.

• A major issue that concerns us all is terrorism, which is driven by internal, regional and international factors, within and across national boundaries. There was sea change in the strategic environment in our neighbourhood with the emergence of a new dispensation in Afghanistan following the terrorist strikes in the US of September 11, 2001. The international community has lent unprecedented support to the democratically elected Government of Afghanistan. It is our hope that this will continue. But, we need to carefully assess the impact on the entire South Asian Region of the withdrawal of foreign forces from Afghanistan, which would continue to need international assistance, to enable it to move ahead on the road to stability, peace and progress. We all share a common and indeed vital stake in peace, stability and economic development in Afghanistan. We are naturally concerned by new threats of extremism, terrorism and violence being held out to South Asian countries like India, Bangladesh and Sri Lanka, which cannot but raise concerns.

• Groups with radical and extremist ideologies do pose threatsacross national boundaries, in this volatile security environment. These groups even have no compunction in issuing threats publicly against neighbouring and regional countries. Linked to this issue, is the increasing circulation of counterfeit currency in our neighbourhood. I must particularly thank our hosts in Nepal for the cooperation they have extended to us, in dealing with the movement of counterfeit currency, across our borders. But, we do need to consider how this issue, which involves not just terrorist activities, but also economic destabilisation, can be addressed by all of us collectively. Moreover, it is imperative that all South Asian State should introduce legislation that enables stringent punishment of individuals, organizations and publications that advocate and incite terrorism and violence, across national boundaries.

• I would like to stress that our Government is committed tosecuring justice for the families of the victims of deadly terrorist strikes, like the killings during the terrorist attack on the Metropolitan City of Mumbai, in November 2008. It is also committed to implementing the SAARC Regional Convention and its Additional Protocol. India’s focus is on the need for States to adopt comprehensive enabling legislation and also for the inclusion of offences under domestic law, strengthening extradition procedures and providing courts effective jurisdiction to prosecute offenders, when extradition is not granted. Some Member States are yet to ratify the Convention on Mutual Assistance on Criminal Matters, which was signed in 2008. I would urge them to do so to enable the widest possible mutual legal assistance in criminal matters.

• I might add that we are facing serious problems arising from drug smuggling in States located on our borders, like Punjab. This menace afflicts both countries where narcotic substances are produced, and countries beyond their borders. Funds from such smuggling often finance terrorism. We need to strengthen domestic legislation and cooperate even more implement the “Regional Convention on Narcotic Drugs and Psychotropic Substances,”  while enhancing multilateral cooperation globally,as drug smuggling inevitably has global dimensions.

• This meeting is also providing us opportunities to discuss other issues of common interest like Cyber Crime, Human Trafficking and illegal movement of arms across national boundaries. I think we all acknowledge that one evil which we all need to address individually and collectively is the issue of corruption. We have promised our people a policy of “Zero Tolerance for Corruption”. India is a signatory to the 2005 “UN Convention on Corruption”. We intend to make all our laws to be in conformity with this Convention. We could discuss and agree on measures on how we can cooperate regionally in dealing with this issue.

• In fact, we can share our experiences at the administrative level. Here I would like to suggest to establish a ‘SAARC Centre for Good Governance’ where the administrative officers from all member countries could come together to exchange their experiences pertaining to development and good governance. It will not only strengthen the positive trends of development in South Asia but also help in realising our shared dream of good governance.

• During the 2002 SAARC Summit in Kathmandu we agreed on a roadmap for promoting regional economic integration for the welfare and progress of the people of South Asia. I look forward to our discussions in this historical capital city, contributing positively to making the forthcoming Summit in Kathmandu in November an event which will build a strong basis for future of amity, peace and progress for the people of the region. I can assure you that this is the cherished aim of India and its Prime Minister Mr. Narendra Modi.

Excellencies, in closing I would like to say that the annual meeting of SAARC Home Ministers provides India a timely opportunity to underscore the imperative of meaningful and substantive cooperation within the region against terrorism in particular and organized crime in general. I would reiterate the need for all SAARC States to implement relevant SAARC agreements and conventions on security related issues in letter and in spirit.

I thank you for your attention.