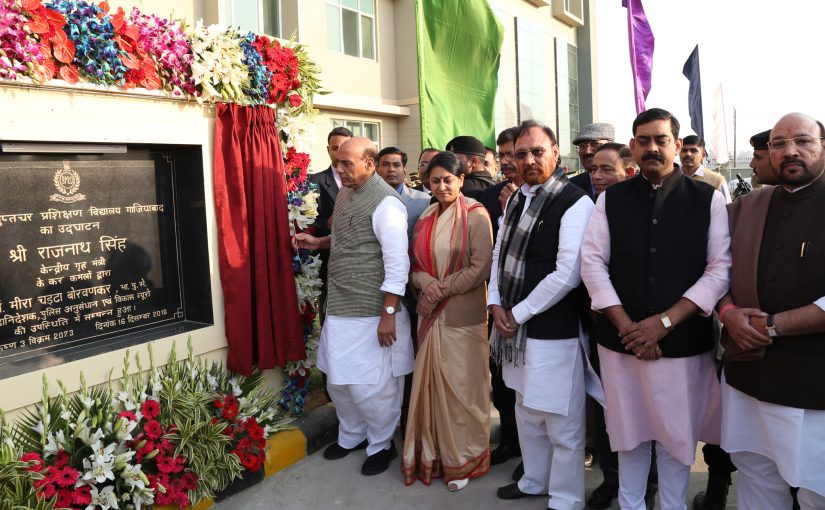 The Union Home Minister, Shri. Rajnath Singh inaugurated the new building of the Central Detective Training School (CDTS) at Ghaziabad today. In the function he congratulated the BPR&D for the well-constructed campus with state of the art training facilities.

The Union Minister stressed that training of police personnel needs a thrust in a big way and hoped that such institutions will help to augment the training capacity and quality. He said that police need to stress more on investigation of cyber-crime, cellular and computer forensics, and investigation of crimes against women. He referred to the Prime Minister Shri Narendra Modi’s directions to digitize most of the police training content and to adopt distant and e-learning systems in order to train the large number of police personnel being recruited every year. He expressed his concern at the lack of pre-promotional and post-promotional courses for police personnel. With promotions, the duties and responsibilities change and it is imperative that they be re-trained accordingly.

The Union Home Minister emphasized that in a democratic set up, the police need to deal with public in a more sensitive and rational way. He stressed that police personnel need to be equipped with appropriate soft skills, communication and negotiation skills in order to deal with public expressing the difference of opinion or their demands in a democratic set-up. These trainings, he stressed, need to be taken up in a big way so that police can discharge more effectively and efficiently while dealing with public. This would also help in the day-to-day dealing with public and improve the image of police.

The Union Home Minister said there is the need to reward police personnel appropriately so as to keep their morale high. Towards this, he expressed satisfaction that the trophies and medals for excellence in police training that he had declared and instituted in September 2014 at Jaipur while addressing the 34th National Training Symposium organized by BPR&D has been implemented. He congratulated the 06 police training institutions who won the national award and the 153 best police trainers for the year 2014-15. On the occasion he gave away the trophies to the heads of these police training institutions and 07 best police trainers who were working in the NCR.

Dr. Meeran C Borwankar, DG BPR&D, in her welcome address informed that there is an acute shortage of police training courses and they need to be increased so that every policeman can be re-trained at regular intervals rather than the long time of 16 years at present.

The trophies have been instituted at the national level for CAPFs and States/ UTs in three categories, viz. Gazetted Officers (GOs), Non-Gazetted Officers (NGOs) and Other Ranks (ORs). The award for the National level winners includes a trophy and Rs. 20 lakh for infrastructure development of the training institute. The Director/ Principal/ In-charge of the winner training institutes (with the maximum working tenure during the year of assessment) is conferred the Union Home Minister’s Commendation Disc for excellence in training.

Union Home Minister’s Medals for excellence in police training have been instituted to recognize the services of police personnel dedicated in training in various Police Training Institutes in the country. These medals are distributed among different States/ UTs/ CAPFs/ CPOs in proportion to the sanctioned strength of the police in that State/ UT/ CAPF/ CPO. For the year 2014-15, names of 153 police trainers conferred this medal by Union Home Minister has been announced.

The CDTS Ghaziabad was established in June 2016. It is a training school under the aegis of the Bureau of Police Research and Development, Ministry of Home Affairs. It has a mandate to provide in-service training to police investigation officers in the ranks of Sub-inspector to Dy.SP, by imparting latest knowledge of scientific techniques and best practices in investigation. The police officers from the States of MP, UP, Delhi, Bihar, Uttarakhand, Jharkhand, Chhattisgarh and various others Central Police Organizations are trained at CDTS Ghaziabad.

The new building of the Central Detective Training School Ghaziabad has been completed at a total of Rs. 65.14 Crores. The work commenced in December 2013 and the construction was completed in 30 months (June 2016). The CDTS is built on 8.37 acres and consists of one Administrative Block, Training Block, Hostel Building, Guest House, Hostel for Women, an Auditorium, Badminton Court, Gymnasium and residential quarters. The National Building Construction Corporation [NBCC] was has constructed this state of the art training institute.