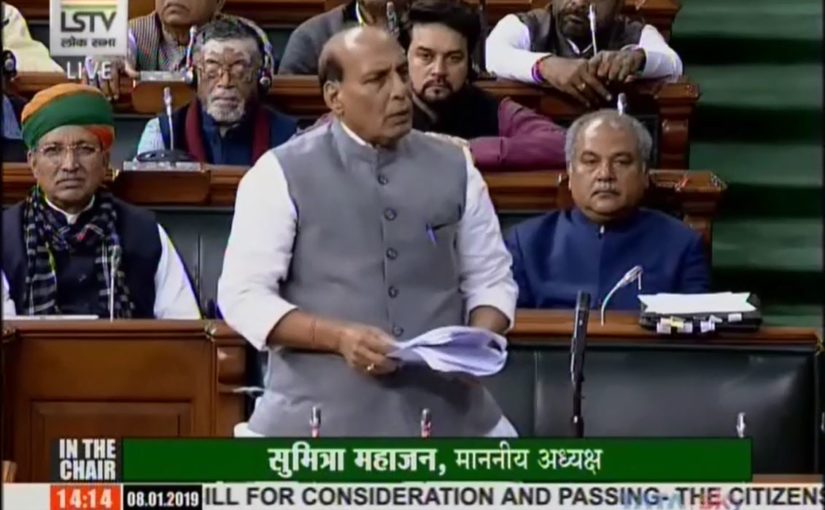 “The Act will not be confined to Assam, migrants can reside in any State; burden of these persecuted migrants will be shared by the whole country”: Shri Rajnath Singh

Bill to grant ST status to six communities of Assam will be tabled in Parliament: HM

Moving the Bill, the Union Home Minister clarified that the Act is not confined to the State of Assam. The Bill will apply to all States and Union Territories of the country. The beneficiaries of Citizenship Amendment Bill can reside in any state of the country. The burden of these persecuted migrants will be shared by the whole country. Assam alone would not have to bear the entire burden and Government of India is committed to give all help to the State Government and people of Assam, said Shri Rajnath Singh.

Dispelling the misgivings about Citizenship Amendment Act, Shri Rajnath Singh highlighted the discrimination and religious persecution faced by these communities in these countries. They have no place to go to, except India, he said. The Act will provide relief to persecuted migrants who have come through western borders of the country to States like Gujarat, Rajasthan, Delhi, Madhya Pradesh and other States, he added.

Migrants from these communities were earlier given protection against legal action in years 2015 & 2016. Long term visa provision was made for them.

The proposed amendment will make these persecuted migrants eligible to apply for citizenship. Citizenship will be given to them only after due scrutiny and recommendation of district authorities and the State Government. The minimum residency period for citizenship is being reduced from existing 12 years under the present law to 7 years.

The Union Home Minister said the present Government has taken several measures to implement the Assam Accord. An important pillar of Assam Accord is Clause 6 dealing with constitutional, legislative and administrative safeguards for protection of cultural, social and linguistic identity and heritage of Assamese people, said Shri Rajnath Singh. MHA has notified on 5thJan., 2019 a High Level Committee consisting of eminent and knowledgeable persons from Assamese society with a very wide mandate to suggest such safeguards for protection of the Assamese identity, including reservation in the State Assembly and in jobs. The Committee will submit its report within six months, he added.

Government has given approval to move the Bill in parliament granting ST status to six communities of Assam namely Tai Ahom, Koch Rajbongshi, Chutia, Tea Tribes, Moran and Matak. Government has waived the requirement of Cabinet approval. A Bill is being introduced in the current session of Parliament.

At the same time, Shri Rajnath Singh said, full safeguards will be provided to protect the interests, rights & privileges of existing Scheduled Tribes of Assam. A separate Bill will be brought to grant ST status to Bodo Kacharis in Hill districts of Assam and Karbis in the rest of Assam, he said. Sixth Schedule of the Constitution is also proposed to be amended to strengthen the Autonomous District Councils, he added.