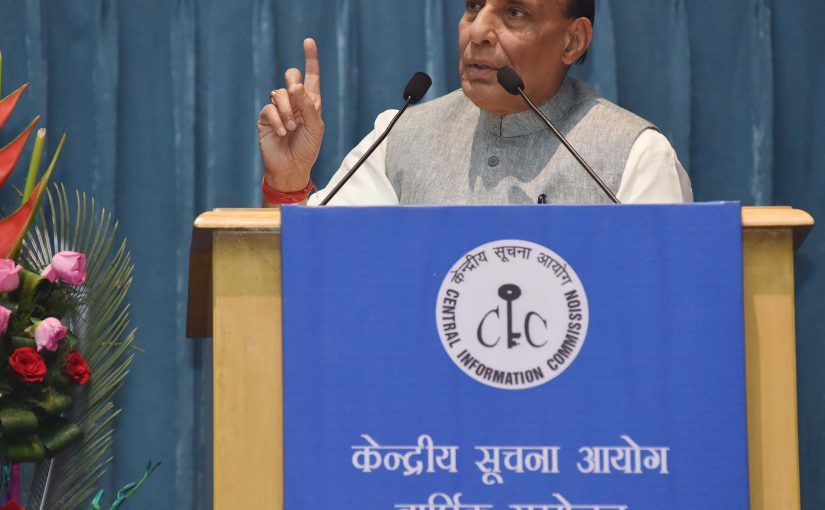 While delivering the inaugural address, Shri Rajnath Singh said that Right to Information (RTI) Act is a powerful medium of two-way communication between the citizens and the Government. On the one hand, the citizens get information through this act and on the other hand, the Government gets new ideas for formulating people-friendly policy and to reform the governance system, when people ask such information. The Government system should use it effectively, he added. He also said that our system needs to be corruption-free, smart, sensitive, transparent and answerable for making all the programmes of the Government a success and RTI can play an important role in it. RTI Act provides a strong foundation to the feeling of trust and cooperation which is important for the governance based upon trust.

Shri Rajnath Singh said that programmes like ‘My Gov.in’ website provide a platform for two-way communication between the Government and the citizens. This benefits both – the citizens and the Government, he added. He also said that the ‘Top-down’ approach is now getting converted into ‘Bottom-up’ approach. The Home Minister said that now maximum possible information is being made available on the websites of Government departments and agencies. This transformation has gained momentum after the advent of RTI Act. He also recalled that the Prime Minister had said last year that the dream of ‘Digital India’ is closely linked with the transparent government. This means that the maximum information the Government makes available online, the transparency of the Government increases to that extent. The Union Home Minister also emphasised on the need of an ‘Integrated Response System’, where every citizen has a Single Window to reach the Government for fulfilment of his needs.

Shri Rajnath Singh also expressed happiness over the launch of Citizen-friendly software by CIC, where the citizens can register their appeals and complaints. The citizens can know the status of the cases and can also have information of the date of appeal through Email and SMS. He also said that CIC also uses video-conferencing to hear the cases and last year about 11,000 hearings have been done through video-conferencing. This is a good facility for people living in the far-flung areas. He said that e-Court system introduced by Commission today will help reducing the pendency of cases.

Speaking on the occasion, the Union Minister of State (Independent Charge) for Development of North Eastern Region (DoNER), MoS PMO, Personnel, Public Grievances, Pensions, Atomic Energy and Space, Dr Jitendra Singh said that the instinct for information existed since the birth of the mankind. Over the centuries, as the civilisation evolved, the quest for information became more institutionalised and with now the right to information has taken the shape of a law. He said that the government is virtually already in public domain. He said that e.g. in case of Department of Personnel and Training (DoPT), every decision taken by the ACC is uploaded on the real time basis. He also said that the department has recently launched a Mobile App – Employees Online (EO) for this purpose, which aims at Government being more transparent and citizen-centric.

Delivering his welcome address, the Chief Information Commissioner (CIC) Shri R. K. Mahtur said that this annual convention aims at taking stock of the successes and shortcomings of the previous year. He said that during the two- day conference, various sessions have been planned on RTI implementation in different sectors. He also said that during the previous annual convention, the Prime Minister had said that the RTI queries received by the ministries should be analysed. It will help us knowing where we lack in transparency and policy etc. Shri Mathur also informed that the CIC has digitised about 1.5 lakh files. He also emphasised that RTI should be strengthened in some areas such as women and underprivileged.

On the above occasion, the Union Home Minister launched ‘e-Court Software’. The e-Court system aims at enabling speedy disposal of Appeals/Complaints by using digital technology. The system will allow online filing of appeals/complaints and case disposals using latest technology. The system will generate a unique number which can be used by the applicant for tracking the status of a case filed with the Commission. As soon as a case is filed online or offline, the system will generate SMS/email alert to the applicant. Alerts will also be generated to inform the applicant at the stage of Registration, issue of Facilitation Memo, scheduling of the case hearing and also at the stage of decision uploading. The system will offer an online search facility which allows a user to search for Dak, File, Hearing Notice and Decision etc.

The Home Minister also released a book on RTI success stories. The book has been prepared for the Commission by Yashwantrao Chavan Academy of Development Administration.

During the two days of the conference, various sessions are being organised on topics such as RTI in Railways, RTI Web portal by DoPT, RTI in Public Sector Undertakings, RTI in Banking/Insurance, Academic papers on RTI and RTI in States. These sessions are being attended by eminent panelists and experts in these areas.