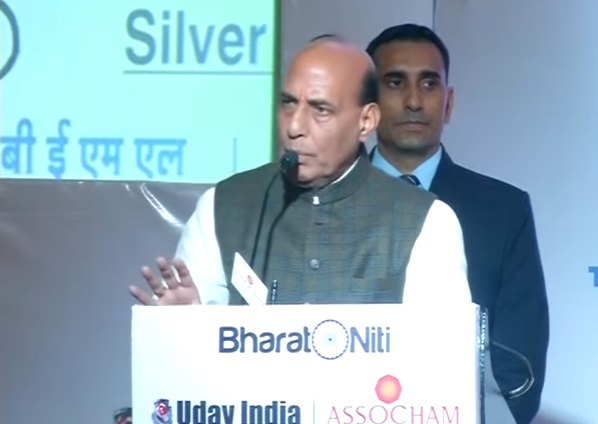 Government is working towards reducing dependencies on other countries in defence sector: Shri Rajnath Singh

HM Shri Rajnath Singh said “self reliance” was a must towards ensuring “foolproof” internal security of a country while underlining the need to reduce dependency on other countries, especially in the defence sector.

“We should consider giving more incentives in manufacturing in defence sector,” Shri Rajnath Singh said during a conference on ‘Defence Production’ organised by trade body ASSOCHAM in New Delhi.

Mr Singh said defence production has not been encouraged in the past, “although previous governments may have tried”. This triggered corruption instead of increasing competitiveness in defence orders, he said.

“As far as the question of purchasing defence equipments is concerned, I can say that decisions to purchase defence equipments are now being taken fast as compared to past and their implementation is also ensured. If we can make ‘Mangalyaan’ in a fraction of cost, then why should we depend on import on other nations,” Shri Singh said.

He said that India was emerging as a global hub in Research and Development as well, especially in manufacturing and engineering R&D through ‘Make in India’ initiative.

“Even in defence sector, indigenous defence production has been encouraged through ‘Make in India’ and the government wants to take it forward,” Shri Singh said.

“Securing internal and external security of a country cannot be imagined unless it becomes self-reliant. Even if a country is not fully self-reliant, it will have to make sure that its dependence on other nations should be less,” the minister said.