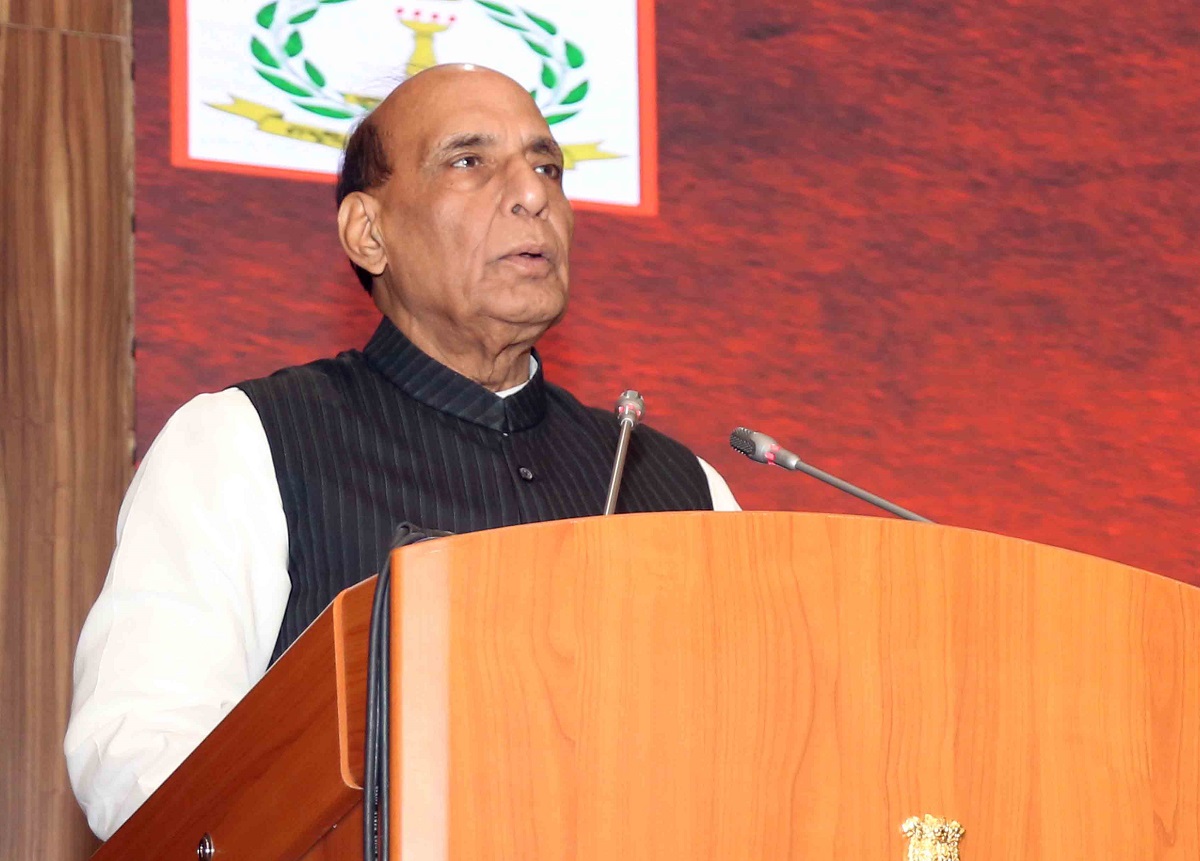 It gives me immense pleasure to be here at NDC, the highest seat of strategic learning in our Country. Over the years, NDC has grown – both in terms of its national and international stature, as also, in the depth and scope of its curriculum – to occupy a position of prominence and influence among the global strategic community.

I congratulate all the officers who are being awarded the Master of Philosophy degree today. It is said that “Theory without practice is pointless, practice without theory is mindless.” I am sure that this academic exposure would have given a sound theoretical underpinning to your practical perspective. This course is unique in the sense that it brings together selected senior officers from various organisations of the Government, and friendly foreign countries. The objective is to prepare them for higher responsibilities, in the management of national security and other related areas of public policy.

I am certain that this Course would have enhanced your insight into the strategic challenges and opportunities that our nations are facing today. This would have also equipped you for greater responsibilities of strategic leadership and policy formulation.

Friends, the concept of security has been associated with the history of human civilization from the very beginning. You all would be familiar with the concept of the ‘state of nature’ by Thomas Hobbes, one of the major pioneers of modern political philosophy. In his work, he propounded that without the state, or rather, without governance, which ensures security of life and property, human life cannot be an ideal life. Here by “state”, he means the “guarantor of security”. Thomas Hobbes has mentioned in his famous work Leviathan, that “Where there is no common power, there is no law,….No arts; no letters; no society; and which is worst of all, continual fear, and danger of violent death: and the life of man, solitary, poor, nasty, brutish and short.” As per Hobbes, where there is no security, there can be no art, literature, prosperity and culture. And where there is no culture, there is no respect for each other, and therefore no value of life.

In such a situation the existence of the state becomes necessary for a society having an ideal life. Security is the most primal function of the state. Whatever may be the political system – be it monarchy, feudalism, imperialism or a democratic system, the responsibility of security has remained with the state.

The full potential of society’s development can be realised only when its security is ensured. That is why I believe, that the narrative of dichotomy between security and development, as stated by a few commentators, is false. Security is sine–qua-non (सिने-क्वा-नॉन) for civilisation to flourish and prosper.

Take terrorism for example. Generally, it falls in the area of ​​internal security. But at times it comes to light that training, funding and arms support of such organizations is being done from outside the country. Incidents of cross-border infiltration and cross-border terrorism are seen, which are classified in the category of external security.

I am told that in December 2015, the world witnessed the first known power outage caused by a malicious cyber-attack. Three utility companies in Ukraine were hit by Black Energy malware, leaving hundreds of thousands of homes without electricity for six hours.

The energy sector is one of the main targets of cyber-attacks against critical infrastructure, but it is not the only one. Transport, public sector services, telecommunications and critical manufacturing industries are also vulnerable.

Our increasingly interconnected financial systems are also at a great risk. You all must be aware that in February 2016, hackers targeted the central bank of Bangladesh and tried to steal 1 billion dollars. While most transactions were blocked, 101 million dollars still disappeared. This was a wake-up call for the finance world that cyber risks in the financial system had been severely underestimated. Today, the assessment that a major cyber-attack poses a threat to financial stability is not a question of if, but when.

Likewise, information war has the potential to threaten our political stability. There is no account of how much fake news and hate material is likely to be brought in the society through social media platforms. The organised use of social media and other online content generation platforms is being used for engineering the opinion or perspective of the masses. The deployment of information war was most evident in the on-going conflict between Russia and Ukraine. Throughout the conflict, social media has served as a battleground for both sides to spread competing narratives about the war and portray the conflict in their own terms. The propaganda campaigns as a means of strategy to shape narratives are by no means new during warfare, but its reach has increased by leaps and bounds due to the shift toward social media as the primary distribution channel.

Another case in point is the role of Cambridge Analytica in the US presidential elections of 2016 which revealed how the social media platforms created to connect us, have been weaponised to influence free and fair elections around the world. India, with millions of WhatsApp and Facebook users, and on various other social media platforms, has a big reason to be cautious.

Now, the real question is, if there are so grave security challenges evolving before us, how we counter them. The answer, according to me, lies in working towards shared and collective responsibility of the comity of civilised nations. Martin Luther King Junior, once said that “Injustice anywhere is a threat to justice everywhere”. In this era of high connectivity and interdependence, this statement holds more relevance than ever. When peace and security of any region is threatened, the entire world feels its impact in multiple ways. The recent Ukrainian conflict showed how its ripple effects could adversely impact the whole world. Together, Russia and Ukraine export nearly a third of the world’s wheat and barley, but this conflict had prevented grain from leaving the “breadbasket of the world” and led to food crisis in various African and Asian countries. This conflict has also fuelled an energy crisis in the world. In Europe, oil and gas supply has been dwindling. India has also been affected as the Russia-Ukraine war led to a disruption in international energy supply, making the energy import much more expensive.

If security becomes a truly collective enterprise, then we can think of creating a global order which is beneficial to all of us. The global community has been working towards it and there exist a lot of multilateral organisations, working in the field of security like United Nations Security Council. What we now require is to elevate it to a level of shared interests and shared security for all.

Some may argue that it is a utopian dream. To this, I would say that we have recently achieved it in a particular case of covid -19. The recent global response to the Covid pandemic highlighted the urgent requirement of multinational collaboration in information sharing, situational analysis, as also research, development and production of the vaccine. This was an important lesson for the world. It highlighted the need for greater understanding, connect and cooperative initiatives between institutes and organisations within and across nations, in handling issues of national and international security. The pandemic also gave a chance to us as a country to put into practice our deeply held belief of ‘Vasudev Kutumbakam’, when we initiated landmark initiatives such as Operation Samudra Setu and Vaccine Maitri. The impact of these initiatives has been very much visible in our bilateral relations with countries in the neighbourhood and beyond.

Recently, we have also been espousing the idea of multi-alignment. We believe in a multi-aligned policy which is realized through diverse engagements with multiple stakeholders, so that views and concerns of all can be discussed and addressed for a prosperous future of all. This is the only way that can lead to shared responsibility and prosperity.

I would like to share another related issue in this security paradigm, that is, not to consider national security as a zero-sum game. We should strive to create a win-win situation for all. We should not be guided by narrow self-interest which is not beneficial in the long-run, but by enlightened self-interest which is sustainable and resilient to shocks. Strong and prosperous India would not be built at the cost of others, rather, India is here to help other nations realise their full potential.

In a similar vein, I would like to tell you that conduct of our strategic policy should be moral. India does not believe in a world order where few are considered superior to others. India’s actions are guided by the very essence of human equality and dignity, which is a part of our ancient ethos and its strong moral foundations, give us our political strength. Even our freedom struggle was based on the bedrock of high moral values. I would like to quote Mahatma Gandhi where he said that “If I want freedom for my country, believe me, if I can possibly help it, I do not want that freedom in order that I, belonging to a nation which counts on-fifth of the human race, may exploit any other race upon earth, or any single individual. If I want that freedom for my country, I would not be deserving of that freedom if I did not cherish and treasure the equal right of every other race, weak or strong, to the same freedom.” Thus, realpolitik cannot be the fig leaf for being immoral or amoral. Rather, enlightened self-interest of nations can be promoted within the framework of strategic morality, which is predicated on the understanding and respect for the legitimate strategic imperative of all the civilised nations.

Friends, it is for this reason that when we partner any nation, it is on the basis of sovereign equality and mutual respect. Forging relations comes naturally to India, as we work towards mutual economic development.

I am really appreciative of the manner in which NDC has served as an instrument of military diplomacy for the country over the years, by not only including participants from over seventy friendly foreign countries, but also by signing MoUs with equivalent institutes of two of our close neighbours, in order to enhance our collaborative security understanding.

Finally, I once again congratulate all the officers of the 60th NDC Course who have been awarded the M.Phil degree this morning. I would also like to specially congratulate the officers from foreign countries of this NDC course. You are akin to the ambassadors of your respective countries. You are the bridge between India and your country and challenges and concerns shared during this course would pave the way for enhancing the global security and prosperity in region. I wish all of you, great success in your future endeavours and am confident that you will earn great laurels for yourself and your countries. And in doing so you will make both this country and the NDC proud.

I, once again thank the Commandant Lt Gen MK Mago, for inviting me for the convocation ceremony. May the National Defence College grow in strength and stature in the years to come and continue its service to the Nation.