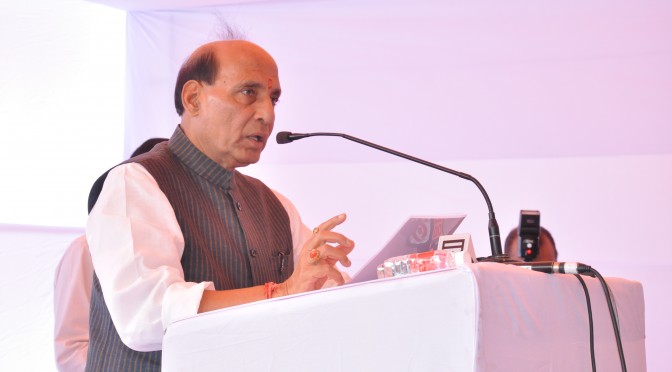 Union Home Minister Shri Rajnath Singh had a meeting with the visiting Russian delegation headed by Mr. Vladimir Kolokoltsev, Minister of Interior of Russian Federation. The Russian Minister was accompanied by Mr. Denis Alipov, Charge d’Affairs, Embassy of Russia and Mr. Peter Popov, Deputy Head of the Legal Department of the Ministry of Interior. Shri Kiren Rijiju, Union Minister of State for Home, Secretary (Internal Security) Shri Ashok Prasad and other senior officers of Ministry of Home Affairs participated in the meeting.

While recollecting India’s close and friendly ties with Russia, Union Home Minister noted that the friendly ties have been consolidated and strengthened and India continues to view Russia as privileged strategic partner. Shri Rajnath Singh stated that India is looking to expand the extensive bilateral cooperation and partnership under the framework provided by the Druzba-Dosti Joint Declaration issued during the Annual Summit between Prime Minister of India and President of Russia held in 2014.

Union Home Minister mentioned the cooperation existing between the two countries in diverse areas ranging from economic and commercial cooperation, defence, culture, health, public administration, science & technology and education. The discussion covered a wide range of issues including law enforcement activity in Russia and India, areas for joint cooperation, counter-terrorism, measures against extremism, acts of crime in the sphere of high technologies and IT, cyber security, cooperation in the field of drug control and the existing agreements between India and Russia.

On the issue of terrorism, Shri Rajnath Singh said that terrorism is continuing to pose a serious threat to the international community at large. This disturbs peace, democracy and freedom and endangers the very foundation of democratic societies. India strongly condemns terrorism in all its forms and manifestation and has adopted a holistic approach that ensures ‘zero tolerance’ towards terrorism.

Union Home Minister said that the threat of Islamic State of Iraq and the Levant (ISIL) is a matter of serious concern and there is need for close cooperation and exchange of information between the two countries and monitoring the activity of ISIL particularly in the field of media to counter the extensive media propaganda by the ISIL and the Cyber Space to combat close Jihadi chat and online recruitment.

Both sides discussed the six existing agreements between India and Russia in the field of Security Cooperation and Disaster Management. Union Home Minister mentioned that the oldest agreement signed in 1993 on cooperation and interaction between Ministry of Security of Russia and Ministry of Home Affairs of India is being revised and a fresh agreement is being formulated for consideration of Russia.

The two sides also agreed to set up an Expert Group on Cyber Security and counter-terrorism. There will be sharing of experiences in the field of specialised training and exchange of experts.

The two countries also agreed for promotion of tourism. The Union Home Minister mentioned that e-Tourist Visa facility has been extended to Russia in November, 2014 and requested for the similar facility on the basis of reciprocity. The visiting Interior Minister of Russia assured for the same and mentioned that the two countries will work in close coordination in this field.