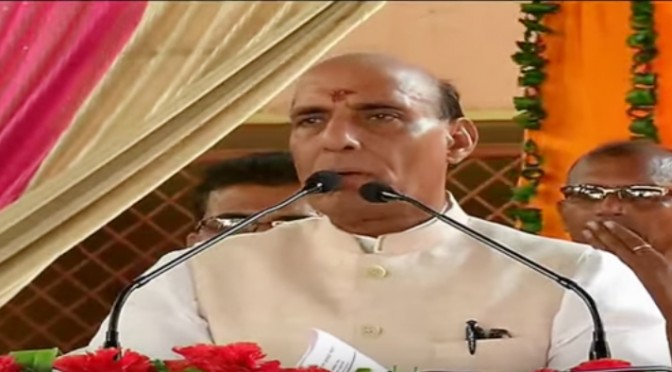 Union Home Minister Shri Rajnath Singh released a graphic booklet here today depicting the valour and sacrifice of the CRPF personnel during the epic battle of Sardar Post, Rann of Kutch in the 1965 lndo-Pak War.

Speaking on the occasion, Shri Rajnath Singh lauded the role of Central Reserve Police Force (CRPF) at Hot Springs in Ladakh and at other places in maintaining the safety and security of the country. He also appreciated the courage and sacrifice made by CRPF personnel at different places. Shri Rajnath Singh said that due to the brave efforts of the CRPF personnel there has been a 35% reduction in incidents in the Left Wing Extremism (LWE) affected States.

On 9th April, 1965, at the Sardar Post in the Rann of Kutch, two companies of CRPF stood their ground and repulsed the attack of a full-fledged Pakistani Infantry Brigade inflicting heavy casualties. The retaliation by the CRPF men was such a profound shock to the Pakistani Army that they left behind 34 dead bodies including 02 officers. Four Pakistani soldiers were taken as prisoners. Six CRPF men made supreme sacrifice for the cause of the nation.

CRPF plans to publish a series of graphic booklets depicting various tales of valour and sacrifice of the Force. The aim is to instill patriotism and nationalism in the young generation and also to let the people know about the gallantry and sacrifice of the unsung heroes of CRPF. The force also plans to raise funds through marketing of these booklets, which will be spent on the welfare of the families of martyrs.