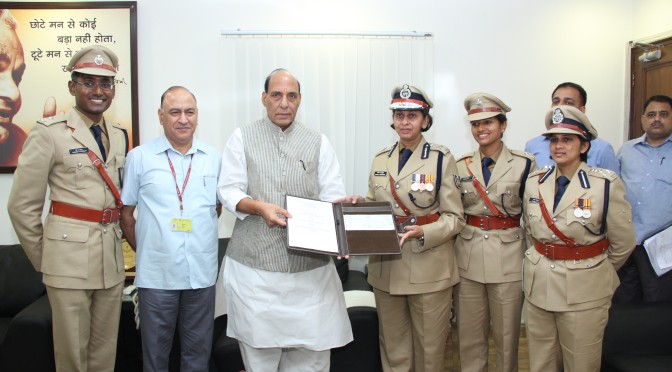 Smt. Aruna Bahuguna, Director, Sardar Vallabhbhai Patel National Police Academy, Hyderabad, presented a cheque of Rs. 3,46,968/- (Three Lakh, forty six thousand, nine hundred and sixty eight only) to the Union Home Minister as a gesture of support to the victims of the recent floods in the state of Jammu and Kashmir.

The contribution to the Prime Minister’s National Relief Fund (PMNRF) by the faculty, IPS officer trainees of 66 RR batch and staff members of the Academy was presented to the Union Home Minister, Shri Rajnath Singh by Smt. Aruna Bahuguna and some of the trainee officers of the Academy at New Delhi on September 29, 2014.

Shri Rajnath Singh appreciated the gesture of the staff and officers the Academy who contributed their one day salary to the PMNRF.