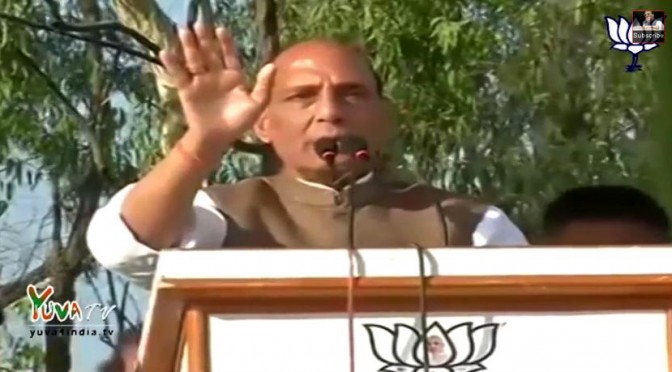 Union Home Minister makes a Suo-moto Statement on operations being conducted by the State Police and the Central Armed Police Forces in the LWE affected states 03-December, 2014 .

Following is the text of the suo-moto statement made by the Union Home Minister, Shri Rajnath Singh in the both the houses of Parliament on December 03, 2014 on the operations being conducted by the State Police and the Central Armed Police Forces in the Left Wing Extremism affected States:

“The State Police and the Central Armed Police Forces have been conducting operations in the LWE affected states to effectively tackle the problem of Left Wing Extremism. On the basis of intelligence inputs about the movement of CPI(Maoist) cadres, CRPF launched a multi phased massive operation on 16.11.2014 in the Chintagufa area of Sukma District, Chhattisgarh.

2. In this operation, 2253 CRPF personnel and 224 State police personnel (a total of 2477 security forces personnel) participated. During the first and second phase of this operation on 17.11.2014 and 21.11.2014, there had been several encounters between security forces and Maoists. On the basis of information received from various sources which include intelligence and media sources, there have been reports of killings of 12 Maoists on 21.11.2014. However, this is yet to be confirmed. During this multi phase operation, a few security forces personnel were injured who had been treated.

3. The third phase of this operation was started on 27.11.2014. After combing operations in this densely forested area, when the troops of 223 Bn and 206 CoBRA Bn were returning to their camps, they were ambushed by Maoists near village Kasalpar. This incident occurred at 10.30 AM on 01.12.2014. The troops retaliated and responded to the Maoists` attack bravely. This encounter lasted for around 3 hours. In this encounter, 14 CRPF personnel of 223 Bn. have been martyred and 14 others were injured. As soon as this encounter started, other parties of CRPF which were present nearby rushed for reinforcement.

4. The injured security forces personnel were brought to the base camp at Chintagufa and they were then sent to Jagdalpur and Raipur for further treatment. In this incident, the Maoists managed to take away the weapons and ammunitions of the deceased jawans.

5. On 2.12.2014, the martyred and injured security forces personnel were brought to Jagdalpur and Raipur by two MI -17 helicopters.

6. The details of martyred security forces personnel are given below:

7. On receipt of information about the incident, I along with senior officials reached Raipur on yesterday morning. DG, CRPF and other senior officers are camping in the area.

8. I would like to reiterate that the Central Government is committed firmly to tackle the Left Wing Extremism. For this purpose, the Central Government is implementing a multi –pronged strategy. This includes implementation of security related measures, development related measures and ensuring rights and entitlements of tribals and other weaker sections of the society. As a result of the implementation of this strategy, the morale of the Maoists has weakened. The number of surrenders of Maoists cadres has increased substantially in the current year. The LWE violence has also been declining since 2011 and this trend continues in the current year also. It is our firm commitment to provide every possible assistance to the security forces and we will continue the operations till this problem is fully eradicated. I would also like to clarify that whenever state Governments ask for CAPFs for maintaining peace, tackling extremism, natural calamities, MHA normally makes forces available after due consideration. CAPFs, always act as per the directions of the State Governments, maintaining coordination. We are also taking all possible measures to increase the capability of the State Governments.

9. I offer my condolences to the security forces personnel who laid down their lives in this incident and express my deep sympathy to the aggrieved family members.”