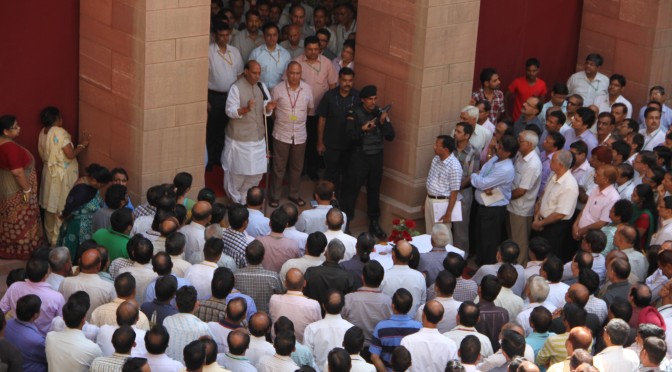 The Home Minister said that the President, Shri Pranab Mukherjee, in his address to the Parliament in June 2014 had also called for ensuring hygiene, waste management and sanitation across the nation by launching the ‘Swachh Bharat Campaign’. This campaign will be our tribute to Mahatma Gandhi on his 150th birth anniversary to be celebrated in the year 2019, Shri Rajnath Singh added.

Shri Rajnath Singh said that every citizen of this country desires to live in a clean environment with healthy surroundings. The Home Minister said that the Prime Minister, Shri Narendra Modi, has given a call for a mass movement to make this possible for which a nation-wide campaign is being organized. He further added that this government is committed to ensure that the dream of Mahatma Gandhi comes true.

Shri Rajnath Singh said that the ‘Swachhta Shapath’, (the oath for cleanliness) for creating a clean India will be taken on October 2, 2014, the birth anniversary of Mahatma Gandhi, with the target of achieving the objective of the Swachh Bharat Campaign by 2019, on the 150th birth anniversary of the father of the nation.

The Home Minister inspected an upgraded office room for the staff in the North Block and expressed his satisfaction at the facilities and the working environment for the staff. He also visited some other rooms of the staff and directed the Ministry to upgrade all the rooms to bring them at par with the upgraded room.

The Ministry of Home Affairs has initiated several steps for the cleanliness of its offices and surroundings at North Block, NDCC-II Building and at other places.