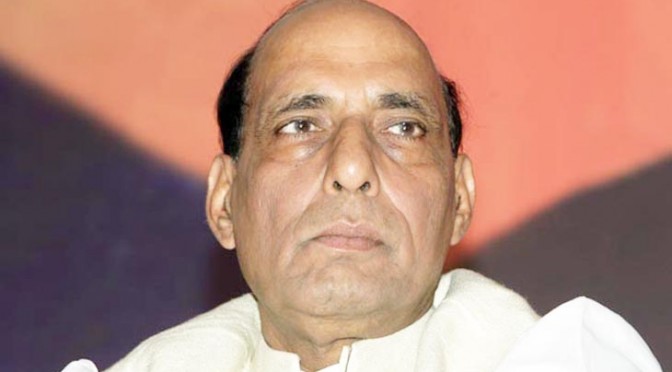 Security of Minorities is a challenge before the Government: Rajnath Singh

Inaugurating the 10th Annual Conference of State Minorities Commissions here today, the Union Home Minister, Shri Rajnath Singh has said that the Government is committed to give facilities to the minorities and to take up developmental projects for their welfare in the country. He said that the patriotism of the minorities cannot be questioned and there is no reason for any religion to prove its supremacy over the other religions. He also raised the issue of conversion and the need for an anti-conversion law in the country.

Shri Rajnath Singh appealed to the people to express themselves freely and openly without any fear from anyone. He also appealed to all the State Governments to take immediate action on the incidents of recent attacks on some churches and punish the culprits. He said that the State Governments should ensure that such incidents do not occur again anywhere against any religion in the country.

Shri Rajnath Singh said that India is the only country having all main religions of the world in one country. He said that this is due to the ancient values of Indian tradition and mythology. All religions survive here with full respectability to each other. India is the only country having 72 sects of Islam in one country which is not in any other one country in the world. Even one of the oldest churches of the world is in the state of Kerala, he mentioned.

The Home Minister raised following questions in his speech as there is a need for national debate on these issues:

• Can social service not be performed without resorting to conversion?

• Can no religion prosper without encouraging conversion?

• Will any country allow changes in its demographic character?

• Is it not true that the minorities demand anti-conversion law all over the world but not in India?

Minority Affairs Minister, Dr Najma A Heptulla, delivering the Presidential Address at the Conference, assured that the Government is committed to address the issue of backwardness, both economic and educational causes, among the minorities. Earlier the Minister of State in the Prime Minister’s Office Dr. Jitendra Singh said there is a need to change the mindset so as to remove the cause of distrust and fear among different communities. Stating that secularism was too serious an issue to be left to the government alone, he said the civil society must take the initiative to build trust. Minister of State for Minorities Affairs, Shri Mukhtar Abbas Naqvi said the Prime Minister Shri Narendra Modi is committed to the welfare of all minorities. He said that the security, prosperity and education of minorities are important issues before the Government. Shri Naqvi assured that there would be proper utilization of funds earmarked for minorities’ welfare and that any pilferage would be plugged. Speaking on the occasion, Chairman of the National Minorities Commission, Shri Naseem Ahmed, said it is the Commissions’ endeavour to protect the constitutional, legal and civil rights of the notified minorities.