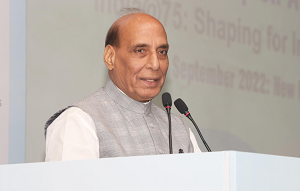 Raksha Mantri Shri Rajnath Singh held a telephonic conversation with the Defence Minister of Russian Federation Mr Sergei Shoigu on October 26, 2022 at the latter’s request. During the telecon, both Ministers discussed bilateral defence cooperation as well as the deteriorating situation in Ukraine. Defence Minister Shoigu briefed the Raksha Mantri on the evolving situation in Ukraine, including his concerns about possible provocations through use of ‘dirty bomb’.

Shri Rajnath Singh reiterated India’s position on the need to pursue the path of dialogue and diplomacy for an early resolution of the conflict. He pointed out that the nuclear option should not be resorted to by any side as the prospect of the usage of nuclear or radiological weapons goes against the basic tenets of humanity.

Both Ministers agreed to remain in touch.