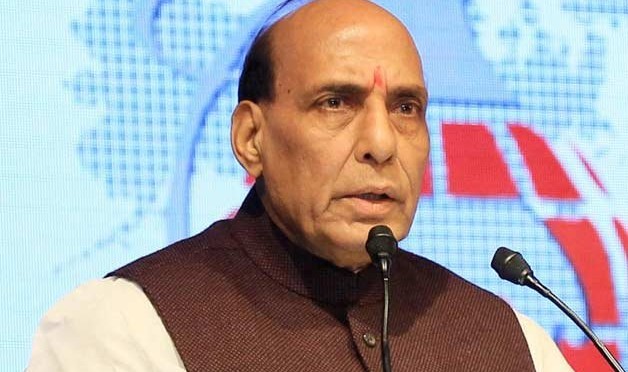 Statement of Union Home Minister on Terrorist Attack at Udhampur

The Union Home Minister Shri Rajnath Singh today made a statement in both the Houses of Parliament on the terrorist attack at Udhampur in Jammu and Kashmir on August 5, 2015. Following is the text, English rendition, of his statement:

“On August 5, 2015 at around 0700 hrs., terrorists attacked a BSF convoy on the Jammu – Srinagar Highway near Narsoo Nallah, Tehsil Chenani, Distt. Udhampur, around 18 kms from Udhampur town. Two BSF personnel, namely Constable Rocky No. 120628139 of 59th Bn. BSF, r/o District Yamuna Nagar, Haryana; and Constable Subhendu Roy, No. 994001199 of 2nd Bn. BSF, r/o District Jalpaiguri, West Bengal, died in the attack and 14 BSF personnel were injured. One of the two militants involved in the attack was killed, while one was subsequently apprehended by the local people and the police.

The apprehended terrorist was brought to Jammu, where he is being questioned by the concerned authorities. Preliminary interrogation of the captured terrorist reveal his identity as Md. Naveed Yakub @ Usman, r/o Faisalabad (Pakistan). He also revealed the identity of his slain accomplice as Md. Nomen @ Nomin (code name) r/o Bhawalpur, Pakistan. In this connection, a Case in FIR No. 60/2015 U/S120/120-B/307/302/RPC, 7/25 Arms Act, 15/16 Unlawful Activities Prevention Act has been registered at Police Station Chenani and further investigation of the case is in progress. Two AK-47 rifles along with some magazines, grenade and ammunition etc. have been recovered from the terrorists.

We strongly condemn the attack and the persistent attempts by terrorists from across the border to vitiate the peaceful atmosphere in Jammu & Kashmir. On behalf of this august House, I take this opportunity to extend our heartfelt condolences to the families of the martyred BSF personnel and our sympathies to those injured in this mindless act of violence. The Security Forces, including the BSF, J&K Police, and the CRPF have shown exemplary courage in thwarting the attack with minimum casualties. Besides the ex-gratia compensation and jobs to be provided to the families of the martyred BSF personnel we will also consider them and others who displayed courage and bravery in the incident for immediate award of the Gallantry Medal.

We especially salute the courage of the unarmed villagers, who despite grave risk to their lives overpowered a fully armed militant without consideration for their own security. We will take up the matter with the State Government for suitably recognizing their conspicuous act of valour.

We are confident that interrogation of the apprehended terrorist will reveal their modus operandi, including the details of their infiltration from across the border and their targets. The Government remains committed to combating terrorism with a strong resolve and ensuring the safety and security of our citizens and our security personnel.”