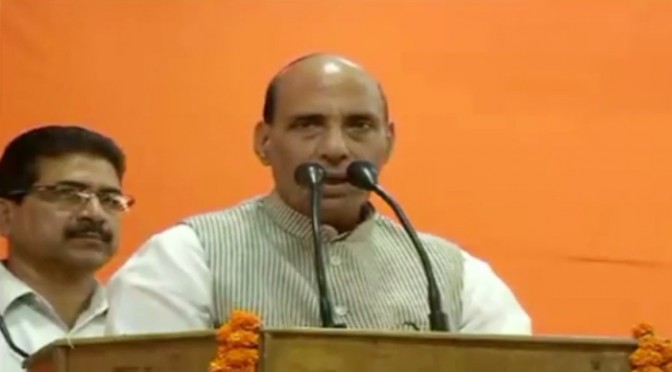 Following is the full text of the statement made by the Union Home Minister, Shri Rajnath Singh in the Lok Sabha today on the terror attack in Gurdaspur district of Punjab on 27th July, 2015:

“On 27th July, 2015 at around 0530 hrs, 3 heavily armed terrorists dressed in army uniforms snatched Maruti Car No. PB 09B 7743 from the outskirts of Dinanagar, District Gurdaspur, Punjab after opening fire at the occupant of the car, Shri Kamaljit Singh, S/o Gian Singh, R/o Dinanagar. Subsequently, these terrorists opened fire indiscriminately in the area around the Bus Stand, Dinanagar and also fired at the Punjab Roadways Bus No. PB 06G 9569 coming from Bamial.

The terrorists thereafter went to the premises behind the Police Station and entered the building being used as the office of the local detachment of the Punjab Home Guards, while firing indiscriminately. Three home guard officials present in this structure sustained bullet injuries and succumbed to their injuries.

Police reinforcements were immediately rushed to the Police Station, Dinanagar. Senior Police Officers, including the Director General of Police, Punjab reached the Police Station to supervise operations against the terrorists.

The Punjab Police engaged the terrorists effectively and made all efforts to apprehend them and prevent their escape and also prevent collateral damage. In the end, all the three terrorists were neutralized in this successful operation. However, Shri Baljeet Singh, Superintendent of Police (Detective), Gurdaspur, who was leading from the front, was martyred. The Punjab Police have recovered a number of incriminating material including three AK 47 rifles, 19 magazinesand two GPS from the dead terrorists, which are being analyzed for further necessary action. I place on record my sincere appreciation for the successful operation conducted by the Punjab Police.

The preliminary analyses of GPS data indicates that the terrorists had infiltrated from Pakistan through the area near Tash in Gurdaspur district, where the Ravi river enters from Pakistan. It is also suspected that the same terrorists planted 05 IEDs on the railway track near Village Talwandi between Dinanagar and Jhakoladi which were subsequently defused by the bomb disposal squad. One night vision device was also recovered from this spot.

The Ministry of Home Affairs monitored the situation closely and was in constant touch with the Punjab Government. The Army and NSG were placed on standby to support the Punjab Police operations. I personally spoke to the Chief Minister of Punjab and assured him of all assistance from the Central Government. The BSF and the Army were also placed on high alert along the border.

In this terror attack, a total number of three civilians, three Home Guards and one Police Officer lost their lives. In addition, 10 civilians and 07 security force personnel were injured.

I also want to inform the House that during the last one month, there were 5 attempts at cross-border infiltration in the J&K sector, out of which 4 were interdicted and 8 terrorists neutralized. In the remaining one instance, the terrorists went back after effective retaliation by the Indian Forces. The Security forces in the border are alert but the difficult terrain coupled with recent heavy rains, resulting in excess flow in the rivers and canals along the border, could have been a factor, in this particular group sneaking into Punjab.

I assure the Hon’ble Members that any effort by the enemies of our nation, to undermine India’s territorial integrity and security, or imperil the safety and security of our citizens will meet an effective and forceful response from our security forces. Government has been, and will remain, resolute in this regard. I take this opportunity to assure the House that the Government is firmly committed to root out terrorism from India. I also assure the House that the Government will do everything possible to prevent cross-border terrorism aimed against India.

The Government offers its heartfelt condolences to the families of civilians and security force personnel killed in this terror attack and wishes the speedy recovery of injured persons.”

It is clear from this couplet that how the security policy and the foreign policy of the Congress Government had been in the past.

Shri Rajnath Singh mentioned that the UPA Government’s Home Minister had coined a new terminology of Hindu terrorism and the LeT Chief Hafiz Muhammad Saeed had congratulated him. The Home Minister said that terrorism does not belong to any caste, colour or religion. Terrorist is just a terrorist. He added that UPA Government had diluted the issue of terrorism at Sharm-al-Sheikh and Havana.