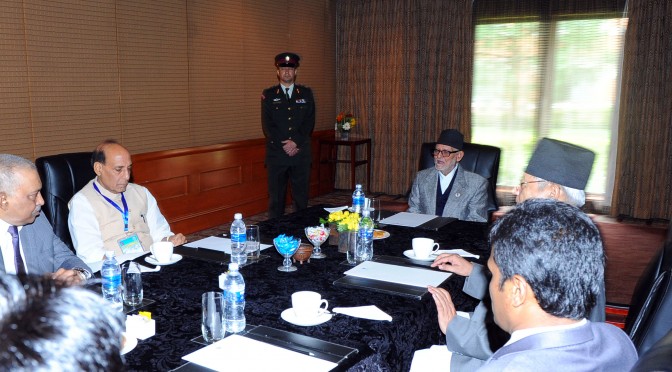 2.    In his opening remarks during the meeting, Hon’be Union Home Minister stressed India’s commitment to a stable, peaceful and prosperous South-Asian neighbourhood. He emphasized the commitment of the present Government led by Prime Minister Shri Narendra Modi to giving primacy to improving India’s relations with all SAARC neighbours.

3.     Hon’ble Home Minister, Shri Rajnath Singh underlined that terrorism is a major issue of concern for the region. This is driven by internal, regional as well as international factors. Further, groups with radical and extremist ideologies pose threats across national boundaries in the volatile security environment.

He also mentioned that  we have to carefully assess the impact of the withdrawal of foreign forces from Afghanistan on the entire South Asian region. He expressed concern about the new threats of extremism, terrorism, violence emerging in this region.

4.     Hon’ble Union Home Minister also stressed that Government of India is committed to securing justice for the families of the victims of deadly terrorist strikes like the killings during the terrorist attack in Mumbai in November 2008.

5.     Shri Rajnath Singh referred to the problems that India is facing due to drug smuggling particularly in Punjab, money laundering, terrorist funding, Cyber Crime, human Trafficking and illegal movement of arms across National boundaries. Linked to this issue is the increasing circulation of counterfeit currency in India’s neighborhood.

6.       Hon’ble Home Minister further stated that the menace of terrorism, drug abuse, drug trafficking etc. can be best fought if we share our experiences at the operational level.

HE PROPOSED TO ESTABLISH A SAARC CENTRE FOR GOOD GOVERNANCE WHERE OFFICERS FROM ALL MEMBER COUNTRIES CAN COME TOGETHER TO EXCHANGE THEIR EXPERIENCES ON GOOD GOVERNANCE.

7.      At the end, he stated that the periodic meeting of SAARC Home Ministers provides India a timely opportunity to underscore the imperative of meaningful and substantive cooperation within the region, against terrorism in particular and organized crime in general.