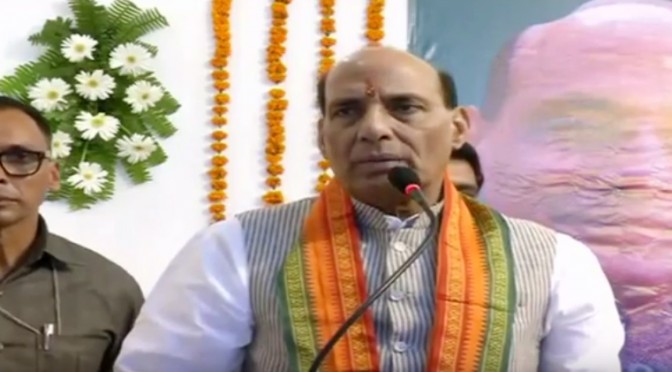 The Union Home Minister Shri Rajnath Singh has said that the Government will uphold the nation’s dignity, security and integrity. At the same time, he reiterated the Government’s readiness to talk to any Naxalite or militant group that shuns the path of violence. Shri Rajnath Singh said this while addressing a function to honour the Senior Citizens in his parliamentary constituency, Lucknow today.

Recalling former Prime Minister Shri Atal Behari Vajpayee’s famous remarks that we can change friends but not our neighbours, Shri Rajnath Singh said the Government in the very beginning extended a hand of friendship by inviting leaders of all SAARC countries for the swearing in ceremony. However, when Pakistan violated the ceasefire, our forces initially showed restraint but when cross-border shelling did not stop, our forces retaliated sharply.

The Union Home Minister said that while no one will be spared who engages in violence in the country, the Government is open to talks with any extremist group that gives up violence. Shri Rajnath Singh said that earlier more than 13 lakhs cattle heads were smuggled into Bangladesh every year, now this figure has come down sharply to just three lakhs per year.