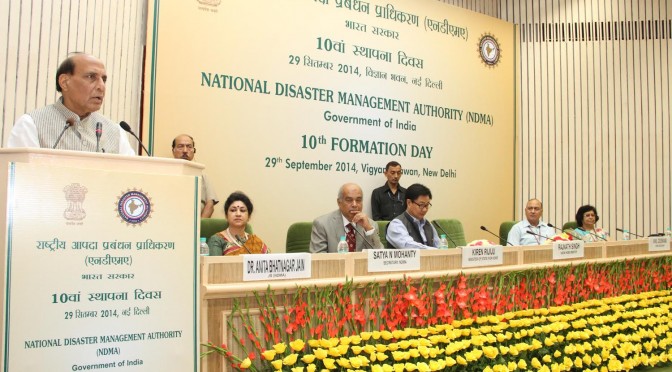 Shri Rajnath Singh mentioned that the NDMA, National Disaster Response Force (NDRF) and the National Institute of Disaster Management (NIDM) are playing an important role in the disaster management, rescue operations and raising the awareness about disaster risk reduction. He said that the NDMA is being restructured and revamped shortly to meet out the new challenges of disaster management. The Home Minister mentioned that the recent experience of lack of connectivity during disasters has delayed the relief and rescue operations. It is necessary that the country has an effective communication system which does not get disrupted during disasters, he added.

The Home Minister said that nature being the mother of all the resources, people should be made aware about the role of nature in disaster management. He emphasized that ‘we should be able to utilize our natural resources in a sustainable manner and over-exploitation of these natural resources must be checked. It is now being realized world-wide that sustainable disaster management is the key to development’.

Shri Rajnath Singh appreciated the role of different agencies involved in disaster management. He mentioned that the Ministry of Home Affairs has constituted two more new battalions of NDRF to strengthen our disaster management capabilities.

The Minister of State for Home Affairs, Shri Kiren Rijiju said that our preparedness for meeting the challenges of natural disasters is required to be improved. He emphasized upon improving our capabilities of early warning system, hydrological observation and prediction of flash-floods in the hilly regions. He mentioned that the recent flood in the state of Jammu & Kashmir has proved that the state was not prepared to meet such disasters. After improving our preparedness, the country should play an important role in this field at the regional and international levels, he added.

Earlier, the Home Secretary, Shri Anil Goswami explained the existing disaster management mechanism in the country and the role played by the different agencies. He mentioned that so far, 26 States/UTs have prepared their State Disaster Management Plan and shared it with NDMA. The NDMA has conducted a number of mock exercises on natural and manmade disasters for inculcating a culture of preparedness and securing the effective participation of the community in different states. Under the NDMA, a specialized field organization NDRF has been developed in to a well-trained dedicated force with strength of about 11000 personnel spread throughout the country. They are also equipped with state-of-the-art equipment required for various response actions, Shri Goswami mentioned.

The Secretary, NDMA, Shri S. N. Mohanty, in his welcome address, said that the works under the on-going projects are moving on a fast pace and actual achievement is more than the target. He also conceptualized mitigation projects covering earth-quakes, floods, landslides and a project for a dedicated communication network to ensure fail-proof communication.

During the two technical sessions, chaired by Shri Jugal Kishore Mohapatra, Secretary, Department of Fertilizers and Dr. S. Parsuraman, Director, Tata Institute of Social Sciences respectively, the experts deliberated upon the guidelines of the NDMA before its finalization.

Dr. P.K. Mishra, Addnl. Principal Secretary to the Prime Minister appreciated the works done by the NDMA, NDRF and NIDM. He also emphasized upon linking of efforts on disaster risk reduction, climate change and conservation of bio-diversity and eco systems to be able to address disaster management in an impactful manner. He highlighted the necessity of a more empowered, effective NDMA and on ensuring wide dissemination of lessons learnt from disasters.

The Secretary (Border Management), Smt. Sneh Lata Kumar and senior officers of MHA and NDMA were also present in the function.