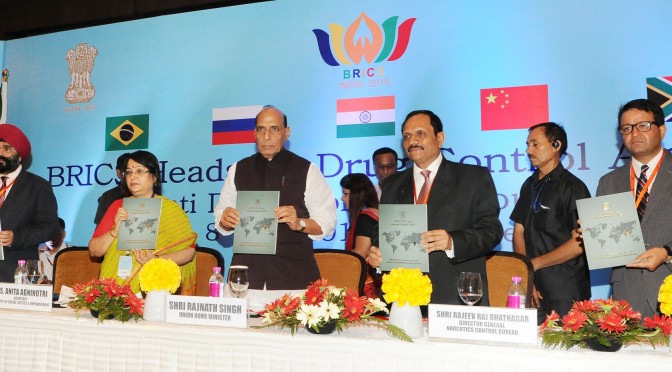 The Union Home Minister Shri Rajnath Singh inaugurated the second anti-drug Working Group meeting of Heads of Drug Control Agencies of BRICS here today. The aim of the meeting is to evaluate the drug abuse situation in the member countries and analyze the legislations of BRICS member states as well as devise modalities to share the best practices of enforcement and demand reduction being followed in the member countries.

Speaking on the occasion, Shri Rajnath Singh said that it is a subject which is posing a serious challenge to the global community today. He said that during the BRICS Ministerial Meeting on Combating the Drug Threat at Moscow on April 22, 2015, it was decided to create a BRICS Anti-Drug Working Group and the first Meeting was held on November 10, 2015, in Moscow. He said that the Anti-Drug Working Group was established with an aim to address the issue on counteracting the illicit trafficking of narcotic drugs, psychotropic substances and their precursors. He expressed his happiness over the fact that this forum has flagged plethora of issues for discussions and also expressed belief that BRICS nations will be able to identify methodologies to address them. He also informed that India has taken over the chairmanship of BRICS this year and will be organizing a series of meetings, conferences & workshops, which will culminate in the 8th Summit of Heads of the States on October 15-16, 2016, in Goa.

Elaborating on significance of BRICS, the Home Minister said that BRICS is an association of major emerging national economies. All the five member countries of BRICS are distinguished by their large and fast-growing economies, having significant political influence on the world and regional affairs and all five are G-20 Members, he added. He said that the BRICS countries represent over 42% of the world population having a combined GDP of approximately 20% of the gross world product. This international forum is an excellent platform for encouraging commercial, social and cultural cooperation between the BRICS nations, Shri Rajnath Singh said.

The Home Minister said that the Prime Minister, Shri Narendra Modi, during his visit to Russia on the occasion of the 7th BRICS Summit had stated that India attaches high importance to BRICS and India believes that this is a great forum that can contribute effectively to mitigate global challenges.

Expressing concern over the drug abuse, Shri Singh said that drug abuse and trafficking poses a serious threat to civilized societies today. It is an issue which transcends all organized criminal enterprises, he added. The Home Minister also expressed deep concern over the fact that today the drug business generates the highest illegal fund flows and leads to narco-terrorism, which poses a serious threat to global security and endangers peace, health and stability across regions. He called upon the BRICS nations to come together to collectively fight against this menace and evil, which is assuming threatening proportions.

The Home Minister said that the problems of drug trafficking and abuse have continued its significant toll on valuable human lives and productive years of many persons around the globe. With the growth and development of world economy, drug traffickers are also seamlessly supplying various types of drugs from one corner to the other, ensuring the availability of the contrabands for vulnerable segment of the society who fall into the trap of drug peddlers, he added. He said that the vulnerability of nations to drugs and crime remains a grave concern for Global society. The illicit cultivation of opium mainly in South West Asia (Afghanistan) and South East Asia and coca bush in South America continue to be a challenge for all of us, he said. He said that apart from natural drugs, abuse and trafficking of synthetic drugs mainly amphetamine types of stimulant and new psychoactive substances are causing serious challenge for health care providers and law enforcement agencies. The magnitude of the problem becomes more apparent when we see considerable drug users suffering from drug related disorders or drug dependence, he added. He also expressed concern that the transmission of infectious diseases such as HIV and Hepatitis ‘C’ and occurrence of drug overdose are potential risk factors that lead to a high level of mortality,

Shri Rajnath Singh expressed belief that this Anti Drug BRICS working meeting will deliberate upon the Drug Problem that continues to pose challenges across the world and specially for BRICS members. He called upon the nations to re-affirm their shared responsibility through a renewed commitment to multilateralism, international cooperation, increased technical assistance and provision of financial resources in our fight against the drug menace within the framework of the three UN conventions.

In his welcome speech, Shri Rajeev Rai Bhatnagar, Director General, Narcotics Control Bureau (NCB) said that the trafficking of drugs and its abuse has a serious adverse impact on health of individuals and well being of our societies. He said that it has a high economic cost and tends to undermine the security and stability of nations. He also said that the drug trafficking has generated illegal fund flows which are a source of funding for anti- national elements and narco-terror. We need to debate as to how we can disrupt these fund flows, he emphasized. He said that drug trafficking in opiates is a major concern for India due to its geographic location between the two major opium producing regions of the world i.e. the Golden Crescent in the West and the Golden Triangle in the East. The illicit cultivation of coca-bush and production of cocaine in South America and its trafficking worldwide is a serious challenge for all of us. He expressed concern that cross border trafficking of heroin, cannabis, hashish, illicit manufacturing of amphetamine type of stimulants and other synthetic drugs, abuse of pharmaceutical drugs and diversion of precursor chemicals, production and trafficking of new psychoactive substances is a matter of concern. Coordinated action against transnational organized drug syndicates is the need of the day, DG, NCB said.

Shri Rajeev Rai Bhatnagar said India has recently amended its laws related to Money Laundering and Foreign Exchange Management Act to effectively counter the illicit financial flows and proceeds of crime generated from drug trafficking and other transnational organized crime. He said India and United Nations Office on Drugs and Crime Regional Office for South Asia are in the advanced stages of setting up a South Asian Regional Intelligence and Coordination Centre (SARICC) to further step up the international cooperation efforts in the region.

Ms Anita Agnihotri, Secretary, Ministry of Social Justice and Empowerment said that the Ministry works for the victims of drug abuse and their problems. She said that drug abuse results into various human tragic issues such as deserted women, children into crimes etc. She emphasised upon the awareness generation and rehabilitation, in cases of drug abuse.

Shri Alok Amitabh Dimri, JS, MEA said that India is hosting BRICS summit in Goa in October this year. He also said that many activities have been lined up at different cities and places of India. The purpose is to engage the local communities in this process, he added. He said that this is in line with the Prime Minister Shri Narendra Modi’s vision to reach to people and also shift focus from being summit-centric to the activities which are spread throughout the year. He said that this meeting is one of such activities being organised regarding BRICS Summit.

During the inauguration function, Shri Rajnath Singh also released the Annual Report of the Narcotics Control Bureau for the year 2015-16.