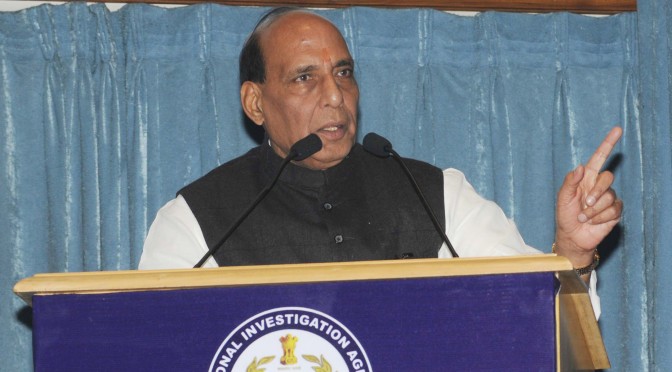 While addressing on the occasion, Shri Rajnath Singh said that any incident happening in Delhi has a wider impact across the country, as Delhi being the national capital. He said that Delhi Police has to take care of various issues including providing security during National and International conferences, dealing with terror related activities, providing security to VIPs and traffic management due to increase in number of vehicles. He appreciated the Delhi Police for making all efforts to maintain the Law and Order situation in Delhi.

The Home Minister said that new types of crimes are emerging and these crimes cannot be tackled without new initiatives being taken by the police. He also complemented Delhi Police for coming up with various digital initiatives like Twitter handle, Beat book App for Beat Constables etc. A large number of CCTV cameras are being used by the Delhi Police for safety and security of women, he added.

Emphasising on the role of women in policing, Shri Rajnath Singh said that 33% of the police force has to be employed by women. In this regard, advisory has been sent to all the states, he added. He also said that the people from North East are being employed in the Delhi Police.

Shri Rajnath Singh announced Rs. 5 crore for the Police Welfare Fund. He also presented the medals for meritorious service to the policemen and also distributed them awards such as Excellence award, Life Saver award etc. on the occasion. The Home Minister also inaugurated the Police Families Welfare Society.