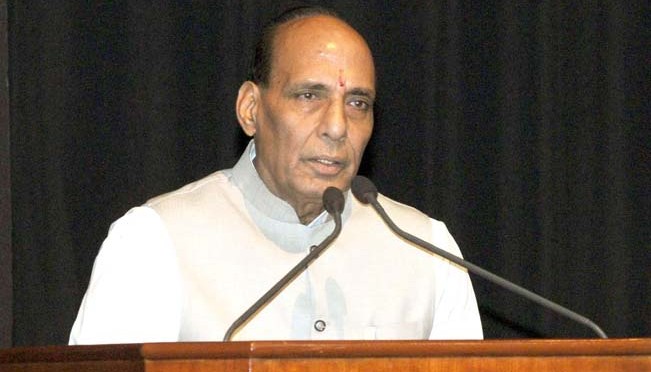 Union Home Minister Shri Rajnath Singh has asked the Sashastra Seema Bal (SSB) to take the lead role in curtailing the menace of Fake Indian Currency Notes (FICN). Addressing the `Passing Out Parade` of Assistant Commandants of SSB at Srinagar in Uttarakhand today, he said the SSB is at the vanguard of porous International Borders through which most of the FICN is now being smuggled into the country.

Shri Rajnath Singh also asked the SSB to remain vigilant on the presence of fundamentalist and anti-India forces in the areas in vicinity of the borders. He noted that the SSB is actively guarding India-Nepal and India-Bhutan borders and despite being `open borders` there has been peace on both the fronts. The Union Home Minister also lauded the role of SSB in anti-insurgency operations against the NDFB in Assam. He said that the SSB has almost destroyed the backbone of the NDFB.

Shri Rajnath Singh said the SSB should also think of operating FM radio channels in the border areas so that the Prime Minister`s `Man Ki Baat` programme could also be heard in the remote locations. “If necessity arises I can also find time to address our jawans posted in border areas through these SSB-operated FM channels,” he said. The Union Home Minister also suggested that the SSB can open India Cultural Centres in border districts to spread the message of nationalism in areas close to the borders.

Shri Rajnath Singh said the SSB was founded in 1963 to spread the message of nationalism in areas close to the borders and that the force has been successful in its mission. Exhorting the SSB personnel, the Union Home Minister said that the uniform which they are wearing is not merely a piece of plain cloth. “Garv Karo Is Vardi Par,” he said. Referring to the freedom struggle, the Home Minister said that it was the feeling of `Rashtriya Swabhiman` which made the country free. The youth of this country sacrificed their lives for freedom. He narrated the story of Ashfaq Ullah Khan who sacrificed his life for the country.

Earlier after reaching the SSB Centre in Srinagar, the Union Home Minister inspected the `Guard of Honour`. He later inspected the devices and instruments used by the SSB in its operations. Shri Rajnath Singh was accompanied by Director General, SSB, Shri BD Sharma.