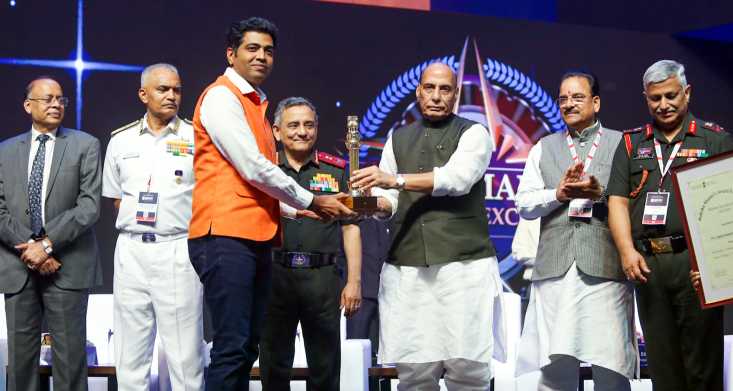 Raksha Mantri Shri Rajnath Singh gave away Raksha Mantri’s Awards for Excellence in defence and aerospace sector for the year 2021-22 to Indian Defence Industries, including the private sector, at an event organised as part of 12th DefExpo in Gandhinagar, Gujarat on October 20, 2022. A total of 22 awards were given under various categories viz. Indigenisation/Import substitution, Innovation/ Technological Breakthrough and Exports. Of these 22 awards, 13 were bagged by private industries and the remaining by the DPSUs/PSUs. These awards were equitably given to enterprises of various sizes, i.e., large, medium, small and start-up enterprises in order to provide a level playing field.

In his address, the Raksha Mantri emphasised that the core objectives of these awards are to encourage and reward all-round excellence in various dimensions of organisational performance, facilitate widening and deepening of industrial base in Indian defence and aerospace sector by identifying ‘hidden gems’, especially from MSME/ start-Up segment and promoting them as role models for others. He appreciated the fact that the awards have been re-established from 2022, incorporating private industries. This will boost the ‘Aatmanirbhar Bharat Abhiyan’ of the government and encourage the development of these companies, he said.

The Raksha Mantri described the Indian defence ecosystem as beautiful and promising amalgamation of the Government and defence manufacturing industry. While appreciating the present joint efforts which has bolstered the defence sector, he called for continuous collaborative efforts for sustainable growth of this ecosystem.

Shri Rajnath Singh highlighted that the aerospace and defence sector, at present, is an industry of about Rs 80,000 crore, in which the contribution of the private sector has increased to about Rs 17,000 crore. He voiced the vision of the Ministry of Defence (MoD) to showcase the capabilities of the Indian defence and aerospace sector to the world, which he said is possible if items, which are state-of-the-art and low cost, are manufactured. Top quality items reflect the quality of the producing country, he said, urging the industry to manufacture state-of-the-art cost-effective products. “Excellence in products will be the foundation of our self-reliance,” he said.

The Raksha Mantri listed out a number of steps taken by the Government to achieve excellence in defence and aerospace sector, thereby realising Prime Minister Shri Narendra Modi’s vision of ‘Aatmanirbhar Bharat’. He made special mention about the Positive Indigenisation Lists which have been notified to achieve self-reliance in defence manufacturing. He added that a Defence Investor Cell has been created in the MoD to provide all necessary information and address queries related to investment opportunities, procedures and regulatory requirements. He also shed light on indigenisation portal ‘Srijan’, which is a one stop portal for information about the defence items required by the Services.

Shri Rajnath Singh stressed on the need to promote IPR in the defence sector, which were highlighted through these Excellence awards. “Mission Raksha Gyan Shakti was launched to promote the creation of intellectual property in the defence sector. An Intellectual Property Facilitation Cell has been set up to provide general advisory regarding IPR for patents, trademarks, designs and copyrights etc. Similar reformative steps are being taken to promote IPR in the defence sector,” he said, exuding confidence that with all these initiatives, Indian defence and aerospace industries will get more opportunities for expansion and recognition and their products are able to compete with other reputed companies, nationally and internationally.

The Raksha Mantri emphasised to reforms required for the growth of the industry is an ongoing process, for which continuous and laborious efforts of all stakeholders are needed. He called upon the Indian industry to come forward and provide constructive suggestions to achieve the ultimate goal of complete self-reliance. He assured them that the MoD is committed to fulfil the expectations of the industry.