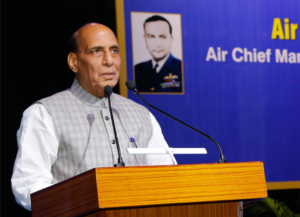 Air Chief Marshal PC Lal was commissioned in the IAF in 1939. He was awarded the Distinguished Flying Cross during the Burma Campaign in World War II.  He served as the Vice Chief of the Air Staff during the 1965 war. While on deputation to Hindustan Aeronautics Limited (HAL) in 1966, he served as the Chairman and Managing Director of HAL. As the 7th Chief of the Air Staff during the 1971 war, his outstanding leadership proved to be a decisive factor for India’s victory and for the liberation of Bangladesh. He was awarded the Padma Bhushan in 1966 and the Padma Vibhushan in 1972 for his contributions during the two wars. After retirement in 1973, he was appointed as the chairman and managing director (CMD) of Indian Airlines and later chairman of Air India.