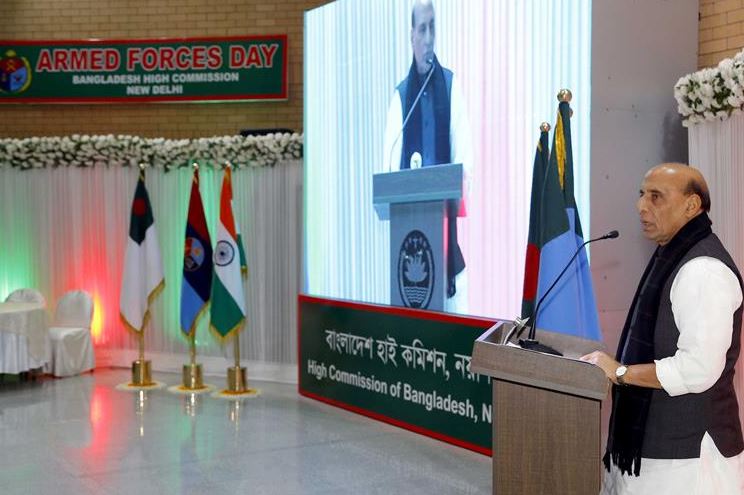 ·      India is deeply sensitive to the security and development concerns of its neighbours; hopes for reciprocal level of sensitivity on the part the neighbours

·      Armed Forces must remain engaged with each other for mutual capability enhancement, to respond to contingencies & realise the shared goals of providing security & prosperity to our people

In his address, the Raksha Mantri congratulated the Armed Forces of Bangladesh on behalf of the Indian Armed Forces & Government of India and wished them the very best in their endeavour towards peace and security. “This year is of extraordinary significance for India-Bangladesh relations as we commemorate the Golden Jubilee of the Liberation of Bangladesh, the fifty years India-Bangladesh diplomatic ties and the birth centenary of Banga Bandhu Sheikh Mujibur Rahman. In this momentous time, I salute the valiant struggle of the Muktibahini in the Mutktijudda – War of Liberation – in 1971. Spirit of Mukti judhha forms the core of today’s Armed Forces of Bangladesh,” he said.

Paying glowing tributes to Banga Bandhu Sheikh Mujibur Rahman, Shri Rajnath Singh said, the inspiring leadership of the first President of Bangladesh was the guiding light for the people of the country in their struggle for freedom. Banga Bandhu’s ideals form the foundation of the shinning Bangladesh steadily advancing in its path of development, he added.

The Raksha Mantri also paid rich tributes to brave soldiers of the Indian Armed Forces who stood steadfast with Bangladesh during the War of Liberation of Bangladesh, saying that it marked a golden chapter in the world history in 20th century. He also remembered the extraordinary leadership in India, which rose to the occasion against all odds and limitations in 1971, in support of a nation fighting against the injustice and unspeakable atrocities. He stated that India’s response to the events of 1971 was a reflection of a civilization, more than a mere matter of state policy. “India’s all-out support came naturally out of historical experience and deep emotional, cultural, linguistic and fraternal ties that bind together the people of India and Bangladesh. We are proud that this friendship, founded in the shared sacrifice, has prospered by leaps and bounds,” he added.

Shri Rajnath Singh described the Bangladesh War of Liberation as an unprecedented event in the 20th century history. “It was a moral fight against injustice, atrocities and oppression. Ordinary people were brutally maimed and murdered. The barbaric atrocities of Operation Searchlight stirred the conscience of the world. However, the atrocities resonated strongest in the hearts and minds of ordinary Indians. Each in India truly felt that his or her own brother and sister were under attack. India herself was in poverty, but there was no hesitation in wholehearted moral and material support to the people of Bangladesh in their fight for liberation.  This was a fight to the end from an oppressive and undemocratic regime, which defied people’s mandate. India gave shelter to millions of refugees even when we did not have enough for our own. A struggling nation gave shoulder to another,” he said. The Raksha Mantri appreciated the gesture of Government of Bangladesh for erecting a memorial for the Indian soldiers at Ashuganj in Bangladesh.

The Raksha Mantri asserted that the proud and professional Bangladesh Armed Forces of today owe their foundational values to the Liberation War of 1971. He appreciated the fact that today the Armed Forces of Bangladesh are one of the highest contributors to the UN Peace Keeping Forces and are respected globally for their professionalism and commitment to just causes.

Shri Rajnath Singh called for keeping the spirit of Liberation War alive in the minds of the younger generations, especially those who join the Armed Forces. “It is all the more important, because the forces which brought untold atrocities and miseries on Bangladesh in 1971, and forces against whom we spilt our blood together, are far from finished and gone.  They are lurking around us in different forms and excuses, but indistinguishable from their past in spewing hatred, intolerance and violence. Our tasks are no less formidable than they were in 1971.  Reaching out to new generations with true stories of 1971 is the least we can do,” he said.

The Raksha Mantri expressed satisfaction that the close defence cooperation between India & Bangladesh, which started during the Liberation War, is continuing apace. “Defence cooperation between the two countries has grown steadily in the last few years by way of several activities – defence dialogue, staff talks, joint training, exercise and high-level exchanges. It is remarkable that all three Service Chiefs of Bangladesh have visited India this year and from India, the Chiefs of Army and Air Force visited Bangladesh this year. India has extended a Line of Credit worth USD 500 million to Bangladesh for defence equipment. We hope that this gesture will spur joint activities not only in acquisition of assets but also in co-development and co-production of defence material,” he added.

Shri Rajnath Singh added that India is keen to continue working closely with Bangladesh helping and supporting each other’s defence and security concerns. He said, India is deeply sensitive to the security and development concerns of its neighbours and hopes for reciprocal level of sensitivity on the part the neighbours towards the concerns of India. “In this context, it is critical for our Armed Forces to remain engaged with each other for mutual capability enhancement, to respond to contingencies and to realise the shared goals of providing security and prosperity to our people,” he said.

The Raksha Mantri added that India & Bangladesh strong partners in bringing progress and prosperity for the peoples of South Asia through robust and expanding regional cooperation. “Both are facing challenges which are similar. Today, we are fighting shoulder to shoulder against common challenges such poverty and hunger, surge of terrorism and extremist ideologies and climate change,” he said.

Shri Rajnath Singh lauded the progress achieved by Bangladesh over the years and said that it currently one of the fastest growing economies in the world. “Various developmental works are taking place across the country. India is privileged to be one of Bangladesh’s major development partners with a total portfolio of close to US $10 billion. The partnership is mutual – as the darkest moments of recent second wave of the pandemic showed – when we received substantial medical help from Bangladesh,” he said.

Shri Rajnath Singh added that for India, Bangladesh’s success is its own success and in its own interest. “India-Bangladesh bilateral ties have been passing through a ‘shonali adhyay’ – golden phase. While cooperation in traditional areas like security, trade, connectivity and people to people exchanges have steadily deepened, the partnership is expanding to new and emerging areas like nuclear technology, IT, innovation and blue economy,” he said.

The Raksha Mantri congratulated Bangladesh as 6th December, the date on which India recognised independent sovereign Bangladesh, will be commemorated as ‘Maitree Diwas’ in India and Bangladesh as well as in 18 other countries around the world.