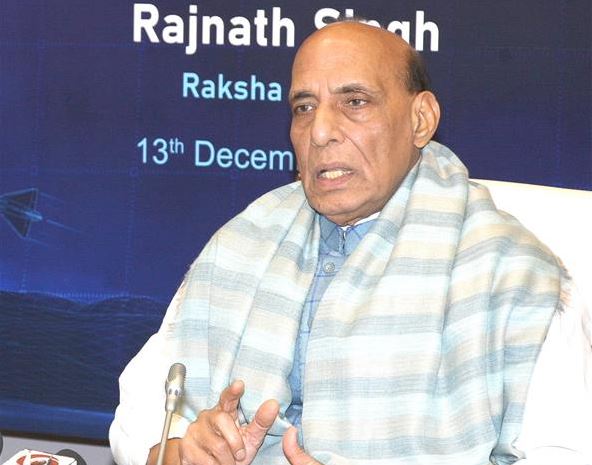 ·        Events to raise awareness about progress made in defence sector, instill national spirit among people & further strengthen their trust in our defence preparedness

·        Continued public-private partnership will help to soon achieve ‘Make in India, Make for the World’

Raksha Mantri Shri Rajnath Singh inaugurated several iconic events of Department of Defence Production (DDP), as part of Ministry of Defence dedicated week from December 13-19, 2021 to celebrate ‘Azadi Ka Amrit Mahotsav’ commemorating 75 years of Independence. A virtual exhibition, ‘Path to Pride’, public exhibitions, curated museums and a booklet showcasing 75 resolutions of DDP were inaugurated/launched by the Raksha Mantri. Congratulating DDP for organising the week-long nation-wide events, he said, it will be helpful in spreading information about the efforts towards making India a net defence exporter from a net defence importer.

In his address, Shri Rajnath Singh also paid rich tributes to country’s Chief of Defence Staff General Bipin Rawat and other Armed Forces personnel, who lost their lives in a helicopter crash in Tamil Nadu on December 08, 2021 and extended his condolences to the family members. “General Rawat still had a lot to do. Modernisation of our Armed Forces and complete self-reliance in the defence sector were subjects close to his heart. Now, it is our responsibility to work tirelessly to achieve the objective even sooner,” he added.

Sharing his insights on what freedom means to a Nation, the Raksha Mantri said, freedom is not just a thing to be attained or earned, it is also a thing to maintain, for which one has to strive continuously. “Freedom is not a goal, but a path. To a sovereign nation, freedom means the ability and capacity to take any decision related to defence and socio-economic development. In any situation, we can take a decision only when we are completely self-reliant,” he stressed.

Shri Rajnath Singh was of the view that while India attained freedom in the fields such as agriculture, education and health post-Independence, not much attention was paid towards the defence sector. He said, before the Government came to power in 2014, the defence sector lagged behind due to lack of investment, innovation and research & development. This led to dependency on imports to meet the defence requirements of the country and affected the strategic autonomy, he added. The Raksha Mantri pointed out that the present government understood the importance of self-reliance in defence and has been making constant efforts to achieve ‘Aatmanirbharta’ in the sector. “The defence sector has entered into a new era due to the policies, vision and mindset of this Government,” he added.

Saying that this government does not shy away from taking bold decisions in the interest of the Nation, the Raksha Mantri listed out a number of policy reforms aimed at promoting self-reliance in defence manufacturing. He made special mention of the corporatisation of Ordnance Factory Board (OFB), saying that the move will make OFB more effective &efficient and unleash its true potential. Other reforms mentioned by the Raksha Mantri include setting up of Defence Industrial Corridors in Uttar Pradesh & Tamil Nadu; increasing the FDI limit to 74 per cent through automatic route & 100 per cent through Government route under certain circumstances; unveiling of draft Defence Production and Export Promotion Policy 2020; notifying two positive indigenisation lists of over 200 items; earmarking of about 64 per cent of its modernisation funds under the capital acquisition budget for 2021-22 for procurement from domestic industries and launch of Innovations For Defence Excellence (iDEX) initiative.

Shri Rajnath Singh appreciated the fact that the private sector has contributed to about 90 per cent of country’s defence exports. He exuded confidence this active and continued partnership between the Government and the private sector will help to soon achieve ‘Make in India, Make for the World’ as envisioned by Prime Minister Shri Narendra Modi. He hoped that the week-long events will generate awareness among people about the progress made in the defence sector, instill national spirit and further strengthen their trust in the country’s defence preparedness.

Defence Secretary Dr Ajay Kumar said, the week-long events will make people aware of the achievements, resolve and vision of DDP. He reiterated the resolve to continue to move forward without any comprise to achieve ‘Aatmanirbhar Bharat’.

As a run up to the DefExpo-2022 and with an aim to reach out to a larger audience in India and abroad, a Virtual Exhibition named ‘Path to Pride’ was launched to showcase the journey of 75 years for ‘Aatmanirbhar’ defence manufacturing through 75 stories of growth & evolution across the domains of land, naval, air, missile and electronic systems. This virtual interactive platform offers a repository of India’s defence capabilities, indigenisation efforts, future readiness and policy reforms, augmenting India’s emergence as the global defence manufacturing hub.

Public exhibitions organised by Defence Public Sector Undertakings (DPSUs), Directorate General of Quality Assurance (DGQA) and Directorate General of Aeronautical Quality Assurance (DGAQA) at 75 locations across the country were also simultaneously inaugurated through virtual mode showcasing the journey of growth and development of defence manufacturing in the country. These exhibitions will be displaying an array of indigenous marquee defence products during the week. The exhibitions will offer a unique opportunity to the general public to have a look and feel of modern defence weapons, arms, ammunition& other equipment and on the top of it, a proud feeling of nationalism.

Curated museums at Bangalore, Mumbai, Kolkata, Pune, Avadi – Chennai and Goa were also inaugurated through virtual mode with a purpose to inform, educate, and inspire the masses. A booklet listing 75 commitments to the nation to be fulfilled by August 15, 2022 was also unveiled. The commitments aim to boost defence manufacturing, bring efficiency, facilitate Ease of Doing Business and reduce the regulatory compliance burden across the comprehensive defence production infrastructure.