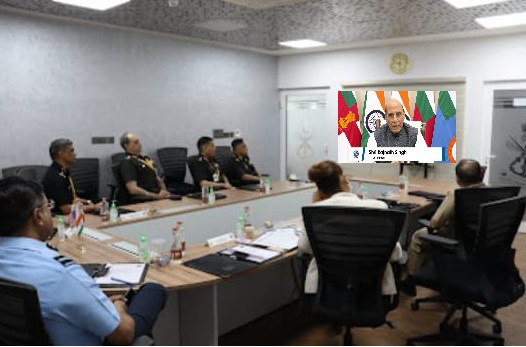 Raksha Mantri Shri Rajnath Singh virtually inaugurated, on March 07, 2022, the four-day Indo-Pacific Military Health Exchange (IPMHE) conference co-hosted by Armed Forces Medical Services (AFMS) and US Indo-Pacific Command (USINDOPACOM). Shri Rajnath Singh described medical service as an important pillar for any military, saying that in addition to their own combat-related duties, they are the most valuable second responders in times of natural and man-made calamities & crises and are in a perpetual state of readiness. He lauded the AFMS for promoting and delivering preventive, curative, rehabilitative medical care to the serving soldier/sailor/airman and their families and the veterans with utmost professionalism.

The theme of the conference is ‘Military Healthcare in a Volatile, Uncertain, Complex and Ambiguous (VUCA) World’. The conference, which will continue till March 10, 2022, aims to enhance cooperation and joint manship in military medicine. It will cover many important topics including operational/combat medical care, tropical medicine, field surgery, field anaesthesia, aviation & marine medicine emergencies etc.

The conference is attended by more than 600 Indian and foreign delegates from over 38 countries. A delegation of 20 members from the organising committee of the USINDOPACOM is in New Delhi to co-host the conference. The delegates and speakers will interact and share experiences over the four days on 110 topics.

The Raksha Mantri commended the significant role played by AFMS and USINDOPACOM in addressing the challenges posed by COVID-19. He said, despite limitations such as short warning period, pressure on existing infrastructure and disparity in resources, the last two years have brought out the very best amongst the medical fraternity, civil society volunteer groups and governments which went out of the way to help those in need during the pandemic.

“The last two years have witnessed best practices being developed to overcome disruptions in supply chain, ensure availability of drugs, other medical supplies, vaccines and the knowhow of treatment breakthroughs. We witnessed the Armed Forces criss-cross the seas and skies to reach those who needed assistance in times of calamity. Protocols were designed and implemented to safeguard those who remained in frontline duties. All this became possible because our global village upheld the traditional virtues of community living, sharing and placing the larger good before self. And it was accompanied by modern-day advances of shared learning, shared knowledge and shared communication,” the Raksha Mantri said. He added that this collective experience has highlighted various invaluable lessons for facing similar challenges in the future.

The Raksha Mantri stated that the idea of Indo-Pacific reflects the sentiment of ‘Vasudhaiva Kutumbakam’ (the world is one family). He recalled Prime Minister Shri Narendra Modi’s address at the Shangri La Dialogue in Singapore in 2018 where he had said “The Indo-Pacific stands for a free, open, inclusive region, which embraces all in a common pursuit of progress and prosperity. It includes all nations in this geography as also others beyond who have a stake in it.” This sentiment, Shri Rajnath Singh said, is best exemplified by the contribution of the medical profession that has universally been considered noble.

Shri Rajnath Singh praised the meaningful impact of the IPMHE in the field of military medicine across the world through a sustained professional collaboration between doctors, nurses, dentists and medical administrators. “The IPMHE has clearly proved their ability to deliver health care under the most trying circumstances. This has been achieved through hard training, perseverance and motivation over many years, which our health care professionals in uniform have in abundance. To make the impact of military medicine more meaningful, Armed Forces of various countries and the USINDOPACOM have created an important platform in the form of this conference for sharing experiences and facilitate gainful learning,” he said. The Raksha Mantri appreciated the fact that the IPMHE is addressing contemporary, real-time and relevant issues pertaining to military medicine, humanitarian assistance, disaster relief, infectious diseases, medical logistics and related issues.

The Raksha Mantri stressed on the importance of military medicine and the need for increased cooperation among countries in issues that affect the health of the world. He called for continued improvement in medical research and medical training, keeping with the present scenario, saying that the deliberations on these during the conference will be beneficial to all. “If you want something new, you have to stop doing something old. Therefore, new creations and innovations are necessary for the advancement in any field. I am glad to know that the innovation session will showcase in-house innovations by our young and able medical officers,” he added.

Sharing his views on the important role played by women in the Armed Forces across the world, Shri Rajnath Singh said, the Government believes in providing enhanced responsibilities to women at par with their male counterparts. “Different countries have different terms of engagement and employment for women in uniform. In India, women have distinguished themselves in the field of Combat Medical Care, not only as health care providers but also through their leadership at the highest level of the profession,” he said.

In his welcome address, DG AFMS Surgeon Vice Admiral Rajat Datta highlighted the role of military healthcare in an unpredictable world. He brought out that the purpose of the conference is to share knowledge and create a dynamic networking among nations. The DGAFMS also sensitised the environment about planning medical response during biological disaster in a VUCA world in his talk.

Command Surgeon, US Navy Rear Admiral Pamela C Miller highlighted the importance of shared practices and team work to meet medical challenges in rapidly changing scenarios. She also thanked India for hosting the conference despite the uncertainties in the past two years. The keynote address was delivered by Chief Scientist, WHO Dr Soumya Swaminathan, who spoke on ‘Global Health Challenges and the role of leadership in a VUCA world’. On the occasion, an e-souvenir was jointly released by DGAFMS and Command Surgeon, USINDOPACOM.