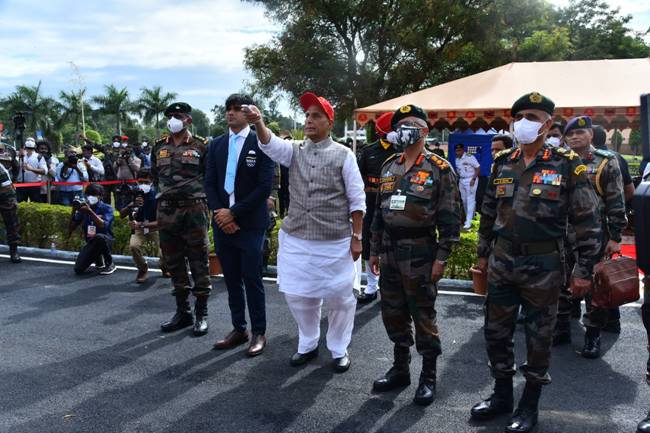 During his maiden visit, the Raksha Mantri felicitated Olympians from the three services. In the unveiling ceremony, he named the Army Sports Institute stadium as “Neeraj Chopra Stadium”. He then addressed the troops and interacted with the budding sportsmen of Army Sports Institute.

In a tweet Raksha Mantri said “Felicitated Subedar Neeraj Chopra at the Army Sports Institute in Pune today for his amazing performance at Tokyo Olympics. He made the country proud by winning the Olympics Gold Medal. Now, the ASI has renamed the Stadium after him. Wishing him success in his future endeavours.”

“Delighted to facilitate all the Armed Forces personnel who participated in the Tokyo Olympics. My good wishes to them for a successful career ahead,” he added. 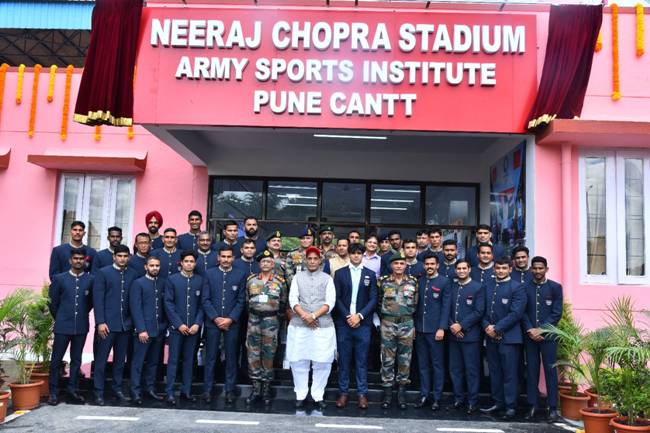 The Indian Army’s “Mission Olympics” programme was launched in 2001 with an intent to deliver medal winning performances in Olympics and other international events. The focus of the Indian Army is to identify and train promising sportspersons in 11 disciplines. Mission Olympics of Indian Army through Army Sports Institute has been spearheading this initiative of the Army.

The Raksha Mantri complimented Army Sports Institute for the exceptional training facilities being provided to the sportsperson of the country. He offered full support in providing financial and administrative assistance to the institute. The visit of the Raksha Mantri boosted the morale of the sportsmen, who are striving towards achieving the aim of excellence for the country.

The Raksha Mantri also visited Headquarters Southern Command based at Pune. The Raksha Mantri was briefed by Lieutenant General JS Nain, Army Commander, Southern Command on various operational, training and administrative issues of the largest command of Indian Army. He complimented Southern Command for its professional approach and operational readiness towards ensuring sovereignty of the Nation. He also congratulated the Command for its outstanding contribution in various Humanitarian Assistance and Disaster Relief (HADR) operations in peninsular India, particularly towards assistance provided to civil administration in the recent flood relief operations and the pandemic. He appreciated the efforts of Southern Command for engaging with Research & Development institutes to further the Aatmanirbhar Bharat initiative of the Government.