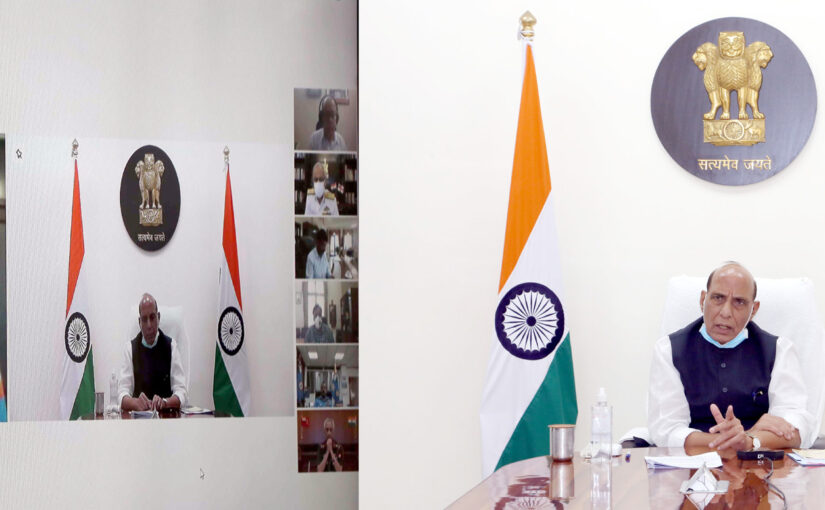 Raksha Mantri Shri Rajnath Singh held a meeting to review the preparedness and assistance being provided by the Armed Forces to civil authorities to tackle the situation arising out of Cyclone Tauktae, through a video conference on May 17, 2021. Chief of Defence Staff General Bipin Rawat, Defence Secretary Dr Ajay Kumar, Chief of Naval Staff Admiral Karambir Singh, Chief of Air Staff Air Chief Marshal R K S Bhadauria and Chief of Army Staff General M M Naravane and Secretary Department of Defence R&D and Chairman, Defence Research and Development Organisation (DRDO) were among those who attended the meeting.

Shri Rajnath Singh was informed that 11 Indian Navy Diving Teams have been kept on standby in case of any request from authorities of affected states. Twelve flood rescue teams and medical teams have been earmarked for immediate response and deployment. Repair and rescue teams have also been formed to undertake urgent infrastructural repairs post-cyclone if required.

Three ships (Talwar, Tarkash and Tabar) are on standby with aid and relief material for immediate assistance to affected areas, if required. Balance ships on the Western seaboard are also on standby for assistance to fishing boats/small boats stranded due to rough weather. Navy’s Maritime Reconnaissance aircraft on surveillance are continuously broadcasting cyclone warnings to fishermen.

Shri Rajnath Singh was also informed that the assets of the Indian Navy were pressed into service to rescue the stranded crew of Indian flagged Tug ‘Coromandel Supporter XI’ off Karnataka coast. Another helicopter from the Naval air station in Goa has been deployed to assist in the search of missing crew members of the Indian flagged Tug Alliance.

Shri Rajnath Singh was also briefed that two Army columns have been mobilised from Jamnagar for Diu along with Engineer Task Force. Two more columns staged forward to Junagadh for immediate response in case the need arises. He was informed that the Army is in constant touch with the civil administration.

The Raksha Mantri directed the three Services to provide all possible assistance to the civil administration to deal with the emerging situation.