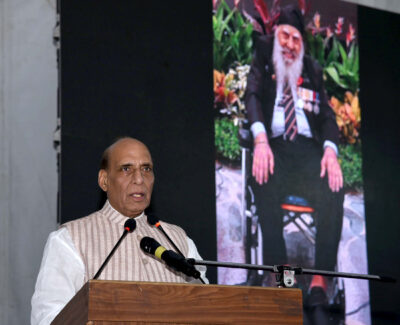 Raksha Mantri Shri Rajnath Singh today paid glowing tributes to Indian National Army (INA) veteran Major Ishwar Lal Singh  at a memorial service held in New Delhi. After laying a wreath, at the urn containing ashes of Major Ishwar Lal Singh, the Raksha Mantri fondly recalled his meeting with the INA veteran about three years ago in Singapore. He said that  India will not forget the sacrifices made by the soldiers of the Indian National Army (INA) and its leader  Netaji Subhash Chandra Bose. Shri Rajnath Singh said Netaji was the epitome of values and ideals and he fought for values and never compromised on the ideals of freedom.

The memorial service in honor of Major Ishwar Lal was organized by Ministry of Culture and Archeological Survey of India.  Many Army veterans were present on the occasion and paid their tributes to mortal remains of INA veteran.