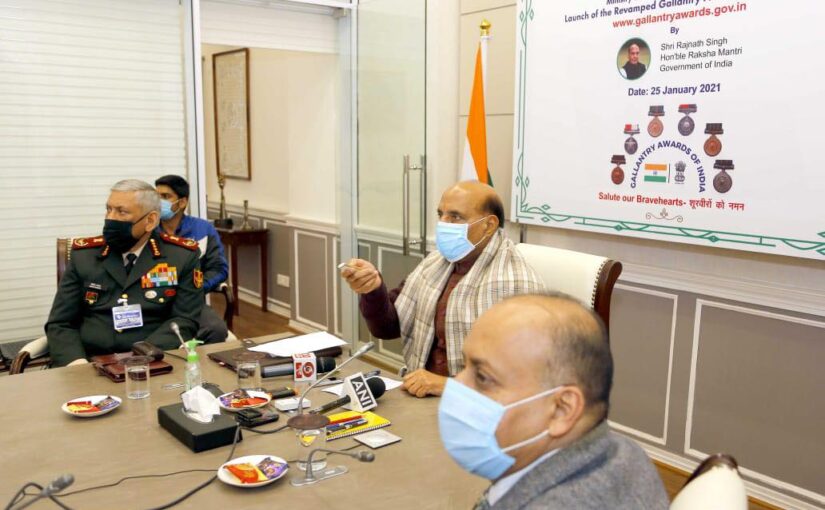 Raksha Mantri, Shri Rajnath Singh launched a revamped version of the Gallantry Awards Portal  www.gallantryawards.gov.in today on the eve of the Republic Day 2021. This Portal will serve as a one-stop virtual platform to honour the immortal contribution of the fearless Gallantry Awardees of India. Nationwide Quiz and ‘Selfie For Bravehearts’ Initiatives were also launched on the portal.

Since our nation’s independence, our brave men and women have displayed exemplary courage and devotion for the nation. Under the visionary leadership of Prime Minister of India, Shri Narendra Modi, the Government of India has accorded topmost priority to honour the immortal contribution of its Bravehearts for protecting the unity and integrity of our nation. Launching of a revamped Gallantry Awards Portal is a key initiative undertaken in this regard.

Speaking during the launch program, Raksha Mantri hailed the significant role played by the Gallantry Awardees of India in not only securing our nation but also inspiring the future generations of the country to contribute for protecting our motherland. He further stated that in the coming years, the Gallantry Awards Portal shall transform as an interactive, participative and dynamic platform that shall instill a sense of patriotism and devotion among the citizens especially the Yuva Shakti of the nation. Recalling some of the initiatives like the implementation of OROP and building of National War Memorial, Shri Rajnath Singh said the government has been doing everything to acknowledge the contributions of our veterans and martyrs.

Defence Secretary Dr Ajay Kumar said that the revamped website has new enriched content, graphics and participative features aimed towards celebrating valour of Armed Forces in India, to provide a wholesome experience to the user and to develop an ecosystem for honouring the contribution of martyrs in nation-building.

On the occasion of the launch of the revamped Gallantry Awards Portal, a nationwide Gallantry Awards Quiz has also been initiated on the Portal platform. This quiz aims to provide an opportunity to the bright minds from across the nation to showcase their knowledge about the Gallantry Awardees of India. This program shall be organised from 26 January 2021 to 26 February 2021. Another initiative, ‘Selfie for Bravehearts’ was also launched which encourages and invites citizens to click their selfie images in front of war memorials and monuments across the country and show their support for the Gallantry Awardees of the nation. Raksha Mantri urged people to participate in the Quiz competition and Selfie initiative.