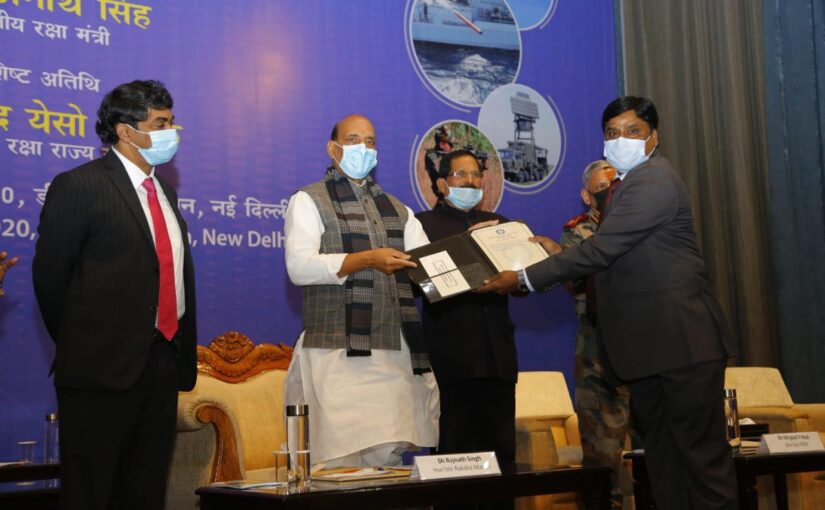 The awards include DRDO Lifetime Achievement Award – 2018 to Shri N V Kadam for his contributions for developing control and guidance schemes for missiles. Excellence awards were given to academia and industry for technology absorption. Besides, individual awards, team awards, technology spin-off awards, techno managerial awards and awards in other categories were also given.

Complimenting the DRDO scientists for their outstanding work in developing defence systems, Raksha Mantri said that DRDO has been developing high level technologies for defence systems for increasing the capacity and capability of armed forces.

Shri Rajnath Singh lauded the role of DRDO scientists in combating COVID-19 pandemic. He congratulated all the scientists who received the awards and wished them the very best for their future endeavours.

Speaking on the occasion, Raksha Rajya Mantri Shri Shripad Naik said that DRDO is playing an important role in self-reliance of Defence. He appreciated the efforts of DRDO towards development of technologies and products for combating COVID-19.

Chief of Defence Staff General Bipin Rawat in his address congratulated the scientific fraternity for their achievements and emphasised on the need of working at the fast pace so that the country will have most of the indigenous systems.

The development of these high technology systems has led to higher self-reliance in Defence technologies.These three systems which have completed the design and development cycles and are being deployed were handed over to the services.

Among the systems handed over was BOSS. An all-weather electronic surveillance system successfully designed and developed by Instruments Research & Development Establishment (IRDE), Dehradun. The system has been deployed at Ladakh border area for day and night surveillance.The system facilitates monitoring and surveillance by automatically detecting the intrusions in harsh high-altitude sub-zero temperature areas with remote operation capability. The system is being produced by Bharat Electronics Limited (BEL), Machlipatnam.

The ASTRA Mk-I is the indigenously developed first Beyond Visual Range (BVR) Missile, which can be launched from Sukhoi-30, Light Combat Aircraft (LCA), Mig-29 and Mig-29K. Globally, very few countries have expertise and capabilities to design and produce this class of weapon system. Successful development of ASTRA weapon system by Defence Research & Development Laboratory (DRDL) Hyderabad & production by Bharat Dynamics Limited (BDL), Hyderabad is a major contribution towards ‘Atmanirbhar Bharat’.

Secretary, DDR&D & Chairman DRDO Dr G Satheesh Reddy stated that DRDO is committed to the development of advanced systems and technologies for Defence. He added that DRDO strives to create robust ecosystem of Defense design, development and production along with academia, industry and armed forces.

Several senior functionaries from Ministry of Defence and Government of India were present at the function.