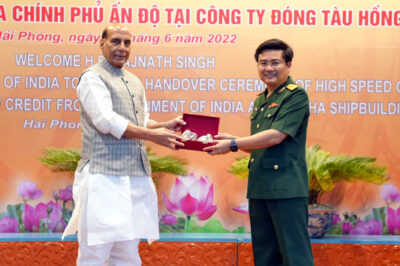 Raksha Mantri Shri Rajnath Singh handed over 12 High-Speed Guard Boats to Vietnam during his visit to Hong Ha Shipyard in Hai Phong on June 09, 2022. The boats have been constructed under the Government of India’s $US 100 million Defence Line of Credit to Vietnam. The initial five boats were built in the Larsen & Toubro (L&T) Shipyard in India and the other seven in Hong Ha Shipyard. Senior civil and military officials of India and Vietnam were present during the handing-over ceremony.

In his address, Raksha Mantri described the project as a glowing example of ‘Make in India, Make for the World’ as envisioned by Prime Minister Shri Narendra Modi. He said, the successful completion of the project, despite the challenges due to the Covid-19 pandemic, is a testimonial to the commitment and professional excellence of the Indian defence manufacturing sector as also of Hong Ha Shipyard. He exuded confidence that the project will be a precursor to many more cooperative defence projects between India and Vietnam in future.

Shri Rajnath Singh invited Vietnam to become a part of India’s defence industrial transformation through enhanced cooperation. He asserted that the Indian defence industry has substantially increased its capabilities under the ‘Aatmanirbhar Bharat’ vision of the Prime Minister. He stressed that the objective is to build a domestic industry in order to make India a defence manufacturing hub that not only caters to domestic needs but also fulfils international requirements.

The Raksha Mantri is on a three-day official visit to Vietnam. On the first day of engagements in Hanoi on June 08, 2022, Shri Rajnath Singh held bilateral talks with Vietnam’s Minister of National Defence General Phan Van Giang. Both sides signed a ‘Joint Vision Statement on India-Vietnam Defence Partnership towards 2030’ to enhance defence cooperation. An MoU to simplify procedures for mutually beneficial logistic support was also inked between the two countries. The Raksha Mantri also called on President of Vietnam Mr Nguyen Xuan Phuc and Prime Minister Mr Pham Minh Chinh.