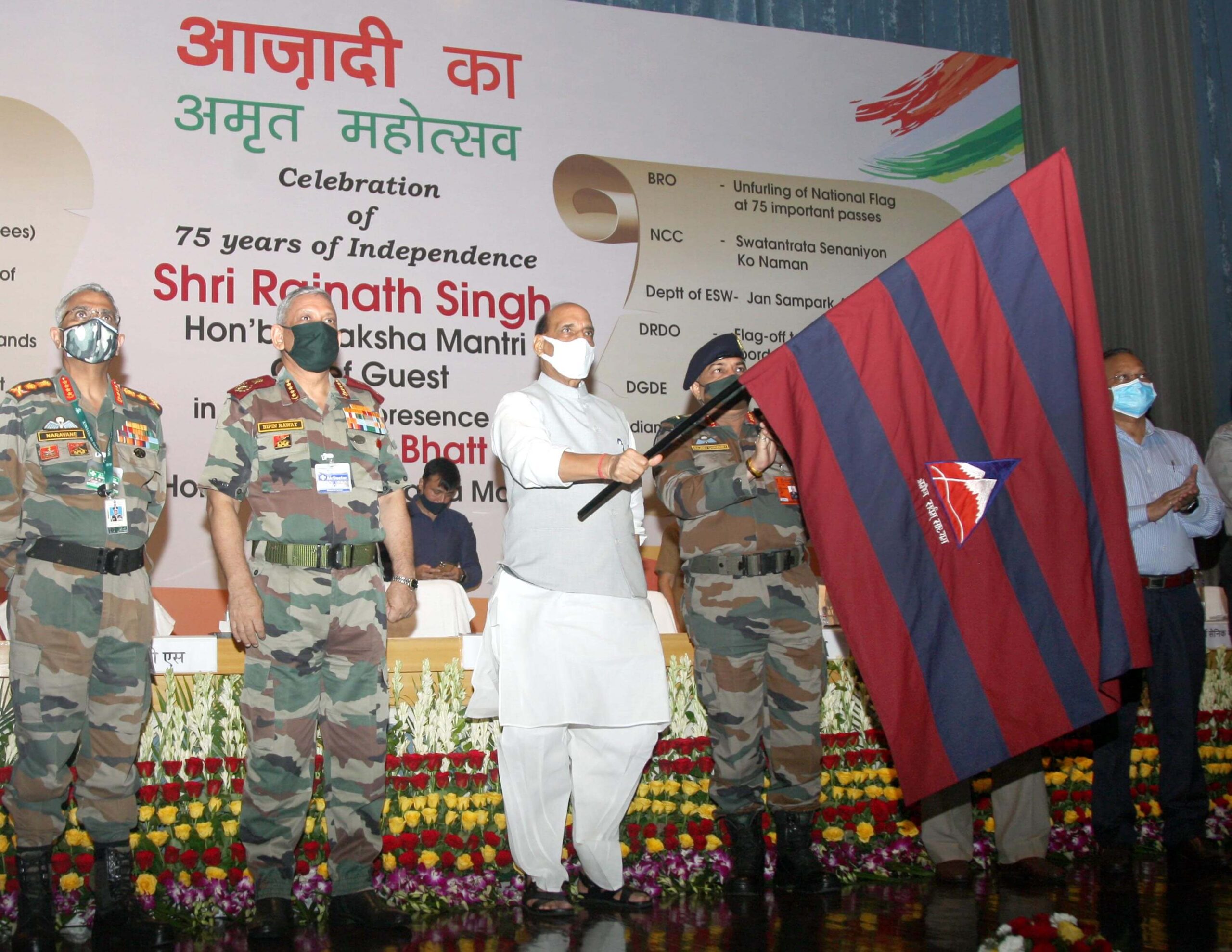 Raksha Mantri Shri Rajnath Singh virtually launched from New Delhi on August 13 a series of major events, organised by the Armed Forces & various other organisations of Ministry of Defence, to mark the 75th anniversary of India’s Independence, being celebrated as ‘Azadi Ka Amrit Mahotsav’. Addressing the gathering, Shri Rajnath Singh congratulated the Ministry & the Armed Forces for organising various events across the country which will instill a sense of national pride among the people. He stated that events represent the Indian ethos of ‘unity in diversity’.

Shri Rajnath Singh paid homage to all the bravehearts who laid down their lives and defended the sovereignty & integrity of the country. Remembering Captain Vikram Batra who made the supreme sacrifice during the Kargil war, the Raksha Mantri said the bravery and deep-rooted passion of the gallant heroes will always be an inspiration for generations to come.

The Raksha Mantri also threw light on the five pillars (Freedom Struggle, Ideas at 75, Achievements at 75, Actions at 75 and Resolves at 75) envisioned by Prime Minister Shri Narendra Modi when he had kicked off the ‘Azadi Ka Amrit Mahotsav’ celebrations in March 2021. He stated that the five pillars will act as a guiding force for the country to move forward in the path of development.

Echoing the Government’s resolve, Shri Rajnath Singh stated “we aim to develop a powerful & self-reliant Bharat which is peace-loving but fully capable of giving a befitting reply whenever challenged”. He assured the nation that the Armed Forces are fully equipped to deal with any challenge that endangers the safety, security, unity and integrity of the nation. He said the decisions aimed to promote jointness among the Armed Forces will play a pivotal role in bolstering the security infrastructure of the country.

Reiterating the Government’s action plan to make India ‘AatmaNirbhar’, the Raksha Mantri said no stone is being left unturned to make the country self-reliant in defence manufacturing. He said the country’s dependency on imports has decreased considerably due to measures taken by the Government, including notifying two positive indigenisation lists to promote self-reliance and defence exports. He also made special mention of Indigenous Aircraft Carrier (IAC) Vikrant, the first aircraft carrier to be built in India, saying that it was a moment of immense pride for the entire nation when the aircraft carrier undertook its maiden sea voyage recently.

Shri Rajnath Singh lauded the Armed Forces and different organisations of the Ministry of Defence for providing continuous support to the civil administration in the fight against COVID-19. He highlighted the crucial role played by Defence Research and Development Organisation (DRDO) in setting up COVID care hospitals across the country and developing anti-COVID drug ‘2-DG’. He also commended the Armed Forces for providing logistic support to civil authorities to meet the oxygen requirement.

The Raksha Mantri also congratulated the Indian contingent for its excellent performance in the recently concluded Tokyo Olympics, especially Subedar Neeraj Chopra who bagged India’s only Gold of the Games in Javelin Throw.

Speaking on the occasion, Chief of Defence Staff General Bipin Rawat remembered Mahatma Gandhi and Netaji Subhas Chandra Bose for their leadership role in India’s Independence movement. Saying that the Armed Forces are ready to deal with any challenge, he stated that the efforts taken to increase jointness among the forces will enhance their capabilities.

In his welcome address, Defence Secretary Dr Ajay Kumar gave a brief overview of the various events launched on the occasion, saying that these are aimed at inculcating a sense of patriotism among the people on the 75th anniversary of Independence Day.

The events inaugurated by the Raksha Mantri are as follows: