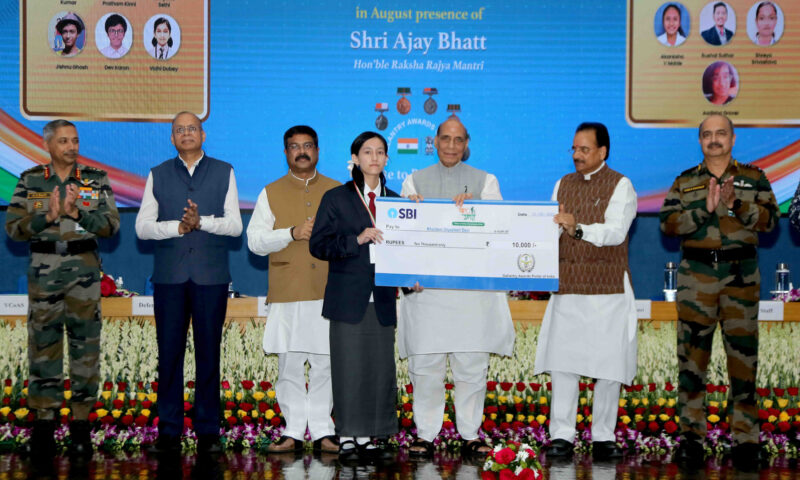 Raksha Mantri Shri Rajnath Singh felicitated 25 winners of the ‘Veer Gatha’ contest (SUPER-25) in New Delhi on August 12, 2022. Veer Gatha, one of the unique projects launched as a part of ‘Azadi Ka Amrit Mahotsav’, was organised to inspire & spread the awareness among children about the gallant deeds and sacrifices of the Armed Forces. In the nation-wide contest, held between October 21-November 20, 2021, over 8.04 lakh students from 4,788 schools were encouraged to share inspirational stories through essays, poems, drawings and multimedia presentations. After several rounds of evaluation, 25 students were selected and declared as ‘SUPER-25’.

In the run up to the Independence Day 2022 celebrations, Shri Rajnath Singh today felicitated these SUPER-25 students with a cash prize of Rs 10,000/- each, a medal and a certificate, in the presence of Education Minister Shri Dharmendra Pradhan and Raksha Rajya Mantri Shri Ajay Bhatt. Chief of the Air Staff Air Chief Marshal VR Chaudhari, Chief of the Naval Staff Admiral R Hari Kumar, Defence Secretary Dr Ajay Kumar and Vice Chief of Army Staff Lt Gen BS Raju were also present. 300 NCC cadets and students from Army Public Schools & Cantonment Boards were in attendance, with students and teachers from over 400 schools participating virtually.

Congratulating the ‘SUPER-25’, the Raksha Mantri commended their creativity, zeal & enthusiasm and said that their entries for the contest beautifully captured the courage and sacrifices of freedom fighters such as Bhagat Singh, Chandrashekhar Azad & Khudiram Bose and Gallantry award winners like Major Somnath Sharma, Subedar Sanjay Kumar, Sepoy (Honorary Captain) Baba Harbhajan Singh, Havildar Veer Abdul Hameed, Captain Vikram Batra, Captain Manoj Pandey, Major Sandeep Unnikrishnan & Col Santosh Babu, besides Col Mitali Madhumita, the first woman officer in the Indian Army to receive a gallantry award. “These fearless freedom fighters and Armed Forces personnel, who have served their motherland, come from different parts of the country and belong to different religions. But, one thing that is common among them is their love for India. They are bound by the common thread of patriotism,” he said.

Shri Rajnath Singh added that the same feeling of patriotism is common in all the children, and not just the SUPER-25, who despite being from different religions and places, whole-heartedly participated in the ‘Veer Gatha’ contest and made it a grand success. The overwhelming response to the competition is a testament to the fact that the country’s bravehearts and their inspiring stories will forever remain engraved in the hearts of every Indian and motivate the younger generation to contribute to Nation Building, he said.

The Raksha Mantri cited the examples of Father of the Nation Mahatma Gandhi, founder of Maratha empire Chhatrapati Shivaji, freedom fighters like Bhagat Singh & Ashfaqulla Khan, and former Prime Minister Lal Bahadur Shastri, urging the students to take inspiration from the lives of these eminent personalities. He exhorted the students to understand, through the stories of these personalities, the importance of striking a balance between bravery and wisdom.

Shri Rajnath Singh called upon the children to move towards their goals in unison with the right intention and without the fear of facing failures or setbacks. “No defeat is final until we stop trying,” he said, emphasising on the need to learn from the past and create a new path in the future.

Thanking the Raksha Mantri for initiating the ‘Veer Gatha’ project, Shri Dharmendra Pradhan, in his address, said there can be no better celebration of ‘Azadi Ka Amrit Mahotsav’ than honoring India’s bravehearts. He added that the project has brought out young India’s patriotism and respect for the Bravehearts in the most creative ways. He assured that the Education Ministry will soon develop an institutional mechanism for awarding academic credits for certificates received under this initiative.

The Education Minister further said that to strengthen the sense of ‘responsibility towards the nation’ from an early age, Education Ministry in consultation with Defence Ministry will work to include the valour of soldiers and India’s Veer Gatha in the last 75 years into the school curriculum and textbooks. He suggested renaming the contest to ‘Sena Super 25’ in the honor of the soldiers.

On the occasion, Subedar Major (Honorary Captain) Yogendra Yadav narrated his real-life story of the Kargil war where he overcame all odds and played a central role in capturing Tiger Hill, which was one of the turning points in India’s historic victory. He encouraged the children to take inspiration from the courageous soldiers who selflessly serve the motherland without caring for personal safety.