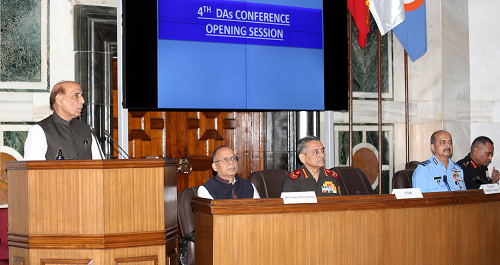 Raksha Mantri Shri Rajnath Singh stated that defence  attachés (DA) are  the bridge between India and Friendly Foreign Countries for mutual defence cooperation, urging them   to promote Indian defence production capabilities under Aatmnirbhar Bharat and understand the technological innovations taking place in Indian Defence Production Sector, both Public and Private so as to showcase and promote these in their countries of accreditation. He was deliveirng inaugural address at the two-day 4th DAs Conference being held in New Delhi on 13th October, 2022.

Appreciating   the performance of the  DA, Raksha Mantri said that defence attachés make a significant contribution in securing national interests in line with foreign policy; strengthening international cooperation and enhancing the capabilities & preparedness of the Armed Forces. He urged them to carry forward the Government’s vision of achieving self-reliance, describing it as the only way to make India strong and respected at the global stage, amid the constantly-evolving global security scenario. He, however, maintained that ‘Aatmanirbharta’ does not mean isolation from the rest of the world, but ensuring national security and strategic autonomy through a modern military.

Asserting that India cannot and should not rely on imports, Shri Rajnath Singh reaffirmed the Government’s commitment to achieve self-reliance in defence manufacturing to remain prepared to deal with future security challenges. He termed defence attachés as the forerunners of ‘Aatmanirbharta’ in defence.

The Raksha Mantri listed out the steps taken by Ministry of Defence to attain self-reliance, including encouraging private sector participation; issuance of positive indigenisation lists; setting up of defence corridors in Uttar Pradesh & Tamil Nadu; rolling out of new production & export policies; promoting innovation and increasing FDI limit. He said, the defence attachés can bring investment in India by raising awareness about these decisions in different countries. Describing them as a bridge, he stressed that defence attachés can liaison with their respective countries and help in fulfilling the needs of both sides.

“India is manufacturing world class and cost-effective weapons, equipment & platforms, which are being internationally recognised. Our defense products are not only world class and reliable in quality but also relatively economical.,” said Shri Rajnath Singh.

Two days’ conference will have different briefing sessions wherein chief of services, Foreign Secretary, and other dignitaries from Ministry of Defence will address the DAs on various diplomatic, strategic and functional issues pertaining to defence cooperation.

After this conclave the DAs will also accompany the delegations from the Freindly Foreign Countries attending the DefExpo-22 which is starting from 17th October at Gandhinagar Gujarat,.