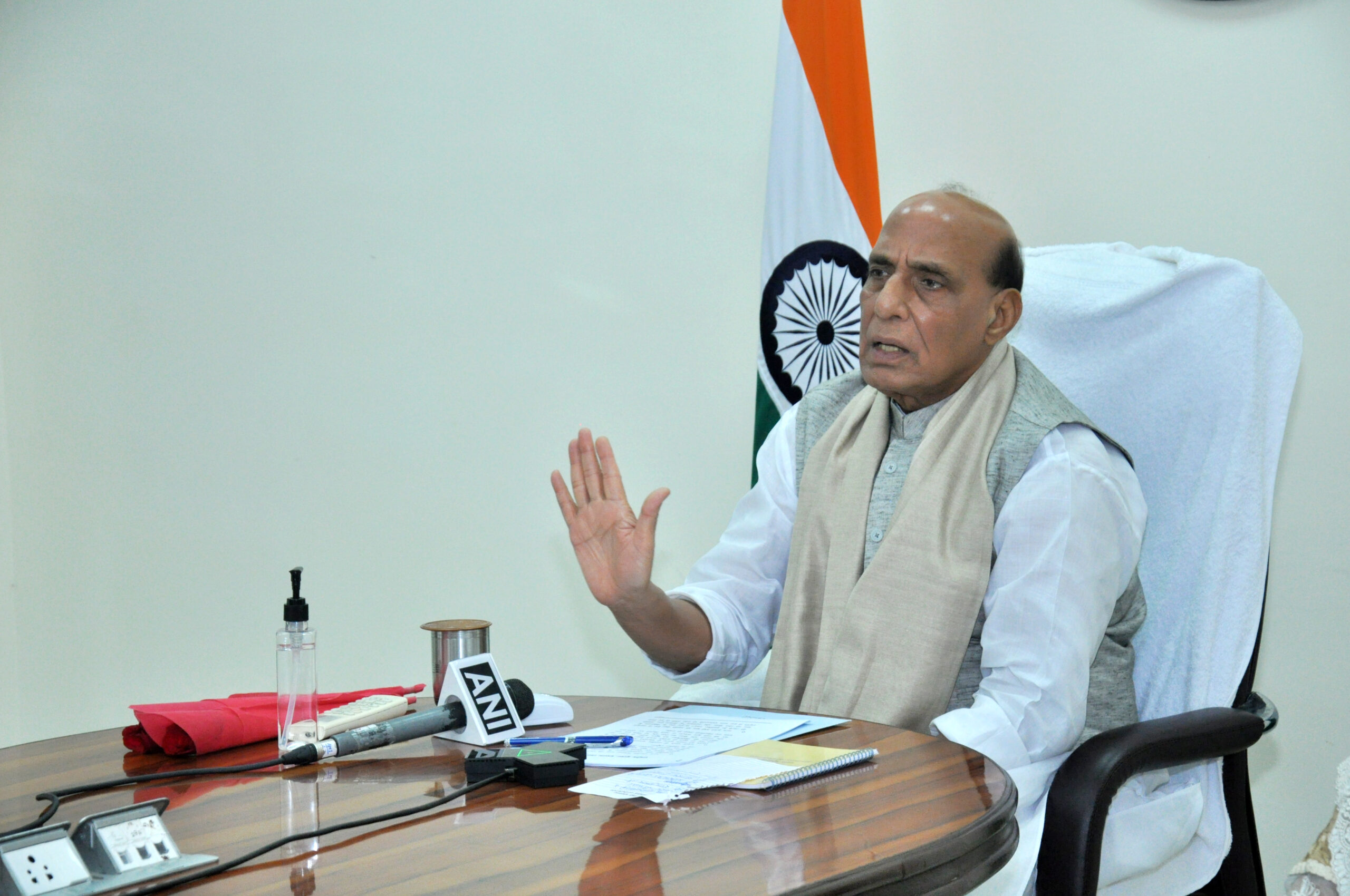 Raksha Mantri Shri Rajnath Singh delivered a lecture on ‘National Security’ as part of late Balramji Das Tandon lecture series through video conferencing on August 30, 2021. The Raksha Mantri defined national security as a strong belief to remain vigilant and prepared to deal with every threat & challenge that endangers the existence, development and interests of the Nation, stressing that being sensitive towards national security is the topmost priority of every Government.

Shri Rajnath Singh recalled the challenges by India on its land and maritime boundaries in the last 75 years and lauded the Armed Forces for facing & overcoming every challenge that threatened national security. “Ever since Independence, there has been a constant attempt by some anti-India forces to create an atmosphere of instability within the country. When they realised that they cannot fight with us in front-wars, they resorted to a proxy war. They began to train and finance terrorists to target India,” he said. 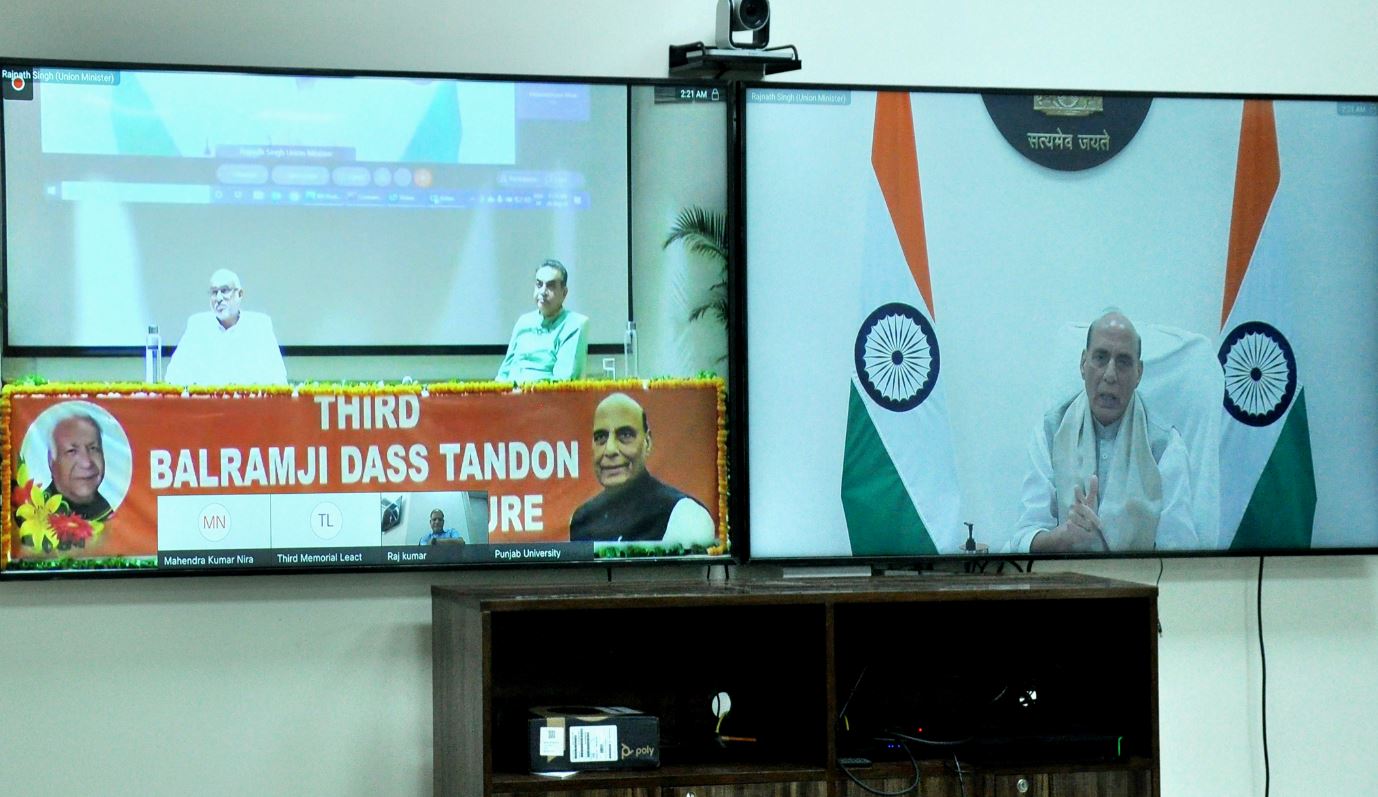 Commending the Armed Forces for their ongoing efforts to counter terror activities in Jammu & Kashmir for the last seven years, the Raksha Mantri exuded confidence that the Union Territory will soon be free of terrorism. “The strength that separatist forces used to get due to Article 370 and 35A is now nowhere to be seen,” he added.

Shri Rajnath Singh termed “increased morale of the security forces and their changed modus operandi” as a major change in the response against terrorism in the last seven years. Stressing that the Government does not believe in politicising issues related to national security, he said there is now a belief in the Armed Forces that they can perform their duty in the service of the nation with no interference of any kind. “There hasn’t been a major terrorist incident in the hinterland of India in the last seven years. This shows the increased morale and confidence of our Armed Forces,” he said.

Referring to the cross-border strikes on terror camps, the Raksha Mantri said there will be no comprise on national security. He said the model of terrorism adopted by the evil forces is slowly collapsing. “The anti-India forces have understood that they are no longer in a position to do much in the Kashmir Valley, especially after the abrogation of Article 370. I want to assure you that no power in the world can separate Jammu & Kashmir from India,” he stated.

On ceasefire violations, Shri Rajnath Singh said the Armed Forces have always given a befitting reply that shows their alertness and bravery. He assured the Nation that the Armed Forces are vigilant at all times to safeguard the interests of the Nation and ensure the safety & security of its people.

The Raksha Mantri said, the Government is closely watching the recent developments in Afghanistan which have posed new security challenges. “Security of Indians is a cause of concern of the Government. We also do not want that anti-India forces take advantage of the evolving Afghan situation for cross-border terrorism,” he added.

Referring to the 2020 Galwan Valley incident, the Raksha Mantri said, the Armed Forces are very well aware that any unilateral action should not be ignored. He commended the Indian Army for dealing the situation at Northern border with bravery and restraint. Paying tributes to the Indian soldiers who laid down their lives, he said the Nation will never forget the supreme sacrifice made by the Armed Forces for their motherland. Shri Rajnath Singh maintained that any border dispute can only be resolved peacefully and through dialogue. He, however, assured the Nation that the Government, under the leadership of Prime Minister Shri Narendra Modi, will never compromise when it comes to India’s borders, its honor and self-respect.

Identifying strengthening of border infrastructure as a crucial element for national security, Shri Rajnath Singh said Border Roads Organisation (BRO) is leaving no stone unturned to build roads, bridges and other infrastructure projects in border areas. He listed out some of the projects completed by BRO including Atal Tunnel and added that Ladakh is being given all weather connectivity and work has started on many alternative roads. “These projects are beneficial for the people residing in border areas. They are also our strategic assets. Keeping their interests in mind, it is necessary to strengthen the border infrastructure,” he added. The Raksha Mantri also touched upon the infrastructure projects in North East, saying that he recently inaugurated 12 roads in North East and 63 bridges in Ladakh, terming it as an important part of National Security Grid.

Shri Rajnath Singh stated the Armed Forces are fully capable of protecting the borders & the sea and Government is providing all possible support to them. “It is our priority to equip our Armed Forces with modern technology and weaponry so that they become one of the strongest and most modern militaries in the world,” he emphasised. The Raksha Mantri said while the induction of fighter aircraft like Rafale has strengthened the firepower of the Indian Air Force and increased the capability to respond to any challenge, the Government’s aim is to reduce dependence on imports and make India self-reliant in every field. “The dream of Prime Minister Shri Narendra Modi is ‘AatmaNirbhar Bharat. We want to ‘Make in India and ‘Make for the World’. This is our resolve for self-reliance,” he added.

The Raksha Mantri listed out a number of reforms undertaken by the Government to achieve self-reliance in defence and make India a global manufacturing hub. The reforms include appointment of Chief of Defence Staff, creation of Department of Military Affairs and notifying two Positive Indigenisation Lists to promote exports. “We are working towards creating Theater Commands in a new way. This is also going to be a revolutionary step in itself,” he added.

The Raksha Mantri reiterated the Government’s commitment towards unity, integrity & security of the country at every front, from external and internal security to the task of protecting and strengthening India’s strategic interests on the diplomatic front. “Work is being carried out on a large scale for our national security. We will ensure that the nefarious intentions of anti-India forces do not even touch the people of the country,” he stressed. Shri Rajnath Singh added that new threats to national security have emerged due to the development of modern technology. The Government is making all efforts to continuously update and upgrade the national security system to deal with such challenges, he said.