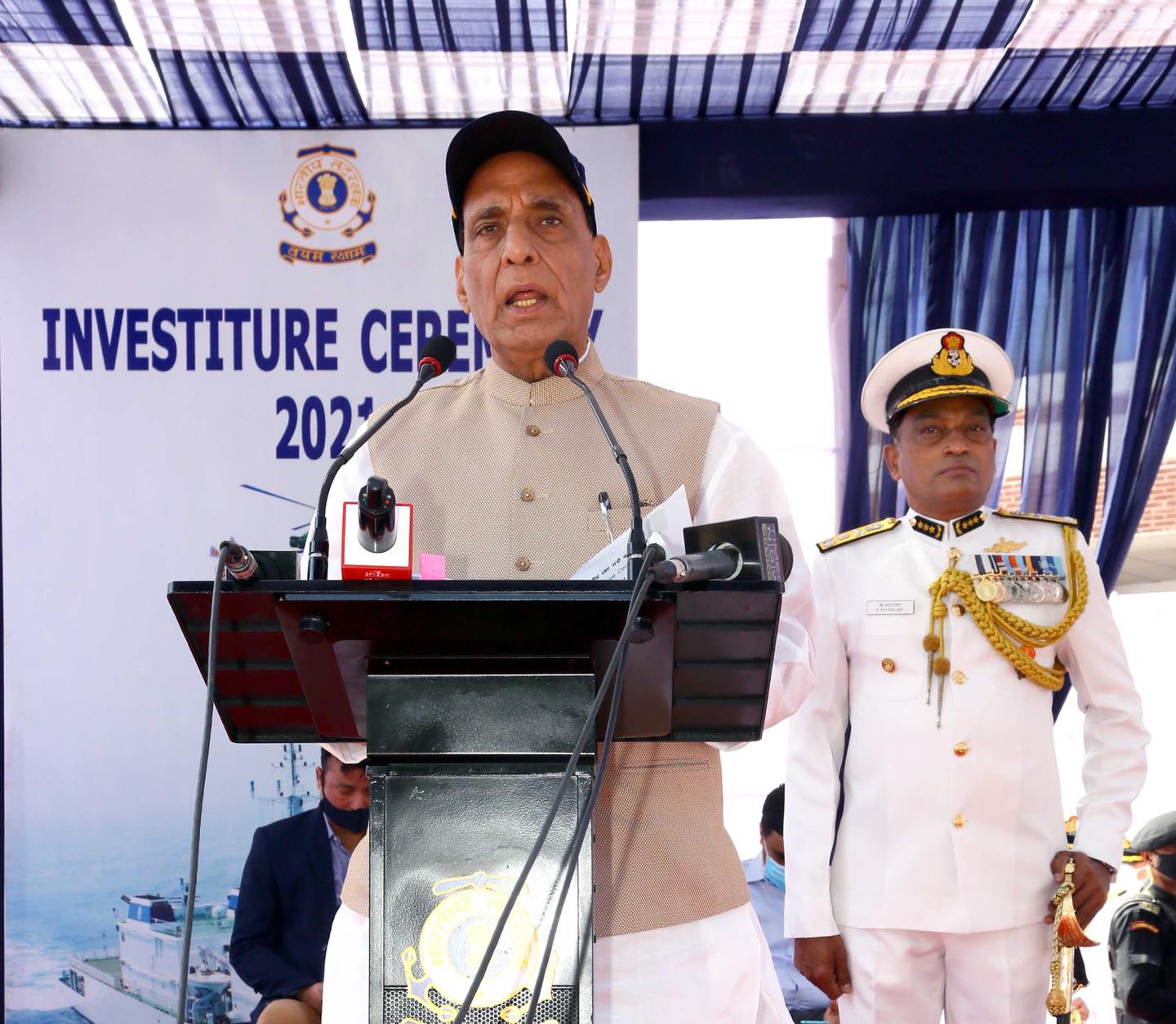 Raksha Mantri Shri Rajnath Singh conferred gallantry and meritorious service medals on the Indian Coast Guard (ICG) personnel at an investiture ceremony held in New Delhi on October 09, 2021. A total of 21 awards, including three President’s Tatrakshak Medals (Distinguished Service), eight Tatrakshak Medals (Gallantry) and 10 Tatrakshak Medals (Meritorious Service) were presented during the ceremony. The awarding of medals was in recognition of the selfless devotion, exemplary courage and acts of valour of the ICG personnel under extreme conditions.

Speaking on the occasion, Shri Rajnath Singh extended his best wishes to the winners and exuded confidence that these awards & medals would not only boost the morale of the awardees, but inspire other ICG personnel to give their best to safeguard the interests of the nation. He lauded the efforts of ICG in maintaining the safety of the maritime frontiers and securing vast coastline of the country. 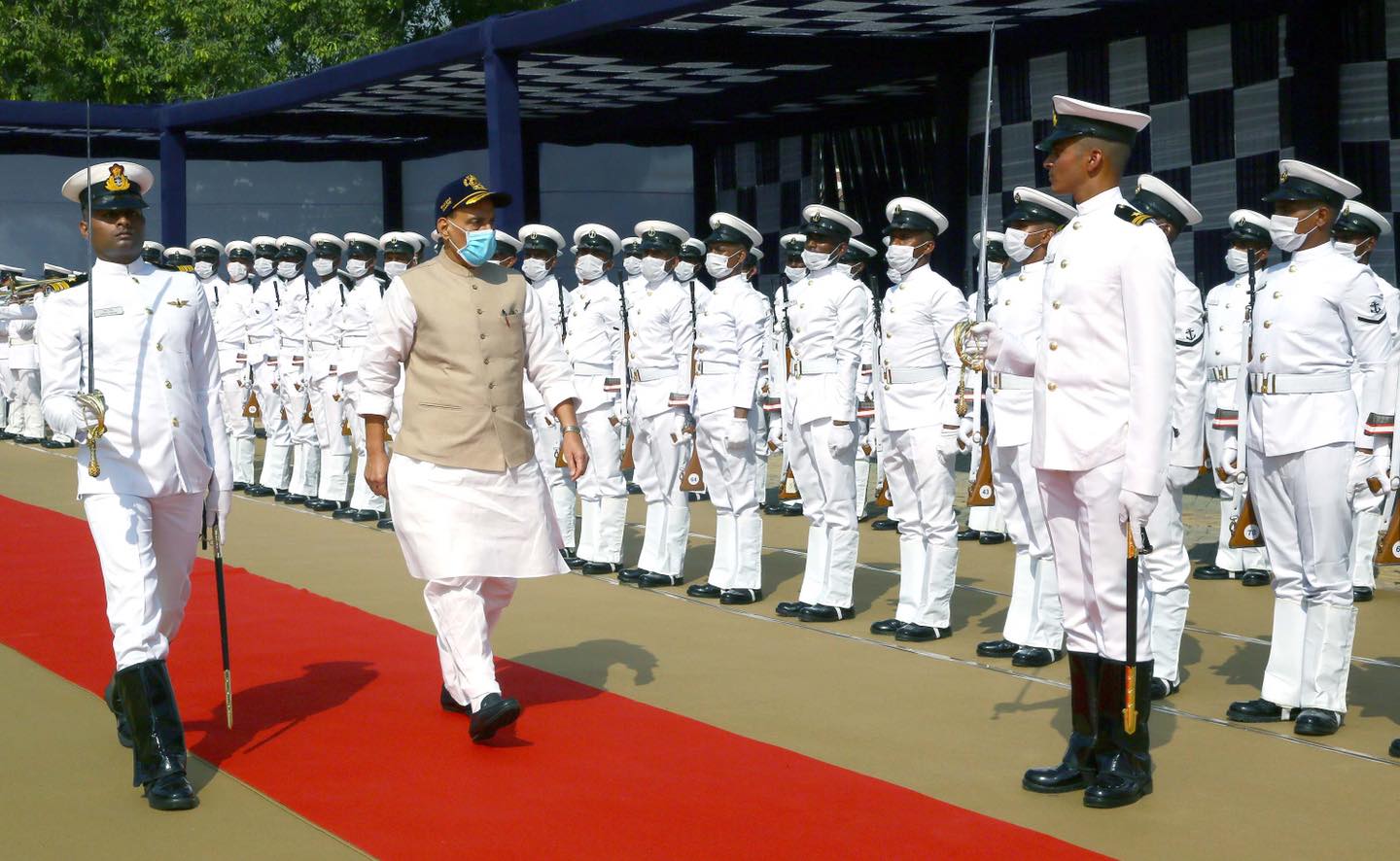 Commending their energy & dedication, the Raksha Mantri said, the ICG, which began their service to the nation with just 4-6 boats, is now one of the best maritime forces in the world with over 150 ships and 66 aircraft. This ever-growing stature, he said, instills confidence among the people that the national maritime interests are under safe supervision.

Stressing that India’s culture, literature, trade & economy are closely linked with the sea, Shri Rajnath Singh pointed out that along with prospects of prosperity, the sea also posed various security challenges. He voiced the Government’s resolve of bolstering the country’s maritime security, terming it a crucial aspect of comprehensive internal & external security framework. “India’s maritime zones must be safe, secure and pollution free. This will fulfil our security needs and ensure environmental health & economic development,” he said.

The Raksha Mantri termed ‘unhindered maritime activity’ as a necessity to move ahead on the path of rapid development. He stated that India is a rising maritime power and its prosperity is largely dependent on the sea. Referring to Prime Minister Shri Narendra Modi’s vision of ‘SAGAR’, i.e. ‘Security and Growth for All in the Region’, he lauded the ICG for being at the forefront in achieving that goal by promoting regional cooperation, maintaining maritime peace in the Indian Ocean Region (IOR) and working closely with international maritime agencies.

Shri Rajnath Singh also praised the ICG for its gallant acts of providing aid to the neighbouring countries whenever needed. He made special mention of the fire-fighting and pollution response operations of the ICG – Sagar Raksha-I’ and Sagar Raksha-‘II’ – which played a significant role in dousing the blaze onboard large crude oil carrier ‘New Diamond’ and container vessel ‘Express Pearl’ off the coast of Sri Lanka recently. These timely and courageous acts averted major devastation in the IOR and have positioned India as a responsible and capable maritime power, he said.

The Raksha Mantri recalled the commendable role played by ICG in saving precious lives during the recent cyclones ‘Tauktae’ and ‘Yaas’. He also praised ICG for their operations against illegal weapons and narcotics trafficking, saying that the ‘Sentinels of the Sea’ are not only tackling the challenges of the present, but also working to secure and strengthen the country’s future.

In the last one year, ICG carried out 70 medical evacuations, conducted 555 search and rescue operations and saved the lives of more than 1,090 people.

Director General ICG Shri K Natarajan and senior officers of Ministry of Defence and Indian Coast Guard were present on the occasion.

Following the Investiture ceremony, Raksha Mantri also addressed the 38th Coast Guard Commanders’ Conference. The Conference is an annual meet which is attended by all the senior officers of the ICG and Ministry of Defence. A brief on recent operational and administrative developments in Indian Coast Guard was presented to the Raksha Mantri. A wide range of issues pertaining to strengthening of the ICG as well as legitimate legal use of oceans will be discussed during the three-day Conference.