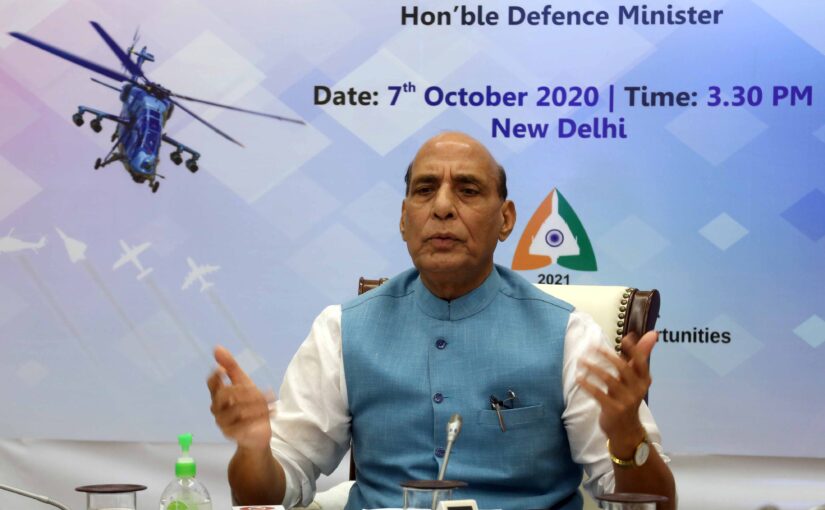 Invites the World to India for Asia’s Largest Aero show

Department of Defence Production, Ministry of Defence organised the Ambassadors’ Round Table Virtual conference on Aero India 2021, chaired by Raksha Mantri Shri Rajnath Singh here today. The major reach-out effort of the Ministry was well attended by 200+ invitees comprising Ambassadors, Heads of Missions and Defence Attaches of over 75 countries indicating the growing stature of the 13th mega biennial event, to be held in Karnataka’s capital Bengaluru from February 3-7, 2021. The  senior representatives of foreign missions at New Delhi were briefed about the Aero India-21well in advance with a view to encourage the presence of their leaders and senior most decision makers at the event in February 2021 wherein India’s Aerospace and Defence manufacturing capabilities will be displayed under one umbrella.

Addressing the conference, Raksha Mantri said, Aero India-21aligns with India’s vision to be among the top five countries of the world in defence and aerospace industries, with active participation of public and private sector fulfilling the objective of Self-Reliance as well as requirements of other friendly countries. Shri Rajnath Singh stated that “Aatmanirbhar Bharat was the centerpiece of Prime Minister Narendra Modi’s vision and towards this, Ministry of Defence has announced numerous government reforms such as increase in FDI to 74% through automatic route, the Defence Acquisition Procedure -2020, revised Offset guidelines to promote Investment in India for co-development and co-production as also formulated the draft Defence Production and Export Promotion Policy 2020 (DPEPP 2020)during the preceding pandemic months to steer the vision as also for ease of business”.

Shri Rajnath Singh added that India’s Aerospace and defence sector has matured and is exploring mutually beneficial partnerships with friendly countries to set up manufacturing industries in India and defence equipment produced in India to be exported abroad. He further stated that “Aero India-21 will showcase Government’s intent to achieve a turnover of USD 25 billion with exports of USD 5 billion in aerospace and defence goods and services by 2025”.

The representatives from across the world were briefed that Aero India-21 will be a business oriented event and will be compliant to the COVID-19 stipulations. The event has received tremendous interest since the launch of the event website by the Defence Minister on 11 Sep 2020 and more than 90%of space has been booked reflecting the tremendous interest shown by exhibitors to participate in the aero show. The fine tuning of the business events and seminars are being planned and over 500 exhibitors are expected at Asia’s Largest Aeroshow.

Raksha Mantri also urged the Ambassadors to impress upon their leadership and Industry captains of their respective countries and defence industries to participate in Aero India-21 in a big way so as to “dive deep into the strategic and business opportunities available in India with the aim of establishing strategic partnerships”. Shri Rajnath Singh also released the official Aero India 2021 inaugural film on the occasion.

The theme of the event ‘The runway to a billion opportunities’, encompasses the gamut of Aerospace and Defence manufacturing including opportunities in the civil aerospace domain. The Defence Minister expressed confidence that Aero India-21 will demonstrate India’s ability to take the lead and further build on our strengths in the post COVID world.

Department of Defence Production gave a detailed presentation on all aspects of Aero India-21 and built in assurances to be compliant with COVID-19 stipulations. The Government of Karnataka also gave a presentation informing the participants about the preparedness of the state to conduct the show in a controlled and safe environment.

Chief Minister of Karnataka, Shri BS Yediyurappa also addressed the distinguished audience and assured them that Government of Karnataka would make all necessary preparations towards safe conduct of the Aero India-21 in February 2021 at Bengaluru keeping in mind the safety of the participants and in compliance with the COVID-19 protocols.

Raksha Rajya Mantri Shri Shripad Yesso Naik; Secretary (Defence Production) Shri Raj Kumar also addressed the gathering and echoed the resolve of the Ministry of Defence to steer the indigenous defence industry as one of the pillars of Atmanirbhar Bharat and invited the Foreign delegates to Aero India-21.