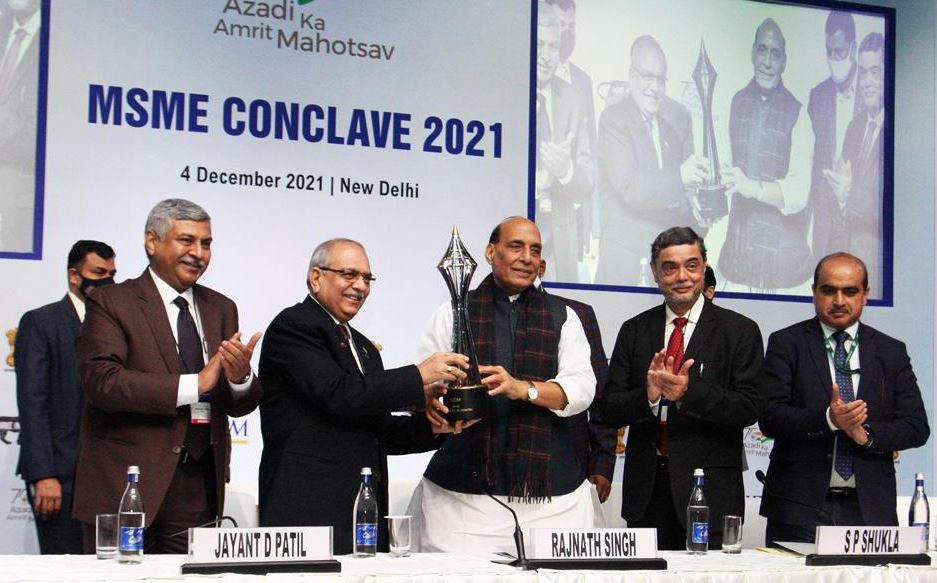 Raksha Mantri Shri Rajnath Singh has called upon Micro, Small and Medium Enterprises (MSMEs) to invest more in research & development and manufacture new products & technologies and thereby contribute to the security and progress of the country. He was delivering the inaugural address at the MSME Conclave, organised by Department of Defence Production, Ministry of Defence in partnership with Society of Indian Defence Manufacturers (SIDM) in hybrid mode, in New Delhi on December 04, 2021. Shri Rajnath Singh urged MSMEs and SIDM to create an industrial base in India, on the lines of ‘Mittelstand’ (Mittel-Stunt) of Germany, which has been recognised by the whole world for manufacturing metal equipment.

Shri Rajnath Singh stated that the Government is according top priority to self-reliance in defence, in view of the ever-changing security scenario, adding that there is a need to move forward to unleash the full potential of MSMEs in the sector. He exuded confidence that Indian manufacturers and their associated MSMEs will play a major role in catering to the defence needs of the country and also meet the global requirement.

On the important role being played by MSMEs to realise Prime Minister Shri Narendra Modi’s vision of ‘Aatmanirbhar Bharat’, the Raksha Mantri said, major industries play a big role in national security and economic development by manufacturing tanks, submarines, aircraft & helicopters, however, hidden behind these big platforms are small industries. In this era of outsourcing, huge platforms are assembled by thousands of components provided by these hidden MSMEs, he stated. Shri Rajnath Singh added that the MSMEs are not only supporting large entities by manufacturing quality products at sub-systems & component level, but are also generating direct and indirect employment for the people. Saying that large industries & MSMEs complement each other and together can bolster the security & economy of the country, he extended the full support of the Government in achieving this objective.

Shri Rajnath Singh described MSMEs as the backbone of the industry which is equally responsible for not only economic activities but also social development. “Today, there is a sizeable number of MSMEs in our country, which contribute 29 per cent to our GDP through their national and international trade. After the agriculture sector, it is the biggest source of providing employment to about 100 million people. MSMEs also work to involve innovators and mediators in large enterprises. They help to fulfill the objectives of large industrial entities by becoming an important part of the value chain and supply chain,” he added.

The Raksha Mantri pointed out that, as compared to large entities, the concentration of wealth by MSMEs is less and its distribution is dispersed, which helps in reducing economic inequality. MSMEs can definitely play a big role in empowering the youth of the country financially and fulfilling their dreams, he said.

“We brought policies related to banking and capital market so that our MSMEs can get maximum capital easily and at cheap rates. We came out with the policy of value chain integration and establishment of common facilities, industrial parks and two defence industrial corridors to reduce the fixed cost of MSMEs,” Shri Rajnath Singh said while voicing the Government’s commitment to tap the full potential of MSMEs. He listed out some of the initiatives which aim to promote indigenous design, development and manufacturing of defence and aerospace equipment in the country under ‘Make in India’ by harnessing the capabilities of public and private sector especially MSMEs. “We have an estimated Rs 85,000 crore industry of aerospace and defence. The contribution of the private sector in this has increased to Rs 18,000 crore. Our vision to make India a global defence manufacturing hub,” he said.

The steps taken to encourage MSMEs include issuance of Request for Proposal (RFP) to MSMEs without any financial condition in cases of procurement where the estimated cost does not exceed Rs 100 crore/year or the total value is less than Rs 150 crore, whichever is higher; earmarking of projects under Make categories, procurement of which does not exceed Rs 100 crore/year based on the delivery schedule at the time of Acceptance of Necessity (AoN) demand and revised Offset Policy 2020 where the Indian offset partner is an MSME.

Shri Rajnath Singh added that projects under Innovation for Defence Excellence (iDEX) and Technology development Fund (TDF) scheme are mainly reserved for startups and MSMEs. “These schemes extend financial assistance for development of defence technology and hand-holding by user services, thus providing necessary impetus to MSMEs, startups and individual innovators. They are being funded with financial grants to provide innovative solutions to the problem statements prepared by the Services and new technologies like Artificial Intelligence, Data Analytics and Robotics can be used,” he said.

The Raksha Mantri also mentioned about Ministry of Defence’s approval of a central sector scheme for iDEX with a budgetary support of about Rs 500 crore for the next five years from 2021-22 to 2025-26. The scheme will provide financial assistance to around 300 start-ups/MSMEs/individual innovators and about 20 partner incubators through Defence Innovation Organisation (DIO). He further said that the Ministry has earmarked Rs 1,000 crore for procurement from iDEX start-ups during 2021-22 to promote the development of new defence technologies and support the growing start-ups base in the country. He appreciated the fact at present more than 30 projects are in progress under TDF and over Rs 150 crore outlay has been utilised.

Shri Rajnath Singh spoke about the ‘Dare to Dream’ innovation contest of Defence Research and Development Organisation (DRDO) which is a tribute to former President of India and eminent scientist Dr APJ Abdul Kalam. The contest enlists startups under the TDF scheme and provides them with financial and hand-holding support to develop cutting edge technologies & military products. He expressed confidence that the Indian industry will soon become a state-of-the-art technology provider not only for the Indian Armed Forces, but for the global market as well.

Reiterating the Government’s focus on encouraging exports, Shri Rajnath Singh hoped that India will soon become a net exporter from a net importer. “The government aims to achieve the export target of Rs 35,000 crore by 2024-25. Presently, India is exporting defence equipment to around 70 countries. According to Stockholm International Peace Research Institute 2020 report, India is in the list of top 25 countries in defence exports,” he said.

Shedding light on other steps like Srijan Portal, notification of positive indigenisation lists of 209 items and ‘Strategic Partnership Model’, the Raksha Mantri reiterated the Government’s resolve of ‘Make in India and Make for the World’. He stated that all these measures have resulted in an increase in the number of contracts being awarded to the indigenous defence industry. “From prioritising procurement of Indian/IDMM (Indigenously Designed, Developed and Manufactured) categories to supporting R&D, we are striving to harness technology through active collaboration with the industry, academia and technology providers, equipment manufacturers, quality controllers and users,” he said, commending the Armed Forces for their continued support to the Government’s efforts to achieve the objective of ‘Aatmanirbhar Bharat’ envisioned by Prime Minister Shri Narendra Modi.

Shri Rajnath Singh added that due to the reforms undertaken by the Government, the country’s defence exports crossed Rs 38,000 crore mark in the last seven years; 12,000 MSMEs joined the defence sector and there has been an increase in R&D, startups, innovation & employment opportunities. SIDM has now more than 500 members due to these policies, he said.

The Raksha Mantri lauded the SIDM for actively working with the Government to promote private sector participation in defence manufacturing, saying that it is playing an important role by informing the industries about the initiatives of the Government, apprising the Ministry of their views and providing valuable suggestions in new policies being made. He said, the growth and ever-expanding reach of SIDM reflect the growth of the Indian defence industry. He hoped that this Conclave would provide them with newer growth opportunities.

In his opening remarks, SIDM President Shri Jayant Patil affirmed SIDM’s commitment towards supporting the MSMEs and facilitating their growth. He looked forward to continue working proactively with Ministry of Defence to identify new opportunities for the MSMEs and integrating more with the sector.

The key objectives of the MSME Conclave are to unlock the potential of the non-defence sector MSMEs located in Tier II and Tier III cities across India by providing them with relevant information about the ‘Make in India’ programme in defence; to give a new impetus to the development of defence production in the country both for its domestic needs and also for exporting to friendly countries; to provide know-how to Indian MSMEs active in non-defence sectors for their entry into the defence sector; to familiarise them on various funding mechanisms established specifically for facilitating capable entrepreneurs low on capital or for capital intensive projects and to inform about the prospective market and business opportunities in Indian defence sector.

Currently in India, several thousand MSMEs are working in different sectors and are generally connected as Tiered Partners with various government establishments and large private sector OEMs. One of the key objectives of the ‘Make in India’ initiative is to bring MSMEs into the defence supply chain, thereby boosting self-reliance in defence and contributing in the defence exports market.

Senior officials of Ministry of Defence & SIDM and Industry representatives were present during the Conclave.