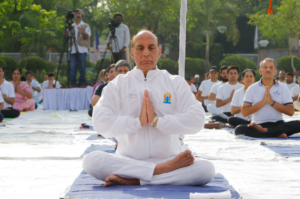 In his address, the Raksha Mantri described the age-old practice of Yoga as India’s greatest heritage which adds new energy to the lives of the people and connects them with one’s self & nature. “Yoga disciplines the mind and makes it healthy. It helps in performing duties efficiently. Yoga is not just a practice performed at a particular time, it is the reason behind the power & motivation to perform day-to-day tasks with efficiency and alertness. Yoga strengthens our thinking, knowledge, efficiency and dedication,” he said.

Shri Rajnath Singh defined Yoga as a pathway to counter various health ailments including diabetes, blood pressure, hypertension and depression as it eliminates inner conflict and stress. He threw light on the invaluable contribution of Yogasanas and Pranayama to boost immunity to fight the COVID-19 pandemic.

The Raksha Mantri cited Prime Minister Shri Narendra Modi’s address at the United Nations General Assembly (UNGA) in September 2014 when he called upon the international community to celebrate International Day of Yoga. He said, Yoga is the assurance of good health at zero cost. The Raksha Mantri appreciated the fact that the UNGA recognised Yoga as a practice which provides a holistic vision of health and well-being.

Shri Rajnath Singh lauded the Armed Forces, Indian Coast Guard, Defence Public Sector Undertakings and all departments of MoD for participating enthusiastically in the celebrations ever since UNGA unanimously approved a resolution to observe 21st June as International Yoga Day. He appealed to the people to practice Yoga in their quest towards a happy and balanced life.